One of Marvel’s zaniest, craziest, most colorful books to come out of Marvel Now! comes to a close. Spoilers ahead! 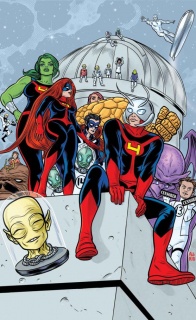 FINAL ISSUE! – “For All We Have And Are”
• The final showdown. The last FF member standing, Scott Lang goes up against Dr. Doom alone — and everyone knows the Ant can’t. The smackdown of the century.
•Plus an extra ten page bonus of F4/FF goodness co-written by Karl Kesel and the Allreds.

Since it’s inception, “FF” has been one of Marvel’s most “out-there” books. half faux-Silver-Age romp and half deep character study of where Scott Lang is post-“Children’s Crusade” alongside an eclectic cast of Marvel’s best and most obscure. It’s randomness was always one of its most appealing aspects, as it reached across the Marvel universe to bring together the Future Foundation, The Impossible Family, and a ton of other facets of the Marvel universe, including the literal Julius Caesar, together to fight against Doom.

Bringing together all those elements together, to craft an invasion of Latveria as seen in the last issues, has made for a compelling climax to the Lang vs. Doom story. Unfortunately, all the strands that worked great when brought together last issue are pretty disconnected here as deus ex machina upon deus ex machina solve the plot. Literally, The Living Tribunal shows up, points at Doom and bam we can all go home. All in all, it’s a pretty sudden ending that doesn’t really give the varied characters a real role in helping take down Old Vic. You’d think the sudden ending would give a lot more room for the other story elements at play but instead the biggest mystery (Ravona) is just kind of… answered? Yes, we’re given a name and some details but it’s still left pretty vague, especially since there’s no issues left that’ll really explain any of it.

Then again, I haven’t read the “Fantastic Four” series so… that might be a problem.

In spite of that, “FF” hasn’t really been a series that focused priority on the story above the characters and wild ideas. In that case, “FF” #16 delivers in spades.  First, some interesting new concepts behind the Pym Particles get introduced in a wonderfully illustrated diagram by Micahel Allred that shows the type of inventive thinking the series is renown for. The compelling feud between Lang and Doom doesn’t really come to that much of a close organically, but there is enough poetic justice to make it a solid resolution. In addition, Doom gets a surprising amount of character study especially when it comes to the relationship between his and his scars. In fact, Doom gets a surprising amount of the issue dedicated to him (and Lang) which contributes to what I mentioned earlier about many of the characters being sort of put on the sideline. Contrary to what a lot of this issue would have you believe, the series has a whole hasn’t been about Doom/Lang, it’s been about the FF as a whole; from the teachers, to the students, to Julius Caesar and, though the character work between Lang and Doom is compelling, they were hardly the entire book.

Thankfully, the ten-page back up co-written by Karl Kesel and Michael Allred (and illustrated by the latter) provides a solution: a space for some of the characters to unwind, albeit independent of the plot. Here, beloved fan-favorites The Moloids, Ahura, and The Jen get the spotlight that they were robbed from for most of the main story. Though it delves into a vague explanation of the Ravona story that I’d probably have a chance of understanding if I looked past one issue of “Fantastic Four” so I should probably quit complaining. Eventually all the wonderful character moments (Bless your little hearts Adolf/Luna) merge into a double-page spread that’s one of the most sincere celebrations of the Fantastic Four legacy. Which is weird since they didn’t show up for fourteen issues.

More importantly though, that spread is a celebration of Michael Allred whose distinctive Pop-Kirby aesthetic was the only choice for what’s essentially a post-modern take on the original Lee/Kirby “Fantastic Four.” Without his detail-oriented kinetic style, a book of this type would not be possible and for that we should all be grateful. Even though “FF” wasn’t exactly a perfect book, it was a distinguishing landmark in the vast swarm of team books that Marvel’s been birthing for the last year or so. It was one of the few series that truly looked in both directions at the same time, to the early days of the Baxter Building for inspiration and to the (Marvel) now for a modern, fresh story featuring a lovable cast of misfits that expanded the Fantastic Four family in a meaningful way. Farewell, Faux Four, Future Foundation, and Fantastic Four. And to you too Julius Caesar, Impossible Man, and Steve Wacker.

Watcher and Fam, you might want to stay inside come May.

Final Verdict: 7.2 – Though not the best of all possible conclusions, “FF” is still one of the funnest Marvel titles released in recent memory.