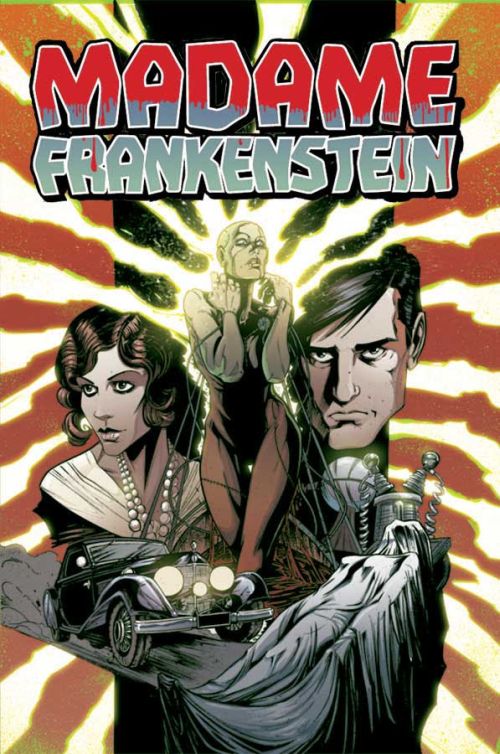 This Image miniseries reanimates a horror icon – and the results are electrifying. 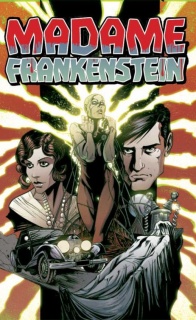 In 1932, Vincent Krall sets out to create his perfect woman by reanimating the corpse of the love of his life. He’ll soon discover, however, that man was never meant to peer beyond the veil between life and death. Mixing vintage horror with mythic drama, this new series by writer JAMIE S. RICH (You Have Killed Me) and smashing newcomer MEGAN LEVENS is guaranteed to send chills through even the warmest of hearts.

Most people who have seen Bride of Frankenstein will agree; it’s a strange film, and very different from Frankenstein, but it’s so odd and energetic that it works. “Madame Frankenstein”, on the other hand, feels like a re-interpretation of the latter part of Mary Shelley’s novel, laid out with a lighter touch than Bride but keeping to the same themes and aesthetic.

What Jamie S. Rich and Megan Levens come up with, then, is a comic that looks like a movie from the 1930s, but which moves according to different rhythms. We’re eased into this first issue with a dreamlike sequence, then dropped into the moment of the monster’s birth. We hop around a little from there, getting an idea of the circumstances surrounding this scientific feat.

However, coming on the heels of the intense opening scene, the middle section doesn’t quite fit. While its subject matter is partly rooted in the source material (Bride of Frankenstein specifically), it’s difficult to see how this interlude serves the forward movement of the plot. Certainly the mythological aspect of Frankenstein is being emphasized, but the exact import of this side of the story doesn’t come clear over the course of the issue.

Things come to a wrenching conclusion, though, with Vincent’s behavior in the final sequence falling somewhere between appalling and fascinating. The heart of this tale is the complex relationship between the creator and his creation, and the unforgiving way this antagonism is encapsulated makes for one emotionally-charged cliffhanger.

Megan Levens’ black-and-white art takes its cue from old Hollywood cinematography, favoring wide shots with tableau-like compositions. This constant distance informs the atmosphere; the eye is encouraged to wander around and inspect a scene, slowing down reading time and adding to the tension. Looming, expressionistic shadows ramp up the horror; and all the while, Levens’ bold lines and feel for scene-setting flourishes evoke the romance comics of the ’40s, all without feeling too derivative.

The melodrama runs high in this issue, but the nuance of the characterizations keeps the story anchored. With her bald head and elegant figure, our monster looks a bit like a fashion sketch from the era; but her expressions balance fury, confusion, and terror, making it clear that this being is quite different from the love of Vincent’s life. All the while, Vincent’s portrayal keeps us guessing; he’s a little too melancholy and photogenic to be trustworthy, and isn’t above striking a Byronic pose.

Barring a few pacing issues, “Madame Frankenstein” is a fun read that demonstrates an understanding of what makes the horror classics so great. At the same time, it’s still very much its own comic, mixing in new elements and maintaining a solid emotional center. This is a re-interpretation of an old story that lives and breathes.

“Madame Frankenstein” roars to life this May the 7th.