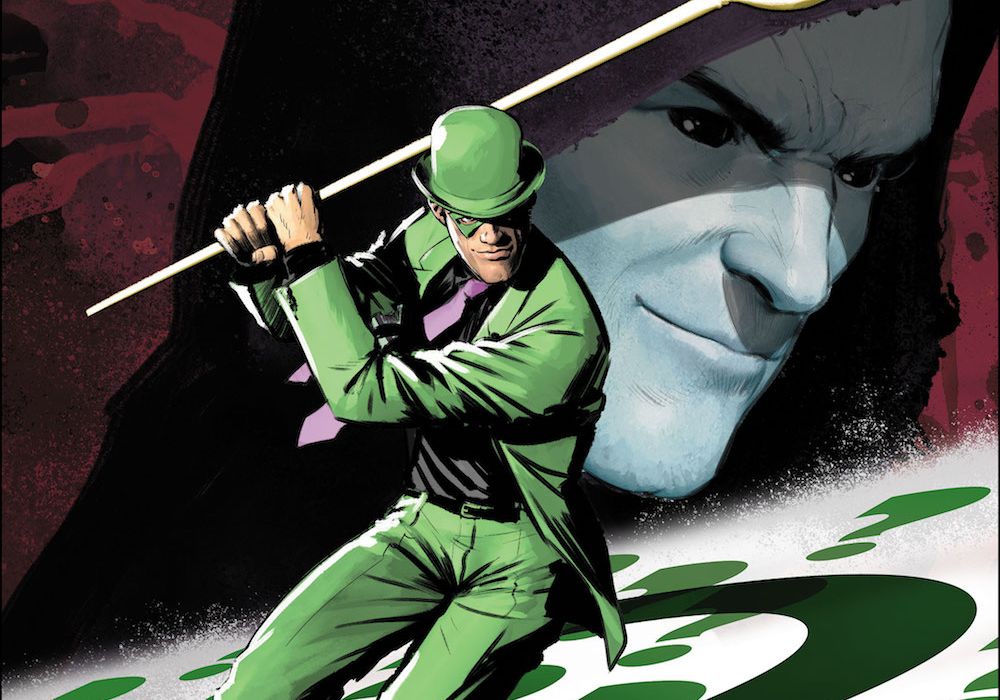 Spoilers for “Riddler: Year of the Villain” #1 ahead.

Despite what some people might think, the Riddler is a good villain. He’s got an interesting gimmick, a well-designed costume, a serviceable backstory, and a decent history of being just enough of a challenge to Batman to be viewed as capable, but not necessarily annoying or overdone.

Unfortunately, the Riddler is a decent villain lost in a sea of an excellent rogues gallery and a shared universe filled with much more memorable bad guys. Everything that makes him unique and interesting has been done better by other villains.

A repository of knowledge? Brainiac does that on a cosmic scale.
A mortal who dominates his/her enemies with their wits? Lex Luthor does it better and he’s richer.
A tactical and strategic genius? Not only is Bane just as smart, he literally broke Batman’s back.
A mentally challenged psychopath who is a slave to his gimmick? Two Face and the Joker.

So how does a villain like the Riddler carve out a niche in such a crowded space and establish his own identity? Well, that’s the question ‘Riddler: Year of the Villain’ seeks to answer and it’s up to the first issue to lay the foundation for this new character journey. 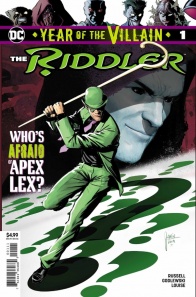 Lex Luthor has presented dark gifts to super-villains across the DC Universe, setting off what can only be called the Year of the Villain. Unfortunately, resources are limited, so not everyone got something. The Riddler is one such person, and he is most displeased about it. Was this merely an oversight or a deliberate slight? The Riddler is determined to find out which-and so should you!

So DC Comics is neck deep in their ‘Year of the Villain’ event, and at the moment Lex Luthor is jumping from book to book, handing out gifts and new powers to the various bad guys of the DC Universe for some mysterious reason, and in “Riddler: Year of the Villain” #1 he finally comes to visit Gotham’s master of riddles to give him a pep talk and possible gift. Meanwhile, the Riddler has decided to team up with an obscure Batman villain named King Tut in order to take out the dastardly Batman once and for all.

The highlight of “Riddler: Year of the Villain” #1 is the partnership between the Riddler and King Tut. Writer Mark Russell decides to play the two villains up for laughs and he succeeds. The two characters have fantastic chemistry by bonding over their obsessive commitment to their respective gimmicks. Whenever the comic focuses on their attempt at bringing down the Batman the comic takes a lighthearted approach with plenty of legitimately funny jokes and groan worthy puns. Their plan is hilarious, and filled with all the trappings of a cheesy Silver Age comic that knows how to not to take things too seriously. Everything from bad puns to warehouses filled with overly elaborate death mazes and traps is on display here and it’s actually reminiscent of the 1960’s Adam West Batman tv show, which a good place for these two characters since Frank Gorshin’s portrayal of the Riddler is legendary and his team up with King Tut is reminiscent of the loud and brash King Tut from the tv show played by Victor Buono.

Unfortunately, this lighthearted and funny romp is juxtaposed by scenes of Luthor lecturing the Riddler, who thinks that his fellow criminal mastermind is a joke (no pun intended) and needs to grow up. The comic flashes back to the Riddler’s origin story and reveals that he’s nothing more than a sad, lonely little boy who never grew up and just wanted to be loved by the people around him. While it’s sad to read a story that bullies its main character and seems to have nothing but contempt for the one of the character’s most popular interpretations, Russell doesn’t just mock the Riddler for the sake of mocking him and promises that this is just the start of a journey of self-discovery and possible change for the character.

In many ways, the art work is a reflection of the writing. Artist Scott Godlewski has an angular, semi realistic style that feels like it would be more at home on a more serious book. It works in the parts where Lex is brow beating the Riddler, but doesn’t help when the story is trying to be funny. While the artwork does have plenty of great, expressive moments, the story would have probably benefited from a more cartoonish and abstract style that focused on more exaggerated facial expressions with a slightly more developed sense of visual humor and comedic timing.

On the other hand, colorist Marissa Louise is at her best when making the book bright and cheerful, but falls flat when it’s time to get serious. The moments where the Riddler and the Sphinx are working together, and when Batman is attempting to avoid the Sphinx’s warehouse traps of death, are filled with rich and beautiful golds and greens that are a treat to look at and help make the comic look like something that belongs on the Adam West Batman show. Unfortunately, the book has a much more muted color scheme when Lex is talking down to the Riddler, which makes that section of the comic boring to look at.

“Riddler: Year of the Villain” #1 is a tale of two stories with drastically different tones. The parts of the story where the Riddler and the Sphinx are working together are zany and filled with tongue in cheek humor that knows how to be entertaining while not taking itself too seriously, while the parts with Luthor shaming the Riddler for not growing up and evolving are a definite buzzkill, but provide the impetus for some potentially interesting character development. The two stories don’t always mesh well, but it’s nice to see that the Riddler is getting some much needed attention and it will be interesting to see what happens next.

Final Verdict: 7.6-It’s a comic that strongly disapproves of its roots from the Adam West tv show, but there are some nice little funny moments and it’s all in the name of a potentially interesting character shift.