This miniseries truly is a grand old adventure, summoning up the exotic qualities of the era and location, but never losing that feeling that a guillotine blade is getting ready to drop… 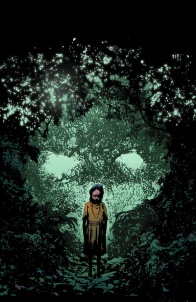 A narrow escape from hooded attackers slows the team on their mission to stop a cult’s human sacrifice, while their strange guide’s dark visions become more urgent but no less mysterious.

I didn’t really know how to talk about this without spoiling something straight away, so sorry, but this review will include spoilers from here on. Man, Chris Mitten blew me away with this opening vision sequence. It’s reminiscent of the way Mike Mignola, Jason Latour, and Laurence Campbell depicted the ‘Sledgehammer communing with the universe’ scenes in “Sledgehammer 44” and “B.P.R.D.,” while still being its own thing. This stuff was really cool. 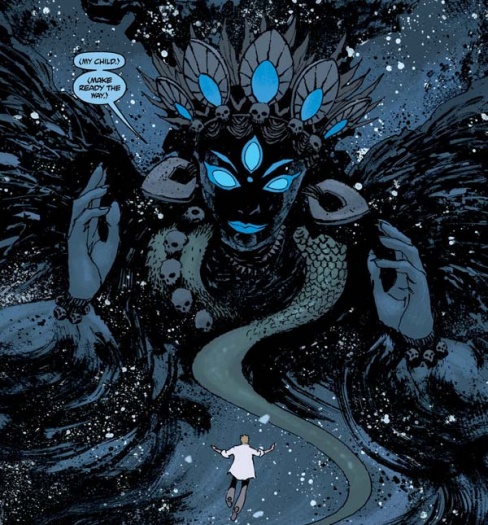 As Mignola’s universe unfolds, it keeps finding stranger nooks to explore, so I hope this isn’t the last we’ve seen of this sort of stuff. It makes Hecate / Kali / the Black Goddess that much more interesting… and she was already pretty interesting.

This issue delves further into Farang’s (I feel odd calling him this when we all know he’s Raimund Diestel) backstory, in particular there was a two-page bit delving into his past as a German soldier in the First World War. This was an odd moment, and seemed strangely out of character for Farang who had said very little about himself up until this point. It wasn’t odd because he told his fellow travelers this information, but rather the way that he told it, as though it were a history lesson. Given the context, that he’s trying to justifying himself to an angry Sandhu, I feel like this needed to be less specific, and more emotive. We needed to feel Farang looking at a memory he tried to bury with opium addiction. And there needed to be enough rawness there to make Sandhu be silent even after his grief-fueled outburst in the wake of losing McAllister.

Reading this sequence, I was reminded of a similar one from “B.P.R.D.: 1947,” which dealt with Jacob Stegner’s reluctance to talk about what happened to him. It did with a few well-chosen visuals and the rest was in Stegner’s eyes.

In Farang’s flashback, the visuals are simply illustrations—beautiful illustrations—but supplementary to the text, when really they should be the text. This sequence builds our understanding of Farang, but in way that keeps him at arm’s length.

Further on the group finds a girl and learns her backstory. This stuff I quite enjoyed, as it’s like an echo of “B.P.R.D.: The Black Goddess.” It grows our understanding of “The Black Goddess” without directly referencing it.

This is something I love about the Mignolaverse, the way it often indirectly handles the answers to its big questions. The answers aren’t even framed in the context of the question, so you get a feeling of the answer without ever really being directly told it.

So let’s take Liz Sherman for example. When she was first introduced back in “Hellboy: Seed of Destruction,” she was this pyrokinetic woman that worked for the Bureau. At that point, we didn’t know how much and to what extreme the paranormal affected Hellboy’s world. For all we knew, enhanced talents people were popping up all over the place. As we got further into the series we learned that powers in general were quite rare, and Liz’s were seemingly unique to her. Now we know she’s channeling Vril, “the Fire of Heaven,” and that’s very significant.

So the question of how Liz’s powers developed went from being of little importance to a major curiosity over the years. Which brings us to “Rise of the Black Flame,” which introduces the young girls that are used to awaken Vril or Shakti powers. Suddenly I find myself in a story that’s not even about Liz with all the answers I need. Sure, Mignola could one day explore Liz’s history further if he wanted, but if he goes no further, I’m totally satisfied with what I know now. I’ve got a sense of the connection and that’s all I really need.

When the story is like this, when it is evocative, I think “Rise of the Black Flame” is at its best.

Mike and I have spoken about Dave Stewart’s stand-out colors on this miniseries, and I have to mention his work again. This is the penultimate issue, the last moment before the plunge into the Temple of the Cult of the Black Flame, and Dave Stewart sells this by gradually making the whole palette bluer and less saturated as the issue progresses. This is not just afternoon becoming night either. If you look at the earlier issues, the nighttime sequences are much more green and the warmth from fire or lanterns is much warmer. In fact, looking back over the previous issues, even the scenes in the Temple of the Black Flame have been going from green to blue as the series progresses. It’s an excellent way to build tension.

I’m growing increasingly worried about this team. They’ve already lost McAllister and I fear they’ll lose more before the end. At least it seems Sarah’s safe for now, though I’m not entirely certain. I can’t help wondering if the girl they found is Kamala, the Black Flame’s wife in “Lobster Johnson: The Burning Hand” …

Overall, this was another great issue, however, I feel like the heavy exposition moments held it back and got in the way of Farang’s development.

Final verdict: 7.5. I’m totally entranced by Christopher Mitten’s artwork, and Chris Roberson has invested in this band of characters so much that I’m genuinely worried about them.