“Rise of the Black Flame” comes to the ending we all knew was coming. What’s interesting is how the story gets there. 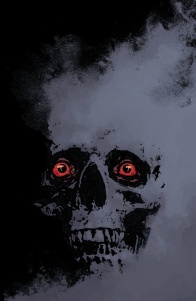 The heroes’ search finally ends at the temple of the Black Flame cult, but they don’t arrive in time to stop what they find there.

I’m talking about the final issue of this miniseries, so there will be spoilers.

How do you end a story like this? Logically we all know that this story will end with the birth of the Black Flame, and it should come as no surprise to anyone that ‘Farang’ / Raimund Diestel is the one about to be reborn. If you hadn’t figured it out by the end of the first issue, it was broadcast loud and clear in the opening of the second.

Ultimately, this is a prequel, and prequels always have that difficult problem of feeling like they don’t have an ending at all. Usually they are stories about how various pieces in a larger story are set in motion and so when they end, it’s simply because they’ve caught up with the events of the story they originally spun out of. I can’t say that I’m really a fan of this sort of storytelling. In terms of structure, it’s messy and at a certain point it feels like the story is ticking off a checklist of things we’re supposed to see.

That’s not to say that prequels can’t work—some most certainly do—but they do so by being about more than that checklist of backstory. And this is where “Rise of the Black Flame” succeeds. Right from the beginning this story was not just about Raimund. He was a part of the story, but he wasn’t at the center of it. We had had Sandhu, McAllister, Sarah, and Marie, and while we knew Raimund’s ending, we didn’t know theirs. This was unknown territory.

Where I feel “Rise of the Black Flame” stumbles—and it only really stumbles in the last few pages—is when its focus shifts to Raimund to the exclusion of all others. So when Raimund meets his fate in the Temple of the Black Flame, he accidentally burns Sandhu. Sandhu falls away with a cry of pain… and then vanishes from the scene. He’s not visible or acknowledged in any subsequent panels.

What happened to Sandhu? Did he just die? Did he run away? Was he silently writhing on the ground in agony? We have no idea what happened until the next scene when Sarah explains it away with a single line of dialog in the next scene. He’s an afterthought. From this point onward, the story is only interested in Raimund. The final scene with Sarah, Marie, and Sandhu isn’t there to tell us about any of them, it’s there to tell us what happened to Raimund. And I didn’t need any of that. Raimund being led away by Kamala was all I needed. Everything beyond that I already knew, to the point that the last page of this story, when we’re shown a scene that leads into “Lobster Johnson: The Burning Hand,” seemed entirely unnecessary and disconnected from the story that preceded it.

I knew Raimund’s ending. What I needed Sandhu, Marie, and Sarah’s. But they didn’t have one, and so the ending lacks a certain punch to what has otherwise been a very strong story. The plot became so interested in Raimund, it lost the other characters in the shuffle.

I think there was more to draw from though. There’s a panel near the end of Sandhu holding Raimund’s burnt tag, and it’s a powerful image, but it happens at a time when Sandhu’s already done a lot of his emotional processing. I would have liked to have him see it when he was still raw from what had happened. 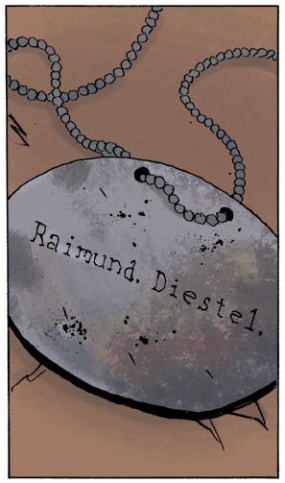 In the moments after Kamala led Raimund away, Sandhu must have regained consciousness, and thinking Raimund was dead, he would have found nothing left of him except his dog tag. The man had sacrificed himself, and until that moment, Sandhu didn’t even know his name. In the previous issue, Sandhu had decided Raimund was a coward, nothing at all like his honorable friend, McAllister. And yet in the end both men died to save the girls kidnapped by the Cult of the Black Flame.

I needed a moment like this, where Raimund’s sacrifice could mean something to someone other than just Raimund.

That said, I still loved the story. I really loved the way Raimund befell his fate, by killing the monks and unleashing the Shakti they had summoned. As the nearest living vessel, it all poured into him. I don’t fully understand why Raimund left with Kamala at the end, why he gave in and became the man of such cruelty we saw in “The Burning Hand” and “Sledgehammer 44: Lightning War,” after he had shown true courage in the moments prior to being burned alive… but I didn’t feel like I need to either. All I needed to know was that this broke him, and that’s there on the page.

I don’t need to tell you that this comic is beautiful to behold—Mike and I have been saying that since issue #1—but it’s worth repeating. This book has a flavor unlike anything else in the Hellboy Universe. Dave Stewart seems to know how to color practically every artist he works with, but this is something else. He and Christopher Mitten just click. I’m so glad we’ll get at least a little more later this month in the “Hellboy Winter Special 2017.” Personally, I hope Mitten sticks around for many more stories. His environments aren’t just powerful to look at, they evoke the emotional turmoil of the characters. His effects work (smoke, fire, splatters, sparks, and bolts) is bursting with movement—not just a direction of action, but a sense of volume, weight. It has a tactile quality. And most importantly, his character work is fantastic.

At the beginning of this story, I’d never heard of Sandhu, Sarah Jewell, Marie, and McAllister, but I got invested in them very quickly. Whatever shortcomings in the ending, everything else going on far eclipses them.

Final verdict: 7. The ending was a little rough, but this was a minor drawback to an otherwise fantastic series.