A harrowing tale that puts readers into a hellish landscape that they are lucky enough to have never lived in. “Road of Bones” #1 is a terrifying and grim look at an everyman thrown in a Russian gulag during the Stalin era. Spoilers Ahead 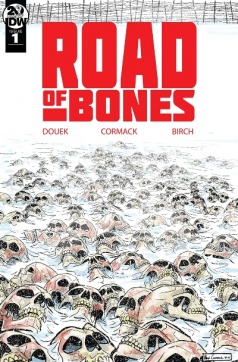 Roman is an every-man and convicted enemy of the state. His crime? Making a joke about Stalin at a party. Sentenced to twenty five years of work detail in a gulag for slander he tries to keep his head down to survive the ordeal. Previously employed as a chef he is able to spend some of his time in the prison’s kitchen which helps set him on a path to freedom, but whether in captivity or out, he may never be free again.

As Roman is going through the motions of each day on trench digging detail he, like the rest of the prisoners, sees true horrors all around him. Everyone is being worked to complete exhaustion and even death. Upon seeing a collapsing prisoner get beaten to death by a guard, he is then asked to bury the body right in the earthen bed of the trench. Though we have just met him, we sense that this task may be the final straw for him. At first it is unclear whether that means he will try to fight a little harder against the system or if the last light within him to fight at all has been snuffed out, but as the story continues to move at quick and deliberate pace we soon get some answers.

As he is also on food detail, we see Roman giving fellow prisoner, Sergei, an extra piece of bread. Something he clearly does not do lightly or frequently, but we already know he is a good man who will do what he can, when he can. In the dark of late night, after the prisoners have been fed, we see Roman leaving more bread under a wooden fence and possibly talking to someone on the other side. He is then promptly caught by a guard who assumes he is hiding contraband or hoarding food. He is then brought into sit down with the gulag administrator to discuss his indiscretion and punishment. It is at this point where we actually learn why Roman is in prison, a little about his past, and exactly what he was doing in the dark. When the administrator asks why he was hoarding food and that it could result in an additional ten years being added to his sentence, Roman replies that he was not hoarding it for himself or another prisoner.

It was for a “Domovik” (n.) Literally “household lord.” A protective house spirit in Slavic folklore, tutelary deity. Roman holds onto this superstition from being told about them as a child by his grandmother and felt that if he left offerings to the Domovik, it would make his time in the gulag a little more hopeful, or at the very least, bearable. This gets some laughs and that aforementioned punishment. Placed on double work duty on top of his kitchen work. This leads him to meet Grigori, a high ranking professional in the organized crime syndicates within Russian prisons. From here, Roman, Grigori, and Sergei devise a plan to escape and just as things seem to be going smoothly, a surprising and truly creepy revelation is made just as the issue closes.

Writer Rich Douek (“TMNT,” “Gutter Magic”) puts together a story that is simple enough, but is completely engaging, and without losing any strength, moves. We understand the gulag, the people within it and how things work in this world. There is just enough exposition to fill in all necessary story gaps and just as we learn exactly what we need from each scene, the story chugs right along to the next portion. If you have ever seen a movie or read a novel set in a prison, especially one in a country led by an oppressive government, you understand this story. The setting and characters are comfortable creations without feeling too much like over-used tropes and Douek’s creativity pours out with some truly original ideas. He crafts an intriguing prison story-cum-Grimm’s fairy tale. All this is paired with a well made, but familiar character study making for an great read. The pacing and originality are what makes this story work so well. It isn’t easy to take plot styles we have seen before and blend them into not only something new, but new and interesting, and he does it.

Handling both the artwork and colors is Alex Cormack (“OxyMoron,” “SINK”). A relative unknown in the world of comics other than a few outings, some of which were done with Douek, he is definitely one to look for in the future. He does an outstanding job on this book. Bringing Douek’s words to life he creates detailed set pieces and fully realized characters. While the script leaves certain things to the imagination, as too do the illustrations. We are shown exactly what we are meant to see from panel to panel. His work moves from exhaustively detailed scenes where we see every little thing to dark spaces where a single flashlight or lamp is the only source of light and we are only shown exactly what is in that light. It gives a realistic sense of disorientation and puts you in the heads of the characters in theses moments. In some scenes where there is extremely little or no light, but we need to see what is happening in these moments, Cormack uses a style that I don’t think I have ever seen used, or at least in this manner. He uses fine lines that come together to put forth just enough information that we can make out the actions and certain surrounding details. He has somehow captured, in a way, that feeling of walking through pitch black with your eyes open as wide as they can go and you can almost sense what is around you, and even if you can not physically see your surroundings, your brain is attempting to form that mental picture.

This is one area that his use of color is incredibly interesting and has made me go back to those panels multiple times just to look them over. He employs a sort of neon palette that brings together both that ‘mental picture’ feeling as well as that sensation of light and color we have when you rub your eyes really hard in a dark room. It is wild and he absolutely nails what he was going for. And those moments are just a small part of what makes his color work in this comic so astonishing. Every page is gorgeous and the final look of this comic completely conveys both real life horror and the hints of the supernatural that are sprinkled throughout. In a way, this comic feels very much like both “B.P.R.D.” and “Wytches” and the artwork is the main reason for that. Cormack understands that this story needs to feel grounded in reality so that when things start to take a turn for the other-worldly, we need to be just as surprised as the characters experiencing it first hand. As great as his art style is, his color work is just phenomenal. It is reminiscent of two greats (and personal favorites): Dave Stewart and Nick Filardi. Give this man more work! His use of light, shadow, and the full palette used is nothing short of perfect for this story.

So far, this was one of the most surprising comics of the year. At face value it promises one thing, delivers on that promise, and then gives us even more. Come for the horrific prison story and stay for, what is sure to be, a terrifying supernatural yarn.

Final Verdict: 9.0, A violent and heart-wrenching tale of pain and hopelessness covered in a snowdrift of spookiness.