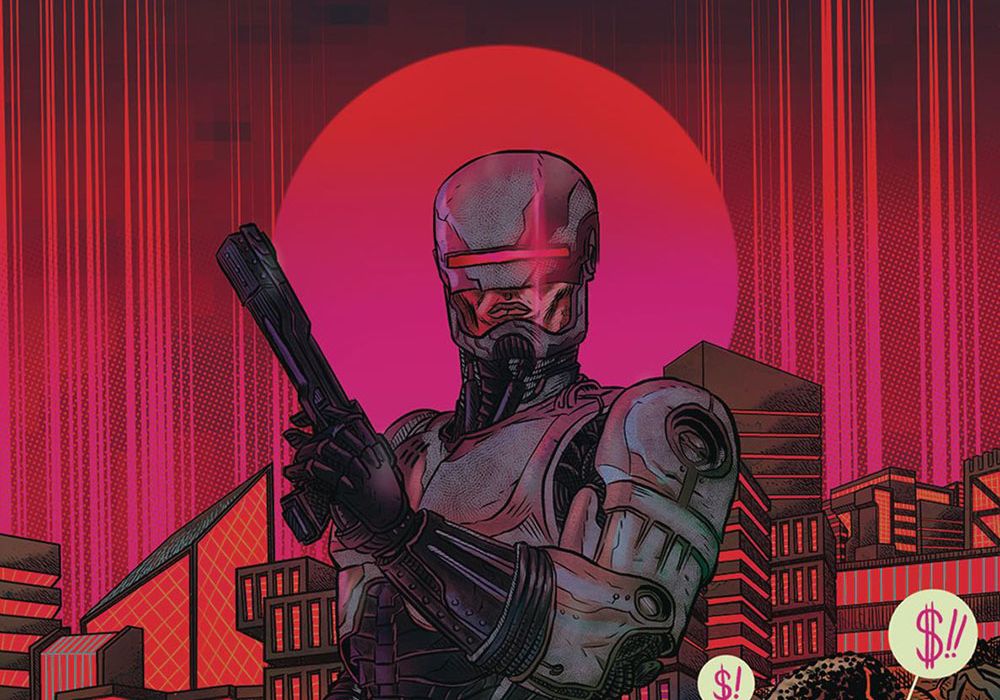 Boom’s “RoboCop: Citizens Arrest” series kicks off by presenting an unsettling near future both by evoking the darker side of ’80s nostalgia and the technological ubiquity feeding 21st century fears. 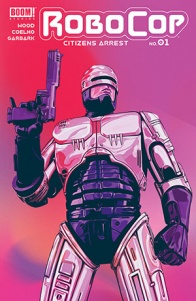 Brian Wood and Jorge Coelho present a provocative vision of a future where justice is crowdsourced and lethal. It’s been decades since the RoboCop program first began. Corporations have taken over the schools and the government, and law enforcement is the biggest private contract of all. Traditional police forces no longer exist as all citizens are encouraged and rewarded to spy on their neighbors. There is only one authority on the streets: ROBOCOP.

Taking a page from the British television series Black Mirror, “RoboCop: Citizens Arrest” returns to Detroit as a setting for a civilization that has reached its frightening but logical conclusion. Corporate greed and societal indifference to that greed in exchange for technological convenience and false security has come to fruition. More precisely, like the pocket worlds depicted in Black Mirror, this dystopian future seems as unsettling as it is imminent.

To call “RoboCop” dystopian may seem like a misnomer. The citizens who inhabit the book are largely depicted as willing accomplices resigned to the seismic change in their communities that has seen the dissolution of their police force in favor of sentient android peacekeepers dispatched by a phone app that encourages users to report crimes for a small fee in return for larger rewards. Business seems to be proceeding as usual, and humans, as we are prone to do, have adapted to this brave new world. Brian Wood, no stranger to stark visions of the future, presents all of this matter of factly by peppering readers with cues that are more familiar than alien. Cell phones have been weaponized. It’s a brilliant notion that packs a metaphorical wallop. Corporate-sponsored broadcasts no longer make any pretense of being objective, another logical extension of a polarized world where truth is fungible.

Wood’s dynamic script refuses to pander to readers as he presents these notions in a story that moves with lightning speed for a setup issue. By the final page, the wheels are in motion for the titular hero, sidelined for five years, to re-enter the fray. It’s perhaps the most impressive accomplishment in Wood’s script, that the story does not have to spell out any of the developments that led to this starting reality. Wood knows what to include and what to leave out. We as readers are already filling in the gaps or making the connections because we might be in the early days of living this Ayn Randian future already. If we’re not, we can easily imagine it.

To be fair, none of this is new for RoboCop. Since his arrival into pop culture in the eponymous 1987 film, the premise of an overburdened municipality ceding control of its police force to a corporation has been part of the narrative, but Wood plays with the notion that people who forget the past are doomed to repeat it. It’s another time-honored storytelling chestnut, but this time, the changes to society are more pervasive, and society’s quiet acceptance is perhaps the most startling layer to the narrative. When a key to the antagonist’s plot depends on the activism of the disenfranchised erupting into violent destruction, it’s like a twist on The League of Shadows. This time the cleansing fire is not to purge society of its excess but to rid it of its outliers and nonconformists. Wood’s story would be more frightening if it wasn’t so clever.

The artwork by Jorge Coelho also tempers the dread. Handling all the art duties himself, Jorge’s work is reminiscent of John Romita Jr. and Gabriel Walta. The lines are bold, and characters have a cartoonish quality without resorting to exaggeration. Crosshatching abounds, and a story which could have easily been draped in blacks, instead is hallmarked by a bright color pallet and rich texture. Readers familiar with the inspiration for RoboCop might detect a 2000AD Judge Dredd influence in the work of the illustrator from Portugal whose comics resumé deserves to grow once editors see his work here. It’s moody without being dark, letting Wood’s script develop the overall tone of the work.

“RoboCop: Citizens Arrest” could easily be dismissed as another effort to cash in on a reboot of a familiar cult character, but Wood and Coelho don’t seem to be content with an approach that trades completely on the character’s legacy. Following in the footsteps of industry veterans like Frank Miller, Alan Grant, and Walter Simonson, this team appears to be taking a less bombastic approach to the character by focusing on the dark satire that gives the character real staying power beyond just great character design. Those looking for action in this first issue might be disappointed, but the signs are there that point to the carnage to come coupled with a more thoughtful narrative on society and the willingness of some to rely on an instrument of chaos to restore order.

Final verdict: 8.0 – “RoboCop: Citizens Arrest” skillfully embraces the look and themes of the character’s origin story while updating it for a new generation of readers. Older RoboCop fans should appreciate the take on the future that seems more prescient than ever.