With no pre-existing knowledge or relationship with the franchise, the full creative team has a lot of work to do easing me into the nature of the franchise in “Robotech” #1. The idea of a futuristic military teamed with a cadre of space-faring robots is enticing and I can’t wait to see what kind of world author Brian Wood is able to flesh out while utilizing the full “Robotech” franchise. With such an incredible reputation, Wood has the chance to really break some new ground with the beloved series along with artist Marco Turini. How much of a reinvention or reboot will this title be and what will it be like to see a Japanese concept get an American makeover? 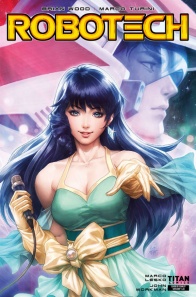 Not just another retelling of the Macross saga … In July, the story continues as we bring Carl Macek’s original vision full circle. Taking into account every iteration of the series, this new Robotech #1 casts a fresh eye over classic characters like Rick Hunter, Lisa Hayes, Lynn Minmei, Roy Fokker, Claudia Grant, and Henry Gloval. Brian Wood and Marco Turini take us back to a Macross Island where *nothing* can be taken for granted.

Writer Brian Wood has a lot to do in “Robotech” #1. After reading the last page, I wonder if he really got the chance to do everything he wanted to in just this first issue alone. The comic ends extremely abruptly, lacking the big twist or cliffhanger that might have propelled readers along to the next issue much faster. While there is a lot to like about “Robotech” #1, the comic just ends up having so much to do in the space of one installment there aren’t enough character moments, action, and new ideas to really make this a complete slam dunk. Being introduced to a brand new cast of character is a hard enough, but mixing in everything else this book tries to do plot-wise makes my head contort in a number of different directions. The comic wastes some space in the opening stages by setting something up that could have been explained and makes the pace of the comic less focused as a direct result.

Thankfully, Wood doesn’t forget to pepper in some engaging character work along the way. The relationship between Rick and Ray seems to be the core of this first issue as Rick tries to sit down with his brother amidst some crazy circumstances. Wood introduces readers to a larger cast of characters here, showing how they are related in just a few quick scenes. With only a couple pages, we still get a sense of who most of the larger players are in the cast and maybe learn a couple of unique things about each character. The title reminded me of “The Wild Storm” #1 in that it had to bring together lots of new/old characters while showing how they are related to each other while setting up the inciting incident in just one issue.

Turini crams a lot of detail in these pages. Turini is great at drawing the huge futuristic military outfits and robots the series and genre is full of. The page where the ensemble cast are at eating food at a Chinese restaurant has a beautiful and imaginative layout that puts a lot of information in one page while still looking appealing. When the more action-heavy sequences start to bring the title into a new direction, Turini adjusts nicely with the tone, showing some more dynamic aspects of his work in the series. Overall, I was happy to see the artist bring something different than your average penciller with a scratchy but detailed overall look. Turini’s faces are a little too inconsistent in the book for my tastes, but there’s a lot to love about the title.

“Robotech” #1’s disappointing finish makes this comic a little more muddy and unclear in what direction the it is going next. The comic has already gone through a number of huge changes in just the first issue and I’m not sure what the tone of it will be after this installment. Fans that are more familiar with the franchise may have a better of sense of what “Robotech” is, but this issue doesn’t quite illustrate what makes this property quite so beloved in the first place. There are a lot of excellent individual moments like the scene where the Rick and Ray meet or the moment where we get a look at Ray’s personal life but the issue doesn’t come together as one cohesive unit for me.

Final Verdict: 6.8 – “Robotech” #1 takes on too much and doesn’t accomplish enough in the series’s debut issue.