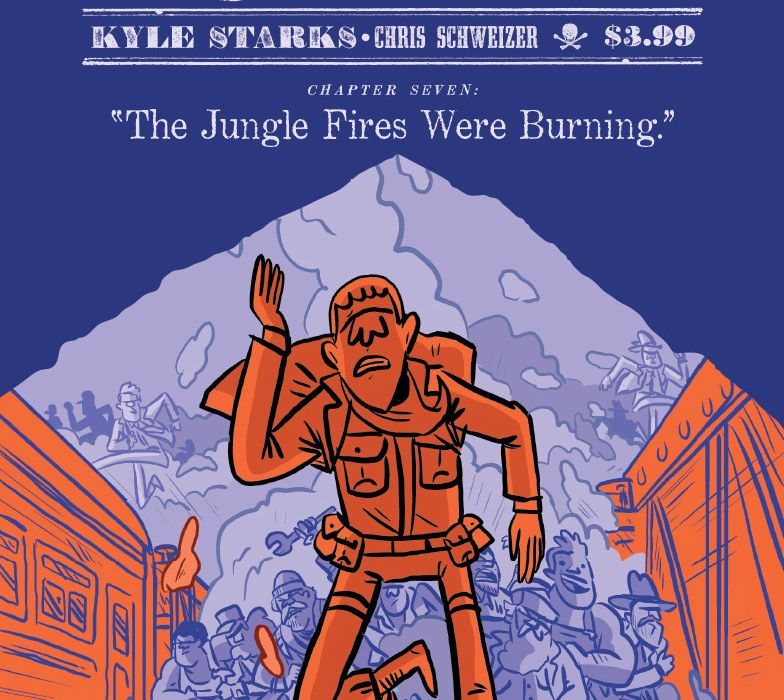 Kyle Starks’s hobo odyssey rolls along to the start of it’s conclusion in “Rock Candy Mountain” #7. But does the finish line retain the charm of its debut, or has the series lost steam along the way? 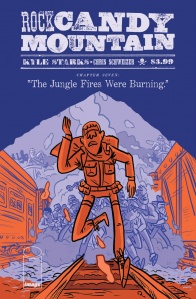 CHAPTER 7: “THE JUNGLE FIRES WERE BURNING” Old friends reunite and old enemies return as the World’s Toughest Hobo finds himself in the final stretch of his journey for the mythical hobo heaven but faces his toughest challenges yet as the stakes continue to rise. I do suspect you’ve seen some wild things in your days, Dear Friends, but this issue finds us in a trainyard war—a hobo donnybrook like you’ve never imagined! So boil up your glad rags, and grab your bindle as we find out if Jackson and company find salvation or a one-way trip on that westbound train to the boneyard! Part one of the two-part series finale of ROCK CANDY MOUNTAIN.

As much as it is a rollicking comedy, Starks ensures  the tale of Jackson and company is still one of heart. All the characters here are likable and Starks has taken care to build the relationships between them. It’s only seven issues in but it feels like we’ve been watching the bond between Jackson and Slim for an age, and they treat each other the same way. Starks also seems to have rubbed each character’s qualities onto each other: Jackson feels like he’s a little less vague and more friendly and Slim has adopted the whatever it takes attitude that Jackson oozes. Even characters like Big Sis, who hasn’t got a line of dialogue, feels well rounded through his actions and lack of speech. Being the friendly giant of the bunch, he’s easy to sympathise and makes the cast infinitely more loveable.

It’s undeniable Starks is a master of pacing, first and foremost with containing this epic tale in an eight-issue miniseries. This chapter feels like a great example of it. The focus is the planning of a heist and even though it’s the first of two parts, it works great on its own. Starks knows when to elaborate and when to delicately skip over details. For example, we get a great five-page sequential action sequence as Jackson evades the Hobo Mafia and leads them to Bull Monroe, a sequence which uses multiple panels to convey Jackson’s lithe movement and the ferocity of the Hobo brawl. Conversely, when Jackson meets up with Slim again, he finally reveals his life story, something we’ve been told previously so Starks smartly chooses to opt for an ‘AND SO HE LAID IT ALL OUT’ panel. Essentially, Starks is ensuring that we’re getting all the sweet, sweet meat of the tale, with none of the fat.

Of course, what “Rock Candy Mountain” and Kyle Starks are both known for is comedy, and this issue delivers it in spades. Starks lays out every joke with perfect storytelling beats, giving us enough that we’re satisfied but never cringing over comedy getting in the way of storytelling. Even better, each light moment feels right in tone with the character that says it, and never like a flashback or aside. When Slim is being slammed by his pest control job, he complains to his boss saying ‘PLEASE DON’T MAKE ME GO BACK… I SAW A SPIDER READING SUN TZU DOWN THERE!’. Similarly, every time the Hobo Mafia pretty much do anything, it’s with the bumbling confidence that makes them a charming comedy relief aspect. Especially when confronted by Bull Monroe, and all their safecard Mafia rings get stuck on their necklaces in their shirts, so they proceed to be wailed upon. It’s light, smart humour that doesn’t rely too heavily on crude language or actions, and feels accomplished for it.

The art here is as fun as it’s ever been, I’m glad to report. Starks combines a webcomic, Flash kind of drawing style with a pseudo Jack Kirby flair. It’s a great way to balance the more story-like and serious with the comedic parts of the story. The quick, effervescent line work allows for environments to be fleshed out nicely, which we get with the trainyard shots at the start of the story, and the hills and park area where the Hobo Mafia reside, allowing for some top-notch world building. However, the line work can feel a little too wonky in some sections – most commonly when drawing Jackson’s nose, which for example on page 13 seems to have morphed quite strangely as Jackson appears from the top of a fence. It works to comedic effect most of the time, but in sequential action sequences like this can feel a little shallow or lazy. However, in sections like Slim reuniting with Big Sis, the almost childish sketching works to great comedic effect.

The action and general character posing throughout this chapter is slick. Starks makes it seem effortless how simply he’s able to render crowds of Bull Monroe’s men, Slim squirming through a bug-riddled house sub-floor, or the Hobo Mafia trampling down a hill towards a fleeing Jackson. Yet each character has a distinct feel and care in their craft, lending a note of realism to an otherwise cartoon-like comic. In the scene with the Hobo Mafia debriefing about Jackson, each member of the Mafia has a different look, and there’s altogether about 12 different characters huddled into the same panel. One has a greyed Santa beard and sports dark sunglasses, one has a tall topped cowboy hat and an eye patch, and another has a Sherlock Holmes detective hat, long flowing hair, and a softer visage. It’s impressive, and simultaneously works for comedic effect: there’s a Where’s Wally vibe to exploring how many hilariously depicted characters you can find in a page.

I must point out, Chris Schweizer is the real unsung hero of this comic. A lot of what he works with is mostly flat, occasionally cell-shaded coloring, but he goes out of his way to make sure each scene sets a tone. Here’s the thing: It’s unique in every section. The opening has a harsh, red palette, which combined with the displaying of Bull Monroe’s ferocity reminds us of something like The Good, The Bad, And The Ugly. The next section is flat, pastel suburban coloring, to convey the set and the playful comedic nature of the dialogue. Then we get this light pastel coloring slowly fade to the more aggressive red subtly, as the Hobo Mafia scheme, proceed to chase Jackson, and then finally run into Monroe. Even smaller touches, like the supernatural glow of the Spear and the Devil blend well to establish the fantastic nature of each subject. It’s great coloring that fits in almost seamlessly with Starks’s art style.

“Rock Candy Mountain” seems to be showing no signs of slowing as it draws to its conclusion. Kyle Starks storytelling and character development is as sharp as his unique wit and comedic ability. It doesn’t hurt either that we get some great action sequences and fleshed out world building from the man, too. Couple that with some aesthetically excellent coloring from Chris Schweizer, and you have a great chapter in an even greater comic series.

Final Score: 9.0 – Kyle Starks and Chris Scweizer ensure that “Rock Candy Mountain” is by no means lumbering towards its end, with a breakneck pace, well-developed characters and a sleek, signature art style.