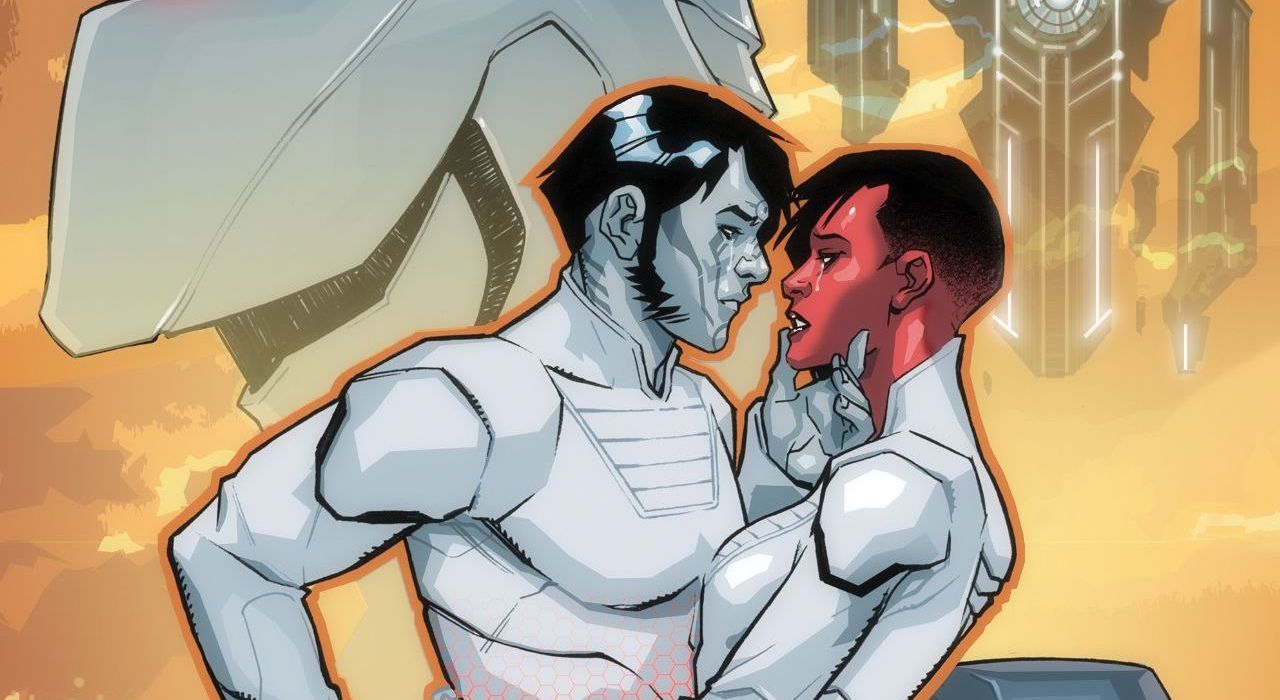 IDW’s “Rom” reboot has been well received so far, and has smoothly integrated into the Hasbroverse alongside fellow 80’s franchises “Transformers” and “G.I. Joe”. So it comes as no surprise that Chris Ryall and Christos Gage decided to dedicate their annual to exploring the Space Knight’s origin story. But does it contribute to the unique techno-fantasy mythos of the character? 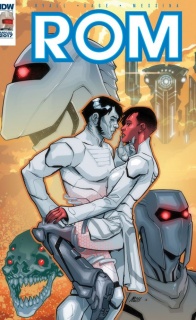 On the peaceful planet of Elonia, a surprise attack by the pernicious DIRE WRAITHS leaves the planet and its Solstar Order defense corps reeling… so what can one young explorer named Rom possibly do to help in the face of such savage an attack? Find out here as IDW proudly presents the full, unfettered origin of ROM, first of the Space Knights in a tale told by the series’ ongoing team of Ryall, Gage, and Messina!

As far as origin stories go, this one is pretty much by-the-book. You have a young, headstrong hero motivated by the death of a loved one. It almost feels like the potential screenplay of a “Rom” movie in delivery and pacing. However, the main difference here is the sci-fi setting, and it makes quite an impact on how this story progresses. Ryall and Gage introduce a love interest and best pal archetype for Rom, as they are thrust in the midst of an age-old intergalactic grudge. It works as great world building, establishing two interesting factions in the Solstar Order and the Dire Wraiths. Ryall and Gage populate the Solstar Order with a variety of characters, some like Commander Diavod being typically noble, but decidedly more notable is the revenge-motivated Orphion, who serves as a well written anti-hero type.

The Dire Wraiths are established as a sinister foe with their body snatching abilities, as Rom is constantly reminded by the Wraith that took over his mother. However, there’s little else we learn about them, and they come off as decidedly one-note villains with vague motivations. Ryall and Gage use them more as a direct opposition for Rom, one who is constantly reminded him of past tragedies and feeding his motivation to succeed as a Space Knight. One scene in particular occurs earlier on, when Rom’s mother first mutates into a Dire Wraith.

Ryall and Gage show they have good control over character development here, as Rom makes the decision of shooting his infected mother. It’s a surprising twist, as a move so cold and decisive seems out of character for the emotional and good natured protagonist we were shown at the start of the book. The writers keep the book well-paced in this way, avoiding dwelling too long on one moment to keep the plot intriguing. However, the characterization can feel a little odd at times, especially when Rom interacts with his overly promiscuous lover, Livia. A scene depicting Rom and friends easing off in the showers after training has Livia immediately jump from feeling sorry about the loss of Rom’s family to some very heated flirting. All in the space of a single panel. It’s somewhat degrading to have a female character constantly revert to this point, and while Livia is written well for the most part, the decidedly sexist moments make the reading somewhat jarring.

Series artist David Messina has been providing a consistent, clean sci-fi tone here from issue one, and it doesn’t let up here. His cell-shaded style is stylistic and fun, making for some great action scenes. The moment of Rom bonding to his symbolic armour is visceral and kinetic, lending well to the flow of the story as it is divided across three panels. When Rom arises from the water, Messina pencils him with a crackling energy that demands the reader’s attention and inspires awe with the classic design.

Messina’s art style is a good balance of realism and cartoon animation, which works well with the story. However, sometimes it can veer a little too far towards cartoon-y, especially in the case of the Dire Wraiths. Messina draws them incredibly menacing at his best, particularly in the climax of the story, as the Wraiths stand menacingly over Rom with a full moon and sinister lighting at their backs. It’s less effective at the debut of Rom’s mother’s Dire Wraith mutation. In a scene that should be disturbing and harrowing, Messina has a scarred and frail looking figure transform almost immediately to a gaping, odd looking Wraith, without the sinister shadowing that is almost symbolic of their design.

At its core, “Rom” is a sci-fi series, and Messina works well at rendering each scene with a surreal, alien planet environment. My personal favourite scene depicts Rom and fellow recruits flying to the Solstar Order Command Centre for the first time, a magnificently ornate city with towering pillars and simple, elegant linework. Messina shows his versatility in being able to contrast this later in the issue inside the mines. Messina could easily have drawn this as a generic cavern area, but instead details the walls with Alien-esque detail, and fills the rooms with intricate machinery. However, there’s little engagement with the environments, making them feel similar to a stage backdrop. I feel like this was particularly a missed opportunity to make the action scenes more interesting and interactive, but it still works as beautiful eye candy.

Messina and fellow colorist Alessandra Alexakis as always give a clean, vibrant sci-fi feel to the colors. They work best at giving previously ordinary objects odd coloring – a subtle touch that lends to the alien feel of the series. This works best in the opening scene, with Rom’s family inhabiting a home within blue-grey mountains and golden palm trees, immediately showing the reader that this is an otherworldly setting and adding to that suspension of disbelief feeling. Another more striking aspect of the coloring are the scenes of the Dire Wraiths standing with the full moon behind them. Messina and Alexakis use a variety of blues and purples to give them a very dark arcane nature, one which compliments their sinister nature to great effect.

Final Verdict: 7.2 – A solid origin story with vibrant art and expansive world building, but feels a little too familiar at times.