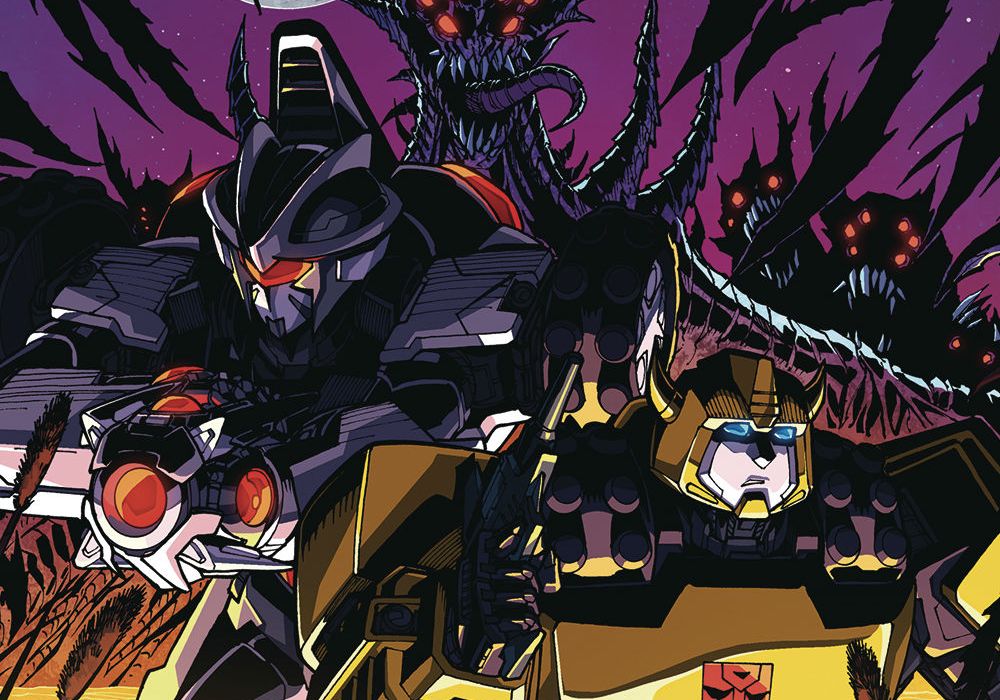 “Rom vs. Transformers: Shining Armor” #1 was a jolt of energy that introduced a lot ideas and characters that combined the Rom and Transformers Universe in an incredibly endearing manner. The series already had a fascinating new protagonist in Stardrive and the rest of the heroes. However, the second installment of the series shifted the focus away from the lead and capitalized on some of more well-known Autobots. The story of how Bumblebee intercepted the Rom heroes isn’t nearly as interesting as the tangled strands of morality that the protagonist is wandering through as both a Spaceknight and a Transformer. Hopefully, future issues will lessen the scope and bring back the focus on Stardrive while carrying some of the insane revelations and surprises that the first issue brought in spades. 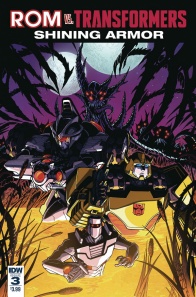 Crash-landed on a mysterious planet and pursued by both Decepticons and Dire Wraiths, the Solstar Knights and Autobots will have to set aside their differences in order to save themselves!

This comic had a first issue made me a believer in the Hasbro shared Universe and Rom’s role in the IDW stories, but this issue has my faith wavering slightly yet again. There is something inherently cool about Rom and the other Spaceknights but the characterization for each of the heroes makes them seem a little more milk toast and boring than they should be overall. By blending numerous different mythologies and being a rogue-inspired character, Stardrive definitely stands out amongst the rest of the cast. Lots of this issue is forced to wander through dull plot contrivances like watching Stardrive trying to convince Rom and the Autobots that they are all fighting on the same side. Thankfully as the dust of this issue starts to settle, each character is aligned on a certain side.

In “Revolution” I felt as though lots of this material had already been explored in detail, making it seem redundant to have Rom and the rest of the Autobots all try and get on the same page. Thankfully this issue isn’t just centered around an extended conflict between the Spaceknights, Autobots, and Decepticons. There is also the Dire Wraiths serving as the wildcard which could brew trouble at any moment for the case of the story. Starscream’s plot thread interweaves with this twist nicely and allows him to stand out in an interesting away from the rest of the Decepticons. Moments like these have also made me start to realize how strange it is that this story is missing both Optimus Prime and Megatron, but is full of both Bumblebee and Starscream, getting the two biggest Transformers character before the end of the series would be a fantastic way for the book to resolve.

Alex Milne is the strongest part of this issue. Milne draws each Transformer in incredible depth and makes sure to give each robot lots of expressions. There are a ton of different species, cast members and genres colliding in this narrative and Milne makes a strong distinction between each faction and character without making the page overtly cluttered or complicated. Some of the designs on Dire Wraiths look very impressive when they become the center point of the page. There are also some great moments of acting with a chilling final page here which adds a lot of intrigue that might not have otherwise been present in the book. Artist Josh Perez’s bright colors bring something extra to the series as well, showing just how colorful and creative the book can get. The ultra-bright backgrounds add a nice accent to the book. Milne also has a lot to do with Rom, without a face or a mouth, the artist has to make sure the character looks just expressive enough so readers can start to tell what he thinks or how he feels from his eyes.

“Rom Vs Transformers: Shining Armor” #3 is a solid entry to the series but lacks the surprises or huge, intense battles to get me absurdly interested in what’s next for the book. The story has a loose cliffhanger that could possibly have some interesting indications of the material which happened after this story as this book is a prequel to the currently IDW line of comics. This issue is packed with lots of great small details, for instance, Starscream’s motivations and plot get even more interesting and Stardrive makes some strong, surprising character decisions in this story, but I’m still not sure if there’s enough room for writers John Barber and Christos Cage to bring the mini-series home with only a couple issues in the story left. Going forward I would love to see a much greater emphasis on this new character so she can leave a lasting impression and possibly add something to the extended IDW Universe.

Final Verdict: 7.5 – “Rom Vs Transformers: Shining Armor” #3 dials up the tension with two groups of villains closing in on the Autobots and Spaceknights.