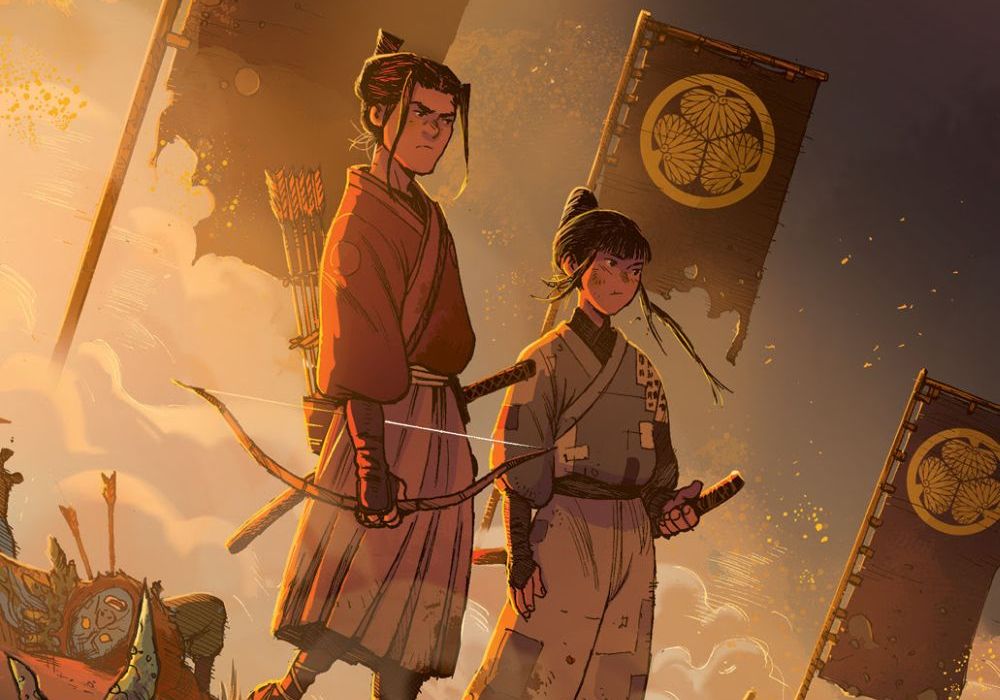 Author Greg Pak is broadening his sensibilities yet again with a new story set in Asia during the 19th Century. Former “G.I Joe” and “Prophet” artist Giannis Milonogiannis is illustrating the story. The series is even introducing supernatural elements with a mutated horde of demons joining the conflict. Will Pak and Milonogiannis be able to tell a story that feels diverse from others while retaining the fascinating genre elements readers are naturally curious about from the comic? Also, will the setting and time period of “Ronin Island” #1 feel truly authentic? 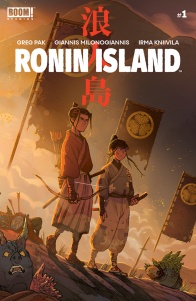 After a mysterious attack wipes out the major cities of 19th century Japan, Korea, and China, survivors from all three lands find refuge on a hidden island and build a new society.
Hana, the orphaned daughter of Korean peasants, and Kenichi, son of a great samurai leader, have little in common except for a mutual disdain for the other. But these young warriors will have to work together when an army invades the island with shocking news: there is a new Shogun and the Island is expected to pay fealty in exchange for protection from a new enemy…a mutated horde that threatens to wipe out all humanity.

Greg Pak and artist Giannis Milonogiannis do an excellent job of braving well-worn genre cliches with grace in “Ronin Island” #1. The series features dual protagonists in the form of Kenichi and Hana who both carry an impressive level of ambition. Hana’s devil-may-care attitude, in particular, lends a great deal of personality to the overall series. Pak starts the series off in the first couple pages with a pair of heroes imbued with lots of characterization. The duo are competing in a test against each other to be named First in Class. In the first six pages of the issue, Pak lends the title a really important plot aspect to get readers interested in the series right away.

The issue is set in almost one concurrent scene where Pak adds layers upon layers of complicated tension. Pak’s script eventually threatens the lives of everyone on the island. The issue is loaded with familiar genre tropes but they are allocated in a way that keeps the narrative grounded. The first competition scene becomes much more important when the final verdict is delivered and readers start to consider the full scope of the narrative. The second half of the title envelops the narrative in a darker tone expanding Pak’s vision for the tale.

Pak and Milonogiannis craft a simplistic narrative bursting with a strong level of energy. The duo is faithful to the time period and the issue has a carefully researched understanding of history placing “Ronin Island” comfortably in the realm of historical fiction. When the full narrative fuses together in the last sequence, Pak and Milonogiannis meld each compelling character together towards to battle a new antagonist. The structure of the issue as a debut is a spectacle to behold. The title carefully characterizes each protagonist before melding them all together to battle a shared enemy.

When the issue switches gears, it does so with a sharp level of focus that introduces the rest of the supporting cast. At first, it seems like Pak is going to take the issue in a more traditional direction before introducing another faction of the series that makes the tone lighter in some aspects and darker in others. There is an immense amount of craft and care in this debut chapter that makes this debut truly worthy of being called an all-ages comic book. The script is loaded with nuance ensuring it will appeal to older readers. The stark and restrained nature of the prose will also appeal to readers off all-ages.

Milonogiannis crafts astoundingly unique artwork for the script. Milonogiannis gets the opportunity to meld “Ronin Island” from the ground-up here. The expressive characters and solid line work show his incredibly distinctive approach to comic book artwork. Readers never have to guess about what Kenichi and Hana are thinking as their expressive, yet restrained facial features tell the story that Pak is trying to tell with minimal or sometimes no dialogue at all. Action scenes always carry an impressive sense of energy that is still easy to follow when considered with the quieter scenes of the issue. The last couple of pages of the story that introduce additional genre elements are also stunning.

While the artwork is great overall, Milonogiannis stumbles with some of the backgrounds in certain scenes. The figures are always incredibly detailed and engaging to look at, but the backgrounds and architecture from Milonogiannis can be distractingly sparse at select points during the issue. Also, a few of the layouts in the issue lack the imagination of some of the characters expressions. Each of the two spreads in the issue are wonderful and I hope going forward that Milonogiannis will take even more chances with the beautiful interior art between the covers of “Ronin Island.”

For anyone interested in the craft of comics, something has to be said about the engaging script behind “Ronin Island” #1. The issue effortlessly introduces a litany of compelling characters and scenarios before combining them together and pitting them into battle against a common enemy. Pak’s writing in the issue falls in line with his recent works with BOOM! and the issue even makes for a great spiritual successor to “Mech Cadet Yu.” While the creative team explores incredibly well-worn territory with the narrative, the level of energy and characterization throughout “Ronin Island” #1 has something unique to say about the world and direction of the comic.