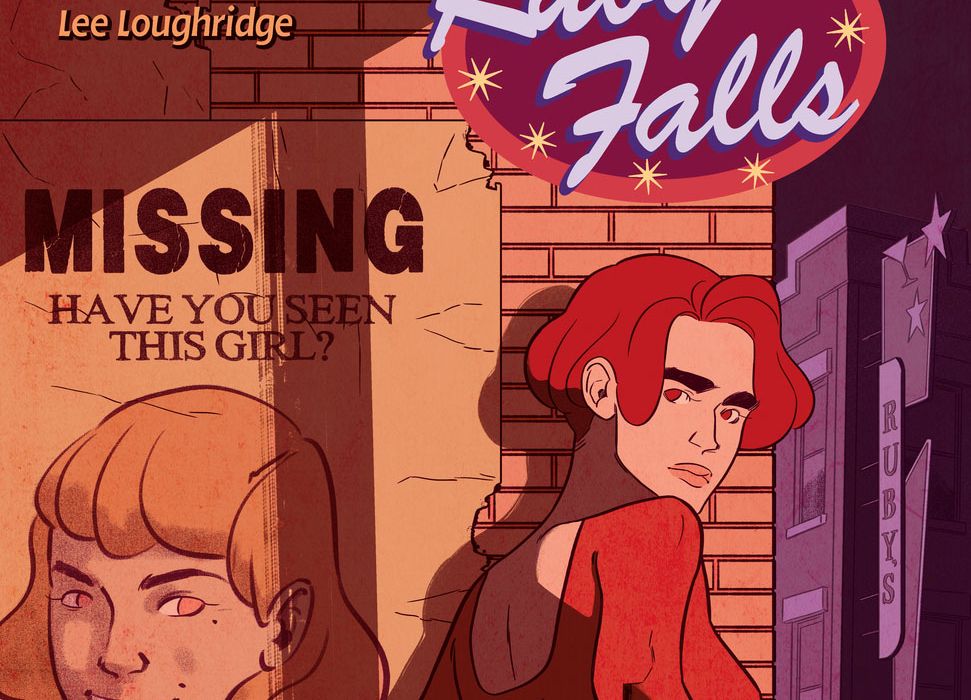 The premiere issue of “Ruby Falls,” the latest entry in the Berger Books imprint from Dark Horse Comics, oozes noir elegance. This is comic book industry veteran Ann Nocenti’s second mini series to be shepherded by the legendary editor Karen Berger. The first was Nocenti’s collaboration with David Aja on the hypnotic but currently delayed “Seeds.” From its first small town Americana pages, “Ruby Falls” presents itself as a much more delicate book than its predecessor and one that examines the fragility and fungibility of memory. The mystery that serves as the narratives centerpiece and undergirds the thematic motif comes from a recollection by the dementia afflicted grandmother of the series protagonist Lana. The half-formed revelation sends Lana on the path to investigate the decades-old murder of a young, would-be starlet named Betty Gallagher who was in the wrong place at the wrong time at a time when women’s places were at a man’s side or in the home. 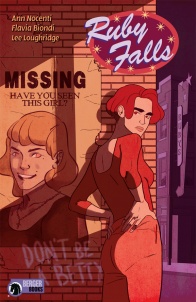 Ruby Falls is a sleepy town. But sleep brings nightmares, and Lana is about to wake up in the middle of her hometown’s biggest secret: the “disappearance” of infamously progressive Betty Gallagher during the mobster-ruled heyday of the old mining town. When details of the cold-case murder start to come out through her grandmother Clara’s foggy, dementia-jumbled memories, Lana becomes obsessed with cracking the case, even if it splinters the peaceful town-and endangers everything she loves.

“Ruby Falls” is a book that wears its intentions on its word balloons. Like its noir progenitors, characters talk about facts, causes and effects, and air their dirty laundry rather than stew introspectively. There’s little subtlety at work in Nocenti’s scripting which allows readers to plunge headlong into the narrative without guessing at character motivations. Lana is the youngest in a multigenerational family line that has called Ruby Falls home, and her desire to leave coupled with her inability to settle on a career in either of her divorced parents’ businesses or chart her own escape plan draws her to the story of the murdered woman. Her budding relationship with Blair, an acrobat who dances at the town’s neon-drenched gentlemen’s club, is one of opposites attracting. Blair does what she needs to do to make ends meet and attempts to talk sense into Lana, challenging her flippant attitude toward digging up old secrets for sport. Like most noir, the central figure is a deeply flawed one and motivated by selfishness. It’s a testament to Nocenti’s characterizations that she manages to give Lana more redeeming qualities even as she acts recklessly irresponsible.

There is a hard-boiled quality to Nocenti’s dialogue as the characters seem to pull no punches in their interactions. Tough love rules the day in Ruby Falls, and there is as little subtlety of speech as there is in Nocenti’s presentation of her burgeoning themes. The town’s slowness to welcome progress is the perfect backdrop for a tale about a woman who met an untimely end for simply not knowing her place, and Lana’s attraction to the case feels a crusade meant to shed light on patriarchal norms of the past in a place that is still guilty of paying lip service to progressive ideals. While the storytelling may feel a bit too on-the-nose, the formal noir aesthetic softens some of the more ham-handed bits. It’s hard to wish for more finesse when the structure and style of this first issue is such an ironclad stylistic homage.

Where the book’s real finesse comes is in Flavia Bondi’s delicate linework and Lee Loughridge’s dusk to dark color work. It’s one of the books more subtle tricks in that the setting sun mirror’s Lana’s grandmother’s own penchant for sundowning as she begins to lose her grip on the present. Loughridge’s colors perfectly complement Bondi’s stylishly understated renderings that look like a fusion of European and Manga influences. The pared-down simplicity of Bondi’s facial renderings is contrasted by the exquisite detail that she gives every background, and I could wax rhapsodic about the the two artists’ collaboration on the library scene, with the gloaming light filtering through the blinds, for more space than we have here. It makes the following exquisite pages set in Silks, the bar where Blair dances, almost pedestrian by comparison while they are anything but. Sal Cipriano’s slightly horizontally-compressed linework contributes to the book’s classy aesthetic. It’s a visual feast that also manages to be unfussy.

“Ruby Falls” #1 acquits itself quite nicely for a first installment in a pot-boiling mystery. In the book’s final panel, shadows fall across Lana. The scene mirrors both a panel from one of the opening pages where a net protects and ensnares her as well as the splash page that concludes the book’s flashback scene that unabashedly links Betty to Lana and evokes the metaphorical bars of a cell keeping women trapped in Ruby Falls’ provincial ideals that moonlight as violent masculine urges. Just as Lana is not content to let the sleeping dogs of the past lie, Nocenti doesn’t appear to be content to let her characters or readers off very easily either in this promising and provocative mystery yarn’s first issue.

Final Verdict: 8.0 – Nocenti’s examination of murder, memory, and themes of gender equality in small town rural America is off to a solidly effective start thanks in large part to its flawless spin on noir and to its visually sumptuous artwork by Bondi and Loughridge.