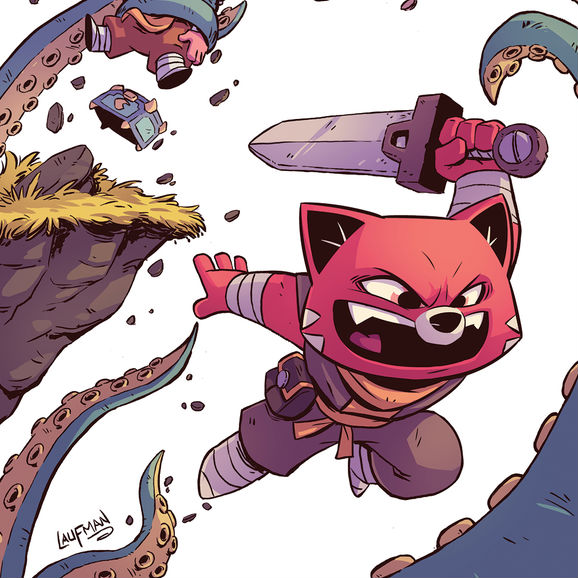 There is something about books that are written, drawn and coloured by the same artist. Not only are they few and far between, but they also share that sense of unity and cohesion that only the best multi-artist partnerships can show otherwise. What Derek Laufman delivered on the first full issue of “Ruinworld” is a whimsical, all-ages package, that doesn’t talk down to its audience and adds fun, strong characters. 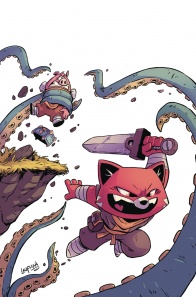 Writer/Artist Derek Laufman (Adventure Time Comics) brings his worldwide hit digital comics series to life at BOOM! Studios. Intrepid adventurers Pogo and Rex are on a quest for fame and fortune. Their discovery of a special map leads them on an epic journey through dangers, demons and old enemies. Just one problem-they’ve already lost the map. An all-ages comic about fun, friendship and screaming in the face of danger, perfect for fans of Adventure Time and Adventure Zone.

“Ruinworld” tells the story of Rex (the brave and snotty fox) and Pogo (the scared, yet loyal, pig), but it is clear from this first issue that series creator Derek Laufman has crafted a much wider world for these characters to inhabit. Readers are thrown in the middle of the story, hunting for clues as to what led the characters to this point of their adventure at the same time Rex and Pogo themselves are searching for clues for fabled treasure. This approach of never trying to take the audience by its hand is a welcome and refreshing approach to an all-ages books, which usually confuse excessive exposition with accessibility.

Before going too much into the plot and script of “Ruinworld,” more attention must be given to Laufman’s animated style and panel design. Every moment feels like an animated movie still image, every page a wider canvas where the action unfolds. World design is just as impressive: abandoned keeps, dungeons and medieval marketplaces share the same mold, adding to the cohesive feel of this issue. There seems to be interesting environments just around the corner of every page, inviting readers to look deeper and investigate further.

The choices taken for Rex and Pogo’s facial expressions are very on-point. There is little that needs to be explained about what role each of the lead characters will assume even if only basing it from the first pages alone. That is thanks to a detailed, although not cluttered, facial design, with eye movement and sizes doing most of the heavy lifting. Laufman knows how to leverage the liberties an animated-style book provides and puts it to good use to show, rather than tell.

Coloring is beautifully integrated to the art package. There is one particular sequence, where Pogo enters a crumbling tower where readers can see lighting dim, hues change from the bright yellows of the sun to the purples and greens of the underground. Pogo’s own color scheme also changes to reflect the environment in what can only be described as a full understanding of how light would behave in reality – despite the cartoony overall style.

Not to be forgotten, Montgomery work on lettering also adds to the whole of “Ruinworld.” There is a noticeable use of bolds, larger and smaller fonts, and even completely different lettering colouring that emphasises how each character is communicating with the others, their difference in tone and personality. Really noteworthy.

As to the world itself, story and characters. “Ruinworld” reads like a fantasy series inspired by the likes of Dark Crystal and Neverending Story, but told from the eyes and experience of a veteran RPG player. There are quests, side-quests and multiple environments, and even special items that trigger situations and enemies. While not delivered in any explicit way, it should be a joy for readers that also appreciate this type of game to see characters develop in the way portrayed in here.

Although Rex and Pogo do behave on a very stereotypical manner (the arrogant brave and the scared silly), that is not to say they are flat, on the contrary. The script allows both characters to have the chance to leave their comfort zone and show how they would react in different situations, while remaining true to their core. And having set that base, when the plot itself starts to unravel faster, the audience is already invested and cheering for Rex and Pogo to reach their desired finish line.

All in all, “Ruinworld” does not miss the opportunity to tell a true all-ages book, rather than a story targeted to the minimum common denominator. This is a truly funny, layered story with exciting characters, which just happens to be told in an animated-style, RPG romp of an adventure.

Final Verdict 8.7 – For an audience that craves an uncompromising series in regards to its style, purpose and sense of fun, “Ruinworld” #1 is a great way to start something that is set to be a promising series with multiple chapters and adventures.