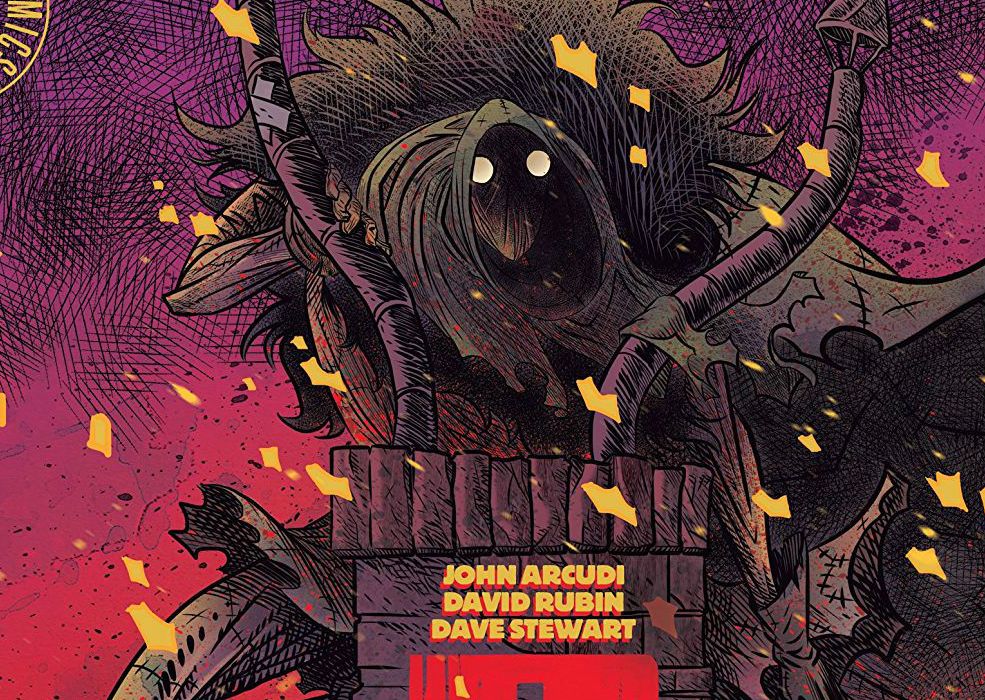 After over a year’s hiatus, Rathraq makes his return with a new artist and new first issue. How does this relaunch one of the more low key books of the last few year? Let’s find out. 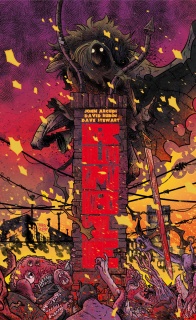 “SOUL WITHOUT PITY,” Part One Rathraq is back! But who is he, exactly? Once an ancient warrior god, he was resurrected as a sword-wielding scarecrow. And now, Rathraq has transformed yet again—or has he? JOHN ARCUDI and new artist, superstar DAVID RUBÍN, give you the new face of Rathraq and a new direction for the series when the critically acclaimed RUMBLE returns!

Relaunching a series can be a tricky thing. The (second) first issue has to walk a tightrope. You have to simultaneously catch up people that have never read your book before or those that lapsed while also having to provide a juicy premise for those that have stuck on faithfully and those previous new readers. I say this because I must confess: I started reading the original run of John Arcudi’s “Rumble” and enjoyed it, but never got to finish it. “That’s fine,” I thought, “With this relaunch I can get reaquainted with the series.” So, does “Rumble #1” manage to walk that tightrope unscathced?

The answer to that is: Sorta-Kinda.

“Rumble” #1 is very much the story about Rathraq. It starts with a tale of his past, about how he was a warrior god that fought in a war against the Esu, only for his soul to be planted into a scarecrow, which really did not stop him as well as his enemies thought it would. It delves into the events of the previous series, leading us up to this present issue with Rathraq supposedly dead. This issue shows friends and enemies mourning and lamenting over the loss. We have Cogan and Otis meeting again, embracing as if seeing each other after a long time and the wake of someone important. On the other side of it, we have Del, who is perhaps the one who most believes that Rathraq isn’t gone. The bits we have with Del are those of sadness, even when his friends Timah and Bobby try to cheer him up. He clearly feels lost after the impact of losing his friend, so when the weirdness begins to stir up in the city, it makes for a bigger emotional impact when that final page hits.

So, I said this issue sorta-kinda makes for a jumping-on point. Let me explain why. To be clear: this isn’t a bad issue. Arcudi is a master storyteller, the last decade of work (“B.P.R.D.” being the highlight) shows that in force. I just feel that he had to include a lot here and it does feel thinly spread. We get a check in with all the major characters from the previous series, but they -with the exception of Del- feel a bit fleeting. Like if you don’t have the full emotional context from before, it’s not going to hit that hard. It feels like the book is going to need some time to shake the rust off after being gone so long.

Having said that: I love the art.

There were sad people when it was revealed that James Harren wasn’t going to be returning, but I am glad to say that David Rubín (“Black Hammer”, “Ether”) is well up to the task. Let’s start with that cover. It’s beautifully Hellish, with Rathraq atop a chimney, all the fire and demons striding to reach this badass. David Rubín’s work is clearly inspired by Mignola, but a bit grittier, fitting with this more brutal Rathraq we are going to be getting in this new series. It’s ominous, grim, brutal and . . . well . . . cool.

The interior artwork is no slouch either. Whereas the cover was still and foreboding, the interior work is more exaggerated and cartoonish. Big expressions of emotion, standouts being Flashback Fleshy! Rathraq roaring as he charges into battle, Cogan’s joy seeing Otis and Bobby’s exacerbation when the weird and supernatural things start popping up again. In those flashback, Rubin switches up styles to bring a more caveman drawing-like look to Rathraq’s story that compliments the more detailed, brutal styles around it quite nicely.

When talking about the attention to detail, there is something specifically I want to talk about with Rubin: his use of ink blots. It’s used all over the issue, showing the grime of the city, symbolising gore and blood without becoming graphic and even the ashes of Rathraq’s immortal physical body after it’s destroyed. It’s heavy use, but it never feels overused and serves as a great enhancement of each scene.

What else can be said about Dave Stewart’s colorings? There is a reason we had to name our Colorist of the Year award after him, the dude would just keeping winning if we didn’t! And in “Rumble” #1 he continues that great work. Stewart’s work can create a drab mood without the colors themselves being drab, an example of that being the very last page which I won’t spoil. It presents the reveal with a dingy and ominous feeling, like the carnage is just about to begin.

So, the big question is this: Is “Rumble” #1 a good jumping-on point for a new reader? If I’m being perfectly honest: No. It’s a good book! Don’t get me wrong. But the effort to get everything in there to try and get a new reader up to speed ironically cuts out emotional reasons to want to continue. I highly recommend going back and reading the first series and then get started here. With Rubin on board, I truly believe this series will shake off its rust real quick and become a favorite once again.

Final Verdict: 6.7- The new artist puts aside concerns of visual quality, but the issue tries to do much and sacrifices a reason for a new reader to jump on.