Arcudi and Harren dive back into the world of the Esu with an issue that packs a punch every bit as powerful as the first run. 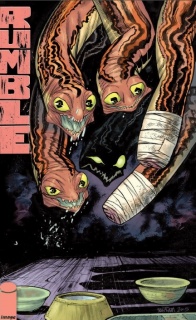 The Esu are in full attendance as they return in a Counsel of Monsters! And Rathraq is humbled by a new foe. New for him, anyway.

Not too long ago I was casting about for a comic to write a micro review about for our Wrapping Wednesday column. It was a slow week, so I took a punt on issue five of a book I hadn’t been following because of the flaming cover and seemingly incongruous name. “Rumble” #5 hit me harder than a punch from Rathraq and left me reeling, gutted that I’d only just found out about the series as the first arc came to an end. Issue six was a relatively stand alone instalment that dealt with the aftermath of Rathraq, Bobby, and Del’s firestorm of a final showdown with the mysterious Esu, but issue seven begins the second arc of the saga properly and, as such, I felt compelled to give it the write up it deserves.

Arcudi was, until recently, a mainstay of the Mignolaverse, contributing heavily to the “B.P.R.D” amongst other things. “Rumble” definitely has an air of “Hellboy” about it, and not just because both books have near immortal demi-gods as protagonists. But Arcudi’s world is distinct and far more personal than the world-ending sagas that are prevalent in the Mignolaverse. He’s crafted a delicate, bureaucratic world of cynical and philosophical ‘Esu’ (creatures that seem more closely aligned with amoral faeries than malevolent demons) and their complicated social dynamics and ever-shifting politics make for darkly comic reading.

This issue opens with a meeting of the Esu council discussing what should be done about the murderous nuisance that is Rathraq. The Esu seem to be, on the surface of things, largely paralysed by protocol. Arcudi’s scripting for these creatures is a beautifully balanced mix of homespun Americana and high-brow courtier speak that perfectly portrays the feeling that this strange group have been living on the fringes of society since forever, contributing but never fully accepted, similarly to the aliens in Men In Black.

This makeshift courtroom drama plays out against a reclusive Rathraq (and his trusty three-legged dog Apache) as they come to terms with life in seclusion. But, after some mystical jiggery-pokery from a couple of the more radical Esu, He is drawn out of hiding and back into the lives of Bobby and Del, just as they were coming to terms with the fact that their friend might have disappeared forever. It’s a smooth, straightforward set-up for the arc, but Arcudi’s strong characterisation and subtle humour inject it with all the personality it needs to draw you back in for more.

And, just in case Arcudi’s input wasn’t enough to guarantee a second look, Harren brings his absolute A-game to this issue. A big pull for me initially as far as this series was concerned was the character design, and Harren has pushed this even further in the opening to the second arc, with a slew of the most diverse and inspired Esu showing up for the council meeting. His mish-mash of recognisable animal parts, alienesque features, demonic horns and claws, and dishevelled homeless-looking humanoids tie the myriad mythologies and beliefs that “Rumble” references in its narrative together in one sweeping, visual statement. Under Harren’s hand the Esu become a much more ramshackle collection of disparate beings. This lack of visual cohesion is hugely important when coupled with the internal unrest that becomes apparent in this issue.

His slightly exaggerated, cartoonish style feels at its peak when he’s illustrating a chase scene or a graphic fight, but Harren has also clearly put a lot of thought into the more subdued panels and rarely misses an opportunity to inject something extra, whether it’s subtle foreshadowing, a reference to a previous issue, or simply some visual humour, into the background. This issue is lighter on action than its predecessors and Harren uses the increased amount of conversations, arguments, and debates, to really demonstrate his control of expressions. The two most obvious examples of this are probably the two least similar looking characters in the book, Cogan and Rathraq. Cogan’s grizzled, cunning face is the perfect canvas for a multitude of emotions, and Harren uses a great combination of canted angles, crooked expressions, and heavy shadows to portray how tricksy the old Esu is. Meanwhile he manages to make you really care for the straw-stuffed faceless Rathraq entirely through manipulation of his body language. After a particularly humiliating scuffle in the sewers, Rathraq drags himself up to the street, and back to his hideout, the very picture of emotional and physical defeat. he’s little more than a silhouette with two glowing orbs for eyes, but Harren captures something so recognisably human in his motions that it’s hard not to sympathise.

This book is difficult to describe in one quick soundbite. It’s an adventure story about swords and sorcery, but it’s also about honour, and treachery, and beyond that it’s about redemption, on a personal and social scale. Arcudi and Harren have managed to craft a book that reads as a fun-time blood-spattered romp but still packs an emotional punch. It’s been one of my must read books ever since I stumbled across it and I can’t wait to see what the second arc brings to the table.

Final Verdict: 8.8 – Well balanced and wonderfully beautiful. The second arc is off to an amazing start.