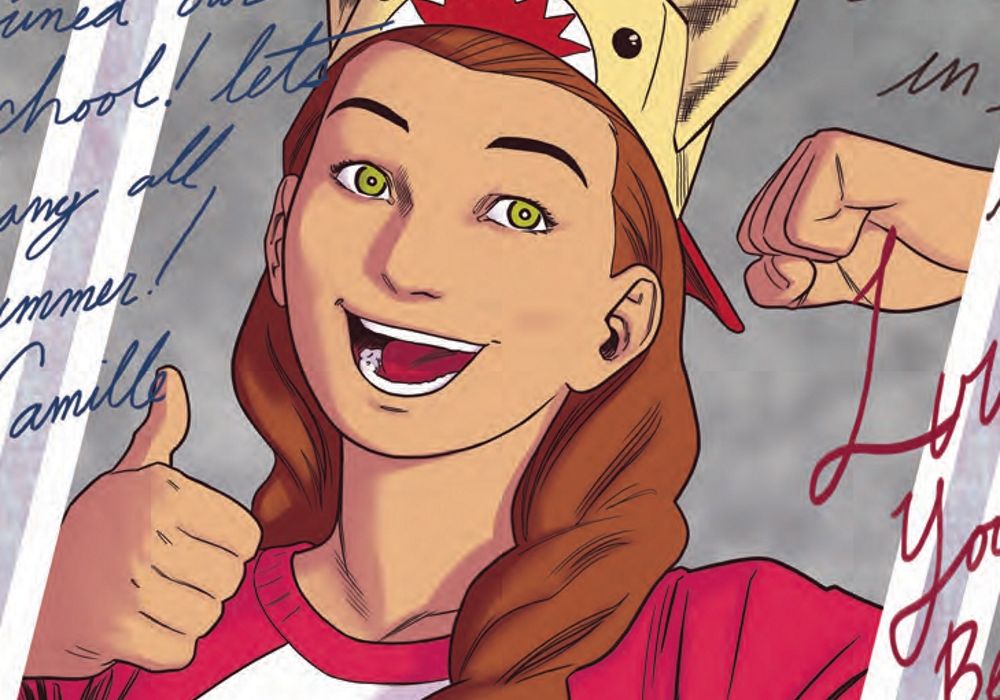 A great series with a great creative team should automatically be great, but comics don’t always work like that. That’s what makes them so interesting. Good writing, good characters, good artwork, they seem like the necessary ingredients to a perfect issue, and they are, but you need something else. It’s where the elements come together, and enhance each other that a good comic becomes a great one. 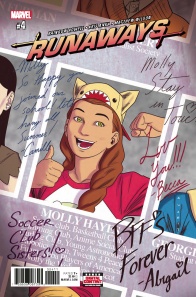 • The next stop on the Runaways reunion train is to pick up Princess Powerful, A.K.A. the best Marvel character of all time, MOLLY HAYES!
•  Gert and Co. find Molly living quite happily with her grandmother.
•  Wait, that can’t be right, can it?

Recently, Marvel books have leaned pretty heavily on established authors to pen comics. This has worked pretty well so far. Just look at the success of Ta-Nehisi Coates on “Black Panther” or Saladin Ahmed on “Black Bolt.” Rainbow Rowell seemed like the perfect fit for “Runaways,” but there was always going to be a learning curve for her to overcome with a new medium.

As it stands, her character work is top-notch. She takes the book to some pretty weird places, and that weirdness is the most interesting part of the story. Gert has been saved from death, and jumped two years into the future. Now all of her friends are older, including her boyfriend Chase, and younger pal Molly.

In a lesser comic that age difference would be gross. Gert clearly still has feelings for Chase, but she’s something like sixteen and he’s going on twenty. Instead, it’s the most fascinating drama in the issue. Gert is weirded out that Chase is now a coffee drinker, to which Nico points out that she’s always drank coffee. “I drink coffee to spite the adults in my life,” Gert says, “I don’t drink coffee with them.” That’s the conflict in a nutshell. Gert can’t cope with the fact that due to comic book weirdness, her teenage boyfriend has abruptly, from her perspective, become one of the adults in her life.

Similarly, Kris Anka is perfectly well suited to the Runaways. His artwork is fun, bouncy, and full of detail. The style is subtly inspired by manga- you can see it in the eyes and mouths. It’s the little things that make the art pure Anka. The faces are superficially similar, they have to be when they are so simple, so Anka gets a lot of mileage out of cartoonish features. Gert’s glasses are always a nit exaggerated, as is Molly’s grin. Grandma Hayes has some of the best wrinkles in comics, and the differences between Nico and Gert’s petulant pouts can tell the whole story of the comic in a single panel.

Oh, and Molly’s room is amazing. It’s a true highlight. Apparently, Anka solicited advice on what to fill a preppy teenage girl’s room with, and he totally nailed it. (It’s Pokemon cards). That goes to show that creative types should never be too proud to ask for help.

Great art, great dialogue, is this a perfect issue? Not quite. I love Rowell’s prose, but her scripting is still a work-in-progress. The comic is very wordy at times, when the artwork could do more of the heavy lifting. Most noticeably, the issue has no idea how big to make certain pages. It’s full of double-page spreads for little reason. There are two in a row for simple dialogue scenes that could have been toned down, turned into smaller grids, anything but these rambling pages.

On the other hand, that problem reflects one of the book’s strengths. There are no flashy splash pages because there’s not a single action beat. The whole issue is talking about feelings. It’s as grounded as a comic with a witch, a robot head, and a dinosaur can be. Most of the story is a conversation over grilled cheese and tomato soup (yum). It’s a testament to Rowell and Anka and the gang that Molly showing her bedroom to her friends is more interesting than whoever the X-Men are punching this week.

The issue also plays with decompression in a fascinating way. The final panel promises a supernatural twist; one that will doubtlessly lead to punching (or running away). Decompressed comics often feel like an establishing page and a cliffhanger with a bunch of filler in the middle, but Rowell’s dialogue is so fun that the filler is worth the price of admission. Even if the twist fizzles, I’ll keep coming back for precarious teenage group dynamics, and little character flourishes.

I hope Rowell sticks with comics. There’s a lot she can improve on, but she’s one of the most soulful, talented writers working today. What we are witnessing is her earliest effort in the medium, and it reads as a delight. The “Runaways” are back, and even if they don’t run anywhere in a hurry, the journey is going to be a delight.

Final Verdict: 7.9 – Despite some strange creative choices, “Runaways” is just such sweet fun.