Look, we’re not dumb-dumbs – we all knew that Marvel was going to attempt to link their cinematic/television and comic divisions more tightly. Anyone watching Agents of S.H.I.E.L.D. knows that quite well. “S.H.I.E.L.D.” is the latest attempt to integrate the Agents from television into the comics, and the first issue does so in a decidedly mixed fashion. 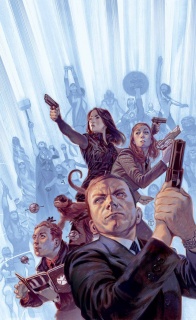 • High-tech weapons. High-stakes missions. High-octane adventure! For the men and women of S.H.I.E.L.D., it’s just another day in the field!
• Special Agent Phil Coulson brings together the best and the brightest, the gifted and the elite, normal people and superhumans from across the Marvel Universe on an as-needed basis to confront, combat and curtail dangers beyond the scope of any conventional peace-keeping force!
• Writer Mark Waid (DAREDEVIL) and a rotating crew of mission-specific top flight Marvel artists make you one promise: Every issue: Twenty pages. One mission. Unlimited budget. Unlimited imagination. Six periods. And a helper monkey. Welcome to Level Eight. Welcome to S.H.I.E.L.D.

The main premise of this issue is clear: establish Coulson as the best fantasy superheroes player of all time – and it does that in spades. Through flashbacks to his childhood, college days, and early days as an Agent, we see that he has kept meticulous notes/has an absurd memory for the skill sets, origins, and any information that could help take down whatever enemy was thrown at them. The team he puts together for this mission is exactly the type of group that only he could put together: Agents Fitz, Simmons, and May, plus the Black Knight and Valkyrie. This team has both the technical know-how and the sword-fighting ability to handle this mission, with a little assist from another Avenger in a ‘deus-ex-machina’ moment.

The reason that this premise is important for this book is because this isn’t being pitched as simply a comic of the TV show, or a new team book. It is supposed to be the hub for the entire Marvel Unvierse – when Coulson realizes that only the Human Torch, Ant-Man, and Aunt May can take down a villain, he has the rolodex and the respect to get them together. That is a really fun concept for a book – toss in the integration of the beloved TV characters, and you’ve got what appears to be a winner.

Especially because of the creative team assembled here: Mark Waid and a rotating cast of all-stars, starting with Carlos Pacheco. Pachecho soars in the battle sequences and character reveals – especially the Black Knight/Valkyrie unveiling – and he captures the insanity of a large scale battle better than almost anyone in the business. Waid does what Waid does, which is imbues his lifelong love of comics into the comics he writes. It wouldn’t be too tough to imagine a young Waid having notebooks filled with superhero stats, like a young Coulson does. While Pacheco is only on this one issue, the pairing works especially well when dealing with using the heroes for all they are worth – for recognizing exactly what each character can, and does, bring to the challenge, and utilizing them to their fullest.

However, it’s the TV characters that sort of muck up the works a bit.

Unfortunately, Waid’s hands are somewhat tied here – because the characters debuted on television, those versions will be the most recognizable by a longshot, for a long time. And so, he has to write these characters in a voice that isn’t exactly his. Whedon and his lieutenants have made Fitz and Simmons two of the more enjoyable characters on Agents, and have done so based entirely on their snappy dialogue. Waid is one of the best dialogue writers in the business, but there’s going to be a learning curve here, or, he’s going to break with the TV characterizations completely. Either option is fine, but I wonder: is there a demand for a book about the TV agents that doesn’t accurately reflect the TV agents?

The most banal and yet most clear example of this was Coulson calling Fitz “Leo.” I have seen every episode of Agents, and I couldn’t have, for one hundred million dollars, told you that his first name was Leo. With the exception of Skye and here one-name-like-Prince-or-Cher thing, every character is more or less called by their last name exclusively. Now, this isn’t a big deal – I want to stress that I’m not throwing a shit fit over a first name used – but it instantly creates a break between the show and the comic. Who knows, maybe that was the plan all along – all I know is that it took me out of the story.

As did the necessity to have them in those God-awful S.H.I.E.L.D. jumpsuits – the cover depicts the characters as we know them from the show, and if a new reader picked up the book, they wouldn’t recognize what they see inside. Part of that is due to Pacheco, an artist I enjoy, doesn’t really attempt to match their faces to the actors that portray them. That’s, again, not a bad thing, but for the first issue, it might’ve been a little easier on a new reader to go with an artist that could capture their looks better. I say that for a very specific reason: even colorist Dono Almoro can’t tell the difference between Valkyrie and Simmons. In two back to back panels he colors their hair incorrectly – I had to go back and check twice myself, because I am not the world’s leading source on either character, but it is clear: the one carrying the sword whose lettering is synonymous with Asgaardian should have the blonde hair, and the satchel-less one should be the brunette with hints of red. 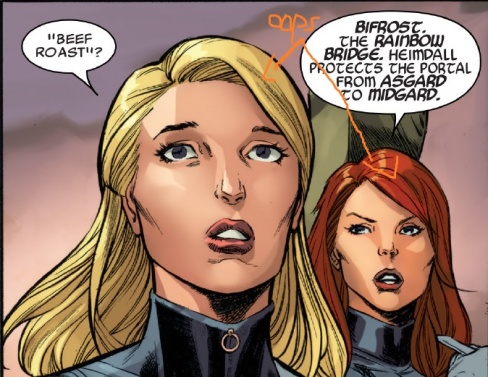 I’ll say this once again: none of these are big deals. My dollar is not being slapped down or taken away based on any of these little miscues – but they are all so easily avoidable. I get the fact that no creative team should be beholden to a television show that will run years shorter than the comic lives of these characters. I get that this isn’t a straight adaptation. What I don’t get is why Marvel wouldn’t put its best foot forward and, at least initially, present the characters that are presumably selling the book – there are plenty of places to see Hyperion in the background currently at Marvel – in a way that would make TV viewers more comfortable?

Of course, we are also talking about the mythical new reader: the amorphous construct that no one can really define, but everyone chases. Essentially, the pot of gold at the end of the rainbow. The same being that is evoked every time a comic movie opens big – “if we can turn 1/2 of those viewers into ‘new readers,’ well, then we’ll be set!” But see, here is where the correlation is a little different: DC has digital first comics that are set explicitly in their shows’ universe and, as far as I can tell, because finding digital sales figures is about as hard as catching a new reader in the wild, they sell well.

A bit of a rant: Why aren’t Marvel and DC comics getting commercials during their shows? “Enjoyed tonight’s Agents of S.H.I.E.L.D.? Pick up “S.H.I.E.L.D.” #_ in your local comic shop tomorrow” Oh, right, because comics companies can’t advertise their product to anyone but people already buying it. /rant

But the point stands: if the goal is to create something totally new, then why bring in the TV characters? And if you want to capitalize on the Agents success, why would you bring on a top notch creative team that isn’t going to like playing in someone’s extraordinarily narrow sandbox? Throw in small, weird decisions like making Heimdall’s mask cover nearly his entire face, allowing the coloring to fall somewhere between Idris Elba and the comic version, and you can’t help but feel like you’re being sold a half baked pie.

Of course, this is all moot: in a few months, “Secret Wars” happens, and who knows how everything shakes out after that. But the one and done, rotating artist, rotating cast of visiting heroes concept is too good of one to waste. So, Marvel, shit or get off the pot: either commit to this as being TV-related, or cut the tether quickly and definitely (kill off a main character, make one of the characters markedly different). This halfway nonsense doesn’t do anyone any good – it limits the creators, and limits the audience. Hardcore comics readers would rather a book that is in or out of continuity than a weird line-straddling one; TV fans want to know if Fitz’s adorable crush on Simmons will translate to comics.

Either way, it’ll be ok – the only way to really lose this battle is to stand right in the middle.

Final Verdict: 5.7 – A ton of potential buried under a muddled concept