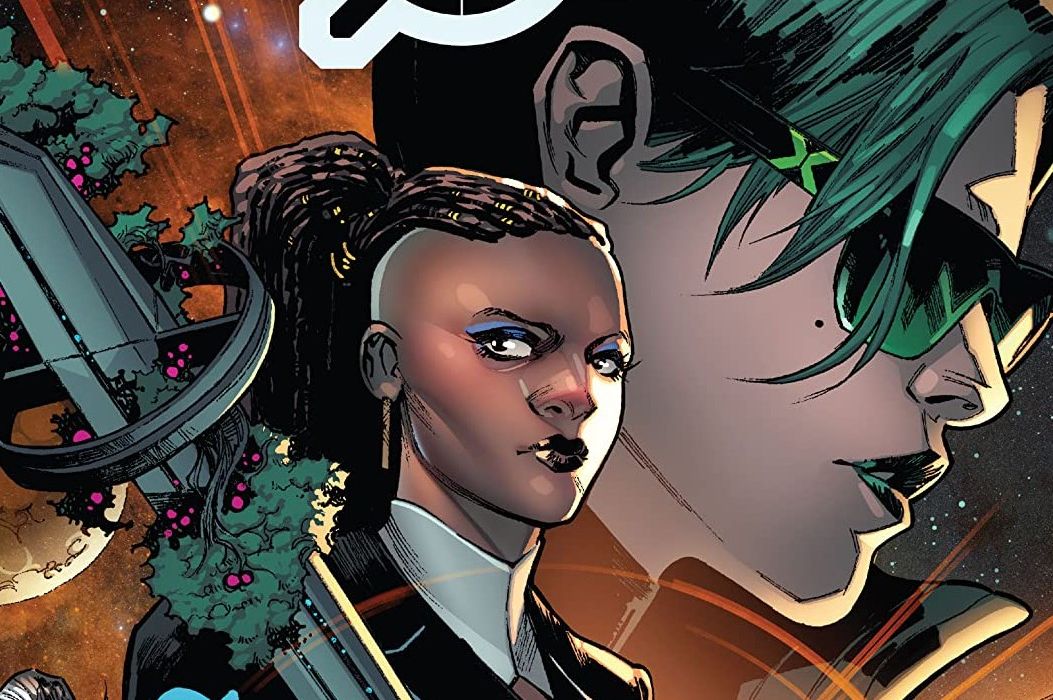 Can the newewst X-Team survive their greatest threat yet…a massive crossover? beware of spoilers ahead!

WHAT IS PROTOCOL V? The S.W.O.R.D. station is thrown in at the deep end of a planetary crisis as Krakoa battles the KING IN BLACK! While a cross-division team take on latex dragons from outer space, Abigail Brand prepares a deniable operation all her own. What is PROTOCOL V – and can the Earth survive it?

When solicits hit a few months back and showed that Al Ewing’s Mutant Space Epic, “S.W.O.R.D,” was being caught in the crossfire of the “King in Black” crossover, to say that people weren’t jazzed would be an understatement. However, Ewing has never been one to shy away from a challenge, and therefore instead of being derailed by the major event about Venom’s Goo Friends (I don’t know what the event is about), Ewing leans into the global threat and shows off this brand new team’s dynamics in response to a global crisis in a solid follow up to the series debut, joined again by Valerio Schiti, Marte Gracia, Ariana Maher, and Tom Muller.

Ewing approaches the crossover in a way that works so well for this book. King in Black is a global crisis which is just the perfect showcase for this interplanetary team and in practice, this issue works incredibly well even without the context of the crossover (which I don’t have). We get just enough information for the characters to do their thing. Ewing shows Brand as a leader putting a seemingly ragtag group of mutants into a well-oiled space machine. Frenzy gets to take Paibok on a diplomatic outing to fight goo monsters on Krakoa. We get an excellent Taki moment, where he casually hits a goo dragon with a space laser while figuring out communications. And we get some really compelling plots with some real left fielders, Fabian Cortez and Mentallo. Mentallo for sure rides the line of “This Guy!” that Peepers filled in the previous issue, but it’s a great flex of Ewing to get us to care about a truly D-List villain and his love of tanks both on-panel and in the data pages. Cortez on the other hand hints at a plot that is going to be compelling with him getting into Magneto’s ear about Krakoa’s foreign policy on “flatscans” or a derogatory term for humans for those uninitiated. As one of Magneto’s former Acolytes during one of his more out and out villainous era, this is no small element and it is so impressive that Ewing has put so much forward momentum a tie-in issue.

I will say I was a bit disappointed by the lack of follow-up from the threads of the last issue, particularly with the vague cosmic cliffhanger of the last issue. Also Manifold got the short end of the page time, but that is just a personal disappointment. I do like that guy. While it does feel like the King In Black threat kind of bumped those specific elements, I do trust in Ewing to follow up on these threads very quickly. However, despite how tight of an issue this is, it is still a strange fit as the second ever issue. It keeps the momentum going and is a good team showcase but I wonder how this will read in trade immediately after “S.W.O.R.D” #1.

While it’s no shock that Ewing can deliver a solid and compelling single issue with enough threads that keep us coming back for more, there’s a lot of praise to be leveled at the art team of Valerio Schiti and Marte Gracia. Schiti’s designs for the S.W.O.R.D team can never get enough praise and even though this is the second issue we’ve seen them, I will repeat again and again that Schiti has truly combined style and superhero in an incredible way. In terms of storytelling, Schiti remains an excellent fit for this book providing clear page layouts and knowing when to highlight the action, which is so dynamically rendered. Schiti’s art style is also such a great fit in this era of X-Men books, which visually has been set by the high bar of Pepé Larraz and R.B. Silva and Schiti scratches the very same itch. Whether it’s the use of texture in inks or the excellent face acting he really brings this book visually to the highest heights of this era. Another element of that unquestionable visual quality of this era is Marte Gracia, who has really held up a lot of the visual spectacle as well as consistency of this era. Gracia compliments Schiti’s linework exceptionally as well as giving a very cinematic atmosphere to the work as well.

Overall Al Ewing and co. pull off the difficult task of following up an ambitious first issue in the middle of a line wide cross over and they more or less stick the landing in S.W.O.R.D” #2. Ewing’s script takes King in Black in stride as a trial by fire for this new team and gives us excellent character moments and forward momentum to some of the the long threads that will both effect this title as well as the X-Line. Artistically Schiti and Gracia are firing on all cyllanders, making S.W.O.R.D” one of the best looking titles in the line right now.

Final Verdict: 8.7 – S.W.O.R.D” #2 is an excellent balancing act between King In Black tie-in and second issue to an ambitious opening.