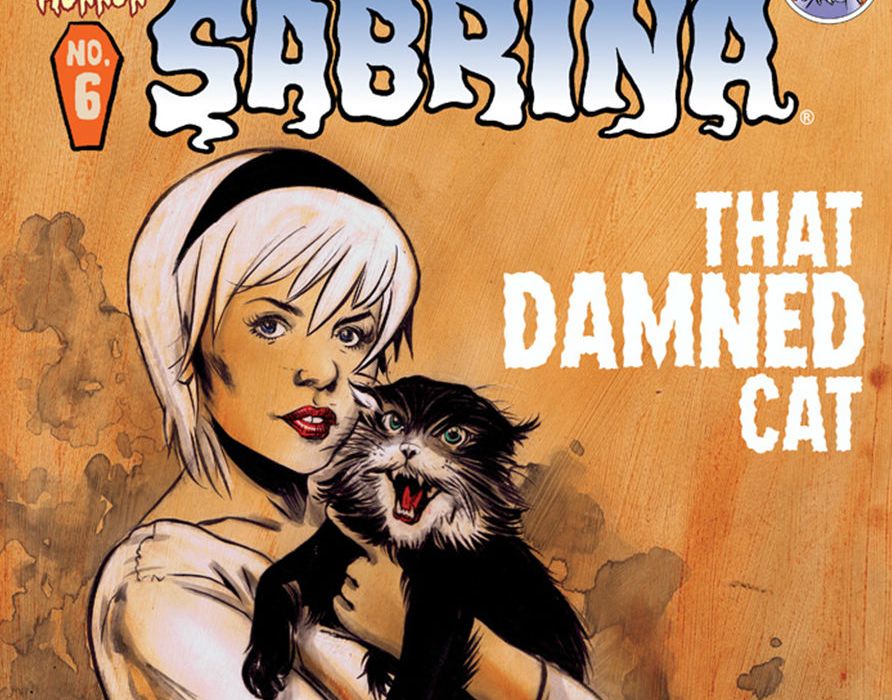 My first foray into Sabrina’s new, gruesome incarnation comes at the perfect time for fans old and new alike to find out why this witch is rated TEEN+. 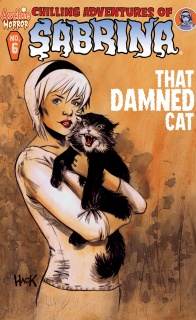 The ongoing series continues! “Familiars” is the perfect jumping-on point for the critically acclaimed horror hit Sabrina! Every witch needs a familiar, and through the ages, Salem has faithfully fulfilled his duties to Sabrina. This chapter lifts back the cloak of time to reveal the dark history of how Salem came to be and serve his master.

Archie Comics took a big leap of faith with Sacasato’s reworking of the world’s most famous teen witch. A dark and gritty re-imagining that makes Batman V Superman seem light and uplifting, “Sabrina’s” magic is rooted in blood and sacrifice, and there’s a sense of consequence that is completely at odds with the squeaky clean Saturday morning TV teen that I grew up with. I’m a huge horror fan, but somehow I’ve managed to let this book pass me by since its first issue. But with issue #6 offering a new jumping on point I grabbed it with both hands, and I couldn’t have been happier that I did.

This issue is, surprisingly, all but devoid of Sabrina. Appropriately titled ‘Familiars’, it provides an origin story for Ambrose’s two pet snakes, before opening up on a decidedly different backstory for Salem the cat. Sacasato is clearly a huge horror fan, and he wears his influences on his sleeve in this issue. Salem was previously a rogueish sailor called Samuel, and he shores up in the new world sometime around the events of Arthur Miller’s “The Crucible”. Stumbling across the community of Salem he quickly falls into a passionate relationship with would-be witch Abigail Williams. Sacasato manages to walk an ambiguous tightrope of puritanical morals and libidinous outbursts, keeping his coven fierce and powerful but never pinning them as outright evil. He sows his narrative with liberal nods to Robert Eggers’ recent cult hit film The VVitch, and while the allusions do at times feel like they threaten to overshadow Sacasato’s narrative, he keeps the balance well enough that his work is rolls closer to homage than actual story lifting.

Hack’s watercolour-style artwork is a superb counterpoint for the American Gothic stylings of Sacasato’s script. Hack’s subtle facial expressions and washed out, sepia toned colours keep this fantastical story rooted in reality. While his art is largely rooted in realism, with understated physical expression and a slow, creeping sense of movement to his panelling, there’s a slow, seeping sense of dread that builds as much in the shadow as it does through his character’s reactions. For me, though, the best part of this issue is his infinitely malleable version of Eggers’ ‘Black Peter’, the goat/goat hybrid/possibly the devil, who shifts back and forth between forms in a surprisingly unsettling manner.

The lack of Sabrina in this issue is a bold choice, but one Sacasato explains as an attempt to expand the world his characters inhabit. The postscript for this issue suggests that Sacasato felt confident enough to ‘follow the story in Chilling Adventures rather than dictate it from on high’, and for this issue, at least, it definitely pays off. Pace-wise, this issue definitely luxuriates in itself a little more than I might have liked. Having no real understanding of the world of this new “Sabrina”, this issue definitely represents a solid manifesto with regards to what this book wants to be. The tone and mood is dark and Gothic without straying into joyless or difficult to enjoy territory. while some of the references are a little on the nose in places, I appreciate the efforts to widen the world of Sabrina with some more literary groundwork.

This book is Horror in the creeping, insipid, paranoia-inducing way that I love. Fans of “Harrow County” and all the “Afterlife with Archie” books should definitely already be checking this out, and I’m already on my way back to issue #1 to retroactively revel in all the spooky storytelling that I’ve missed already.

Final Verdict: 7.2 Smart and spooky horror that chills and shocks in all the right ways. It’s not too late to get involved with this re-imagined teenage witch.