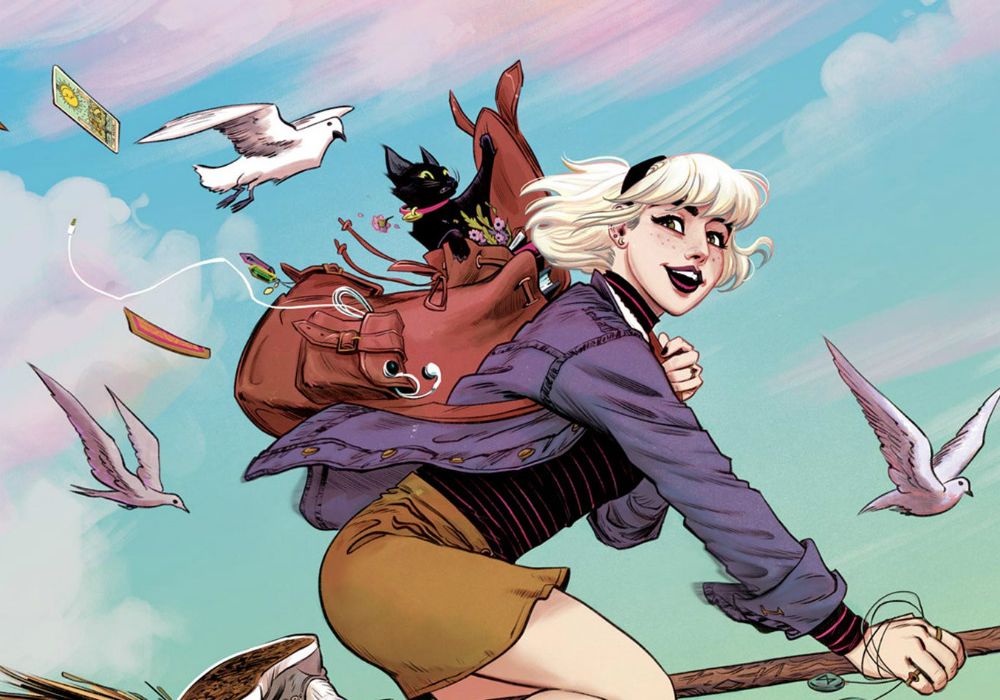 Sabrina is an Archie Comics character with a fairly well-storied modern history. From her excellent mid-’90s TV series to her recent well-received solo comic, and even her  . . . interesting Netflix revival, she’s considered one of the breakout stars of the decades-old publisher. Can Kelly Thompson, Veronica, and Andy Fish and Jack Morelli do this classic character justice? 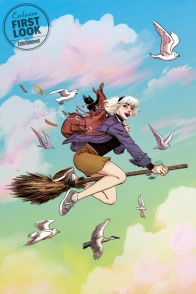 BRAND NEW SERIES! Sabrina is a teen witch who’s struggling with balancing the double life of high school and her burgeoning powers. Newly relocated to Greendale with her aunts Hilda and Zelda (also witches), Sabrina is trying to make the best of being the new girl in town which so far includes two intriguing love interests, an instant rivalry, a couple of misfits that could turn into BFFs, and trying to save the high school (and maybe the world) from crazy supernatural events. NBD!

Thompson nails how to write Sabrina as the estranged yet lovable outsider. Part of the fun of her character is that she’s relatable to people going to a highly Westernized high school from contrasted home life. At first, we see Sabrina trying to fit in, casting charms on her hair to make it blonde, while her aunt Zelda makes her a delightfully weird cinnamon juice “for extra protection and love.” Once Sabrina makes it to school, we see her immediately made uncomfortable by the school mean girl Radka, but the fun part here is that she has to tell herself not to curse her. Additionally, when she’s flirting with the ‘cute guy’ Ren in the hallway, she uses a spell to help woo him over. I love that we get this typically high school experience mixed with literal wish-fulfillment fantasy, it’s part of what makes Sabrina so enduring.

Thompson successfully builds her support cast and relationships here too with introducing Jessa Chiang, another outsider character. We spend enough time with them to watch their rapport bloom as they complement each other. Jessa contributes street know-how and keeps Sabrina humble, while Sabrina provides Jessa with confidence and acts as a buffer to mean girls like Radka. It’s great to see them establish such a solid relationship as early as the first issue.

Structurally, this issue works superbly. Thompson starts off with something of a record-scratch moment, having the climax with the Wendigo occur on the first page to disorient readers, before moving back to the start of the day without any transition sequences or warnings. It gives readers a sense of what to come without directly revealing if the moment is even real or just a dream. The actual sequence doesn’t actually occur until quite late, giving readers plenty of time to chew on the nature of the scene and push it to the back of their minds whilst lapping up the high school drama. Thompson surprises readers later by intertwining the vision with the high school content, revealing that the Wendigo was, in fact, (SPOILERS!) the cute boy and mean girl brother/sister combo of Ren and Radka! It’s a great mystery structure and leaves us with a juicy cliff hanger to come back for more next issue.

Veronica and Andy Fish do a stellar job of making “Sabrina The Teenage Witch” #1 a blissfully fun book over everything else. The pair inject a lot of personality into each of the characters inhabiting these pages. Sabrina herself is a mixture of worry, cynicism, genuine kindness and pretty much anything else you could imagine. Thompson’s ever-changing characterization of her means that the art has to be in constant flux, like with Sabrina’s smooth transitions from alarmed to suspicious when a guy helps her up with her cracked phone. At the other end of the spectrum, Ren and Radka feel perfectly rendered as the popular kids in school. Radka oozes that condescending, cool visage, and looks appropriately petty when annoyed. Ren similarly looks aloof and effortless when talking to Sabrina, proof that the artists can easily handle any type of character.

The issue has a great sense of movement thanks to Fish and Fish’s artwork. Every panel with characters never has them in a static pose – even when Sabrina is leaning unsure about school against her veranda, her body language shows it with a slightly tilted and nervous leg. Even little moments serve to help this momentum. When Radka throws a basketball at Jessa, she does so towards the camera, with the basketball popping out of the panels, propelled by kinetic speed lines. The real fun occurs at the end in the fight with the Wendigo, where the art splits the action into great one-two sequences. The second page of its appearance has exactly this, with the first two panels showing the creature swiping at Sabrina and Jesse and the latter two having them tumble away while the creature stalks them.

Colors are also done by Veronica and Andy, who provide a suitably contrasted, camp vibrancy to the book. We get hints of this at the start of the book, even in Sabrina’s home in the woods. The palette has a warm morning glow here, especially with the panel looking into Sabrina waking up, and builds it well on the next page by using Salem, the black cat, as a great point of color contrast. As we move further in, we get more sparkles and vibrancy as Sabrina uses a spell to change her hair color. The panel pops with a purple, hazy glow that feels reminiscent of the nineties show aesthetically. The final sequence is a great contrast to this brighter palette, with the colors looking reminiscent of a pulpy ’70s horror film poster. The blues and greens are warm and are accentuated by the shadows, and the use of orange to show action is a classic trope that fits in well with the Wendigo attacking.

With the new “Sabrina The Teenage Witch” #1, we get an ongoing Sabrina series that mixes the camp of the nineties TV show with the sleek modern approach of the Netflix series and injects it with the classic Archie vibrancy. Thompson is a capable scribe for the fun, diverse cast in this issue, and Veronica and Andy Fish prove to be capable of great facial and body language and emotional heights. If you’ve any interest in the character, this debut is worth checking out.

Final Score: 8.8 – “Sabrina The Teenage Witch” #1 is a delightful take on the compelling character, with luscious, campy art to elevate this debut to must-read status.