Saga is a book with an pretty unique position in modern comic writing. It’s part of an elite group of titles (outside of the big two) that feel as though they’re almost guaranteed an extended run-time. Now I know that’s more than likely a very big supposition, and in this business the line between renewal and cancellation can be razor-thin, but the consistently strong sales and overwhelming fan support of BKV and Staples’ epic… well… saga has definitely allowed the team to become increasingly inventive with the pacing of their odyssey. 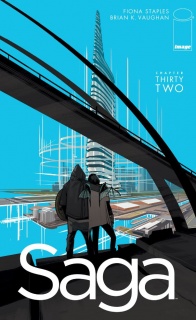 Upsher and Doff are back on the case.

Nowhere is this flexibility more apparent than in “Saga” #32. While the first few arcs seemed like relatively standard comic book fare in terms of pacing, with each issue picking up relatively soon after the last left off and taking us through a week or two of our fugitive lovebirds’ lives, this structure began to change as the real scope of the book started to become apparent. More recently Vaughan has started expanding the gaps between the monthlies while simultaneously truncating the time covered in individual issues.

This means that “Saga” #32 sees us reunited with a Marko and Alanna who have been searching for clues to their abducted daughter for an indeterminate, but clearly extended period of time. Their relationship has progressed off page in some ways (which is smart, because watching a predictable back and forth while they debated whether they could ever trust each other would’ve been incredibly dull) and yet stagnated in others. They’ve still not slept with each other, or even really touched each other, since they lost their daughter, and in a universe that runs entirely on either sex or violence, losing that kind of intimacy means they’ve got a long way to go before they can consider themselves reunited.  Vaughan picks up the action with the pair still on the lam as they track rumours of Hazel and Klara’s whereabouts to a depository on Landfall, a visit home for Alanna that could be the riskiest move the couple have taken yet.

This issue’s thirty two pages literally consist of just three scenes and takes place over the course of perhaps half an hour at most, meaning that it almost reads in real time. These extended scenes give Vaughan a chance to explore Marko and Alanna’s relationship ina much more natural way, with a tense, nuanced, and tragicomic conversation that covers everything from Marko’s newfound (again) pacifism, to Alanna’s increasingly believable Open Circuit acting ability, to the future of their relationship, all of which is laced with the unspoken fear of the potential loss of their daughter.

Staples has been beautifully consistent throughout this series, and the breaks between releases have all be justified by the high quality of the material she been churning out, but I feel like, artistically, this actually might be my favourite issue of saga yet. The length and depth of the limited scenes in this issue allow Staples to explore subtle, complicated facial expressions that underpin the action in such a deeply human way that you can’t help but feel the desperation in Marko and Alanna’s situation.

But Staples also manages to capture a sense of the adrenaline-fuelled, seat of your pants style fun of such a ridiculously terrifying caper. In keeping with Oswald’s ‘Opposite of War’ mantra which is clearly the grand vision of the series so far, you can feel the sexual tension between Marko and Alanna all but seeping through the pages. The spark between our star-crossed lovers is clearly conflict, and while they’re being chased through the depository by some of Staples’ weirdest alien creations yet she still manages to find time for touching, yet tentative, reconciliation.

As the pacing of this series becomes harder and harder to guess at, the best clues are to follow the children. While there is a distinct lack of Hazel in this issue, Vaughan lends the reader a helping hand by throwing back to a character we haven’t seen for a few issues, simultaneously reminding us of a group of characters who could easily have falen out of orbit, and pushing this fantastic tale in yet another unexpected direction. As far as independent books go, few have the legs that “Saga” has built for itself, and Vaughan and Staples’ willingness to experiment with everything from genre to characters to issue structure to release dates is what has kept this series as strong as it is over almost three years.

Final Verdict: 8.5 – Fantastic as always, this is a book that shouldn’t even need selling by this point, but if you’re not reading it, you’re missing out!