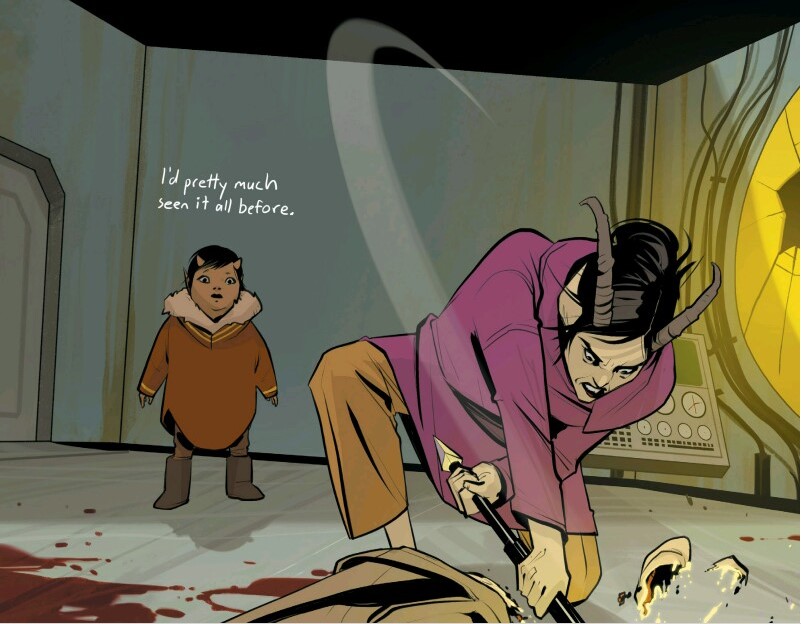 Alana and Marko embark on a mission and Hazel begins school. “Saga” charges on with it’s sixth volume. Read on for our spoiler free review. 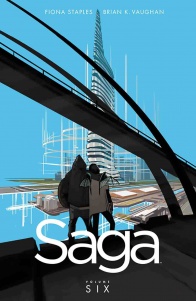 Written by Brian K. Vaughan
Illustrated by Fiona Staples
After a dramatic time jump, the three-time Eisner Award winner for Best Continuing Series continues to evolve, as Hazel begins the most exciting adventure of her life: kindergarten. Meanwhile, her starcrossed family learns hard lessons of their own. Collects SAGA #31-36

“Saga”, at this point, is just unstoppable. No, it hasn’t been made into a movie or TV show but it’s a consistent award winner and New York Times bestseller. It’s one of the most respected ongoing series and frequently recommended to new comic book readers. This week, the sixth trade paperback is out and while this isn’t my favorite arc of the series so far, it still carries the emotional weight the series is known for. It’s not the best place to jump into the series but it’s a strong set of issues that proves this series is not losing steam.

“Saga” Volume 6 begins with a time jump. By this point, this is what we’ve come to expect from the series so the curiosity is always how far we go each time. At the beginning of this arc, we get to see Hazel in kindergarten. We’re quickly caught up on where she is and what her life is like now as basically a prisoner of war. Elsewhere, Marko and Alana have reconnected as a couple as they search for Hazel. After being separated from her and almost completely destroying their relationship, they’ve grown closer. Their only goal in life right now is reuniting with Hazel and to do this they’re willing to rejoin forces with Prince Robot (now going by Sir Robot). Elsewhere, Doff and Upshur are given a second chance at their big story.

As strange as this may sound, “Saga” Volume 6 is so strong because it doesn’t act like an attempt to catch people up. It’s the progression of long form storytelling with a creative team that’s become incredibly effortless in their collaboration. Each arc of “Saga” has felt like snapshots of something bigger and that’s what’s really made each volume stand out from each other despite being a fully connected story. Staples doesn’t radically change her character designs but as the story as gone on, you can see the wear and tear and the evolution of these characters. With this arc, Alana and Marko take on an almost hipster parent look and Prince Robot is a shell of his former regal self. There’s an almost Orange Is The New Black vibe with Klara and her fellow inmates with Hazel’s teacher visibly looking like this ray of sunshine in all the darkness.

Staples continues to play with scope in a really mesmerizing way. There are a lot of writers who don’t like to use splash pages but with Staples being so core to the storytelling, the ones that we get here are truly epic in scope and add something to the story. As a writer, Vaughan really steps back and lets Staples do a lot of the heavy lifting. Through expressive characters and excellent scenery, Staples becomes one of the best storytelling artists in the business. She does so much more than simply translate a script.

This arc takes on a darker tone but through some of the more “slice of life” moments, like Hazel showing off her very silly drawing and Doff and Upshur being adorable with each other. It’s these little moments that kind of bring everything back to this being a very human story. “Saga” is described as a sci fi epic by a lot of people but it’s at times a dark comedy and at other times it’s a soap opera. This is extremely apparent in this arc of the series thanks to how much has been building up. Vaughan infuses a necessary sense of humor into the script without sacrificing some of the heavier emotional beats.

As Hazel grows up, her voice becomes more unique. Vaughan writes her with a blunt sense of innocence in this volume and while it’s very on the nose, it works to give her something to do instead of being a bystander. She’s a child and because of this she has the ability to kind of just say what everyone wants to say but doesn’t know that she probably shouldn’t. I’m not crazy about how aware she is because even in this environment, it feels too emotionally complex. Although, to be fair, my experience with kids isn’t that vast so I could be off base here.

“Saga” Volume 6 is not the most exciting arc of the series but it’s pivotal and it builds off of important events that have before it. There are some genuinely humorous moments and Staples art is as usual, off the charts gorgeous.

Final Verdict: 8.5 – Six volumes in and “Saga” continues to be stellar.