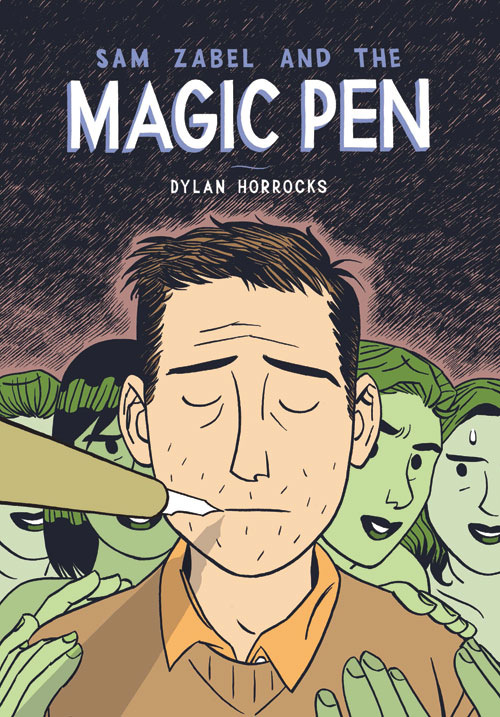 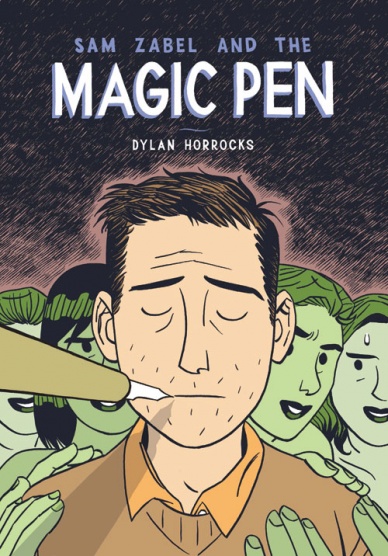 “Sam Zabel is a cartoonist. Or so he says. Truth be told, Sam hasn’t drawn a comic in years. Every few days, Sam sits before a sheet of blank white paper, pencil posed in shaking hand… Sam remembers when all this was easy. When words and pictures tumbled onto the page – clumsy but playful, untroubled and free. He sits at the computer all day long… paying the rent… doing his bit… keeping the wolf from the door…”

So begins “Sam Zabel and the Magic Pen”, the latest book from cartoonist Dylan Horrocks. A sharply illustrated and somewhat passive aggressive satire, Horrocks’ latest is both a re-assertion of his long missed talent and the ultimate comic book story — one in which the thing that brings us all to comics is put at the forefront.

Sam Zabel is our eponymous character, a former indie cartoonist currently working for a major publisher as he writes the continued adventures of Lady Night, a modern iteration of a classic superheroine whom he no longer cares for as she drifts further and further from the character she once was. Horrocks is making no attempt to be subtle here, of course. As the former writer of Cassandra Cain aka Batgirl, it’s pretty easy to see where Horrocks’ ennui stems from and who Zabel is supposed to be; that characters in the story keep telling him they liked his work on “Pickle” more certainly removes any claims to subtelty this book could’ve had. What kicks things into gear, though, is that Sam Zabel discovers that there is a passageway created between our reality and the world of comics, one that can be explored deeper and deeper like something out of Inception, and it all stems from the use of a magic pen.

Right off the bat it’s easy to see that “Sam Zabel” is not exactly understated in its intent. However, that doesn’t make it any less profound. “Sam Zabel” feels like the dictionary definition of a labor of love; something with a subject matter that at times it seems Horrocks is almost timid to delve into, while at others there’s no fear as he dives deep with biting criticism and satire. Zabel as a character seems to straddle two sides of the cartoonist debate, at times leaving heavy towards meta-commentary with a lack of fourth wall and at others existing wrapped in naiveté, but both he and the magic pen serve rather obvious functions within the story. Horrocks seem to hate what comics have turned into, how repressive they’ve become and how that reflects back on him/his work, and yet he also takes careful consideration to not be overbearing with this message; it’s always there, no matter what, but sometimes it’s more like a devil in the shoulder to the reader.

One thing that strikes me as pertinent towards Horrocks’ work is how much it holds up as years pass. “Hicksville” and “Sam Zabel” share many similarities, particular in its worship of the divine potential of sequential art, but we view “Hicksville” through a different lense of experience. When “Hicksville” was originally published it seemed more like an ode to staying true to your comic creator roots, to not be fooled into the allure of superhero publishing and not use that as a vehicle for stardom as you lose your integrity in favor of characters who punch each other in exciting and gritty ways. When it was republished about ten years later, it seemed almost exactly like a biography of Mark Millar, in regards to both Millar’s influence on comics and what brought Millar attention in the first place. Not only that, but Horrocks (who had flirted with a Gaiman-based Vertigo property himself) had ended up working for DC for a time as well, making the book even more interesting as a letter from his younger self to his future self. Horrocks’ foresight is incredible but it is hindsight (or perhaps lack thereof?) that adds whole new layers to his stories. “Sam Zabel” then seems like a spiritual successor to “Hicksville,” and I can only imagine how revisiting “Sam Zabel” ten years from now will look.

Despite the balancing act, though, there’s one thing that Horrocks never loses site of, and that’s that he absolutely loves the unbridled potential of the medium. If this book is supposed to pass as something emblematic of his opinions (and, given that Zabel is basically a stand-in for Horrocks, I think we can assume this is true), then it’s easy to see into Horrocks’ mind and understand where the criticism comes from: a deep, earnest place of love, and of wanting to see comics be better.

What’s impressive about “Sam Zabel” is how Horrocks balances the escapist fantasy elements. Comic books represent acts of escapism first and foremost, and are often typically described as a medium for guys where muscled adonises assert their dominance in tried and true fashion; times have changed, things in supehero comics have certainly evolved, but that stigma still hangs predominantly over us all as a fantasy both in terms of the power and physique of men and also the role that women in comics often play as objects for them. Therefore, the idea of a magical pen where authors can literally create their ultimate fantasy and then jump into it brings this aspect of comics to the forefront in a profound way, especially given that pretty much all of these fantasies are sexual in nature. Sam as a character is not inherently immune to it, treated to temptation and wild dream sequences, but Horrocks keeps the book self-aware not only by giving Sam a conscious usually unseen in male characters, but also by creating alongside Sam a female cartoonist who shares his imaginations, his passions and takes literally none of his shit, acting as a younger foil. “Sam Zabel” as a book is wildly self-aware and certainly Horrocks plays up that aspect for his and our amusement (the age discrepnacy between Sam and Alice Brown is very noticeable particularly when it comes to cultural reference points, suggesting certain commentary between Sam and Alice’s generations), but Horrocks never allows the book to go off the rails into anything otherwise lewd or unwelcoming. 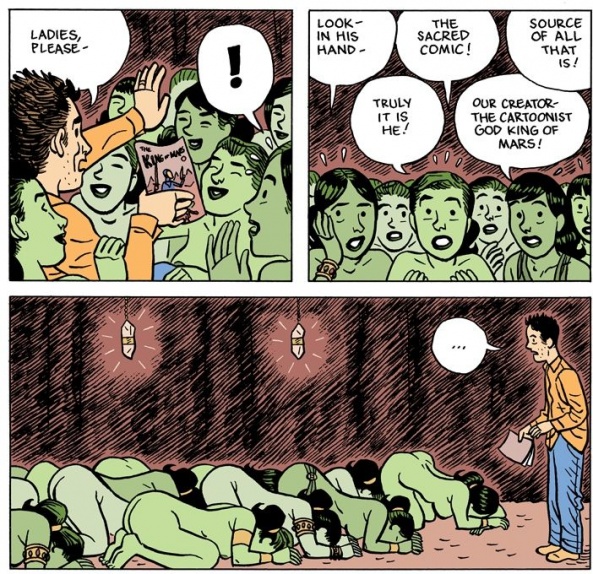 And it should be noted, sex and sexual fantasy is a huge part of the book. If the book is about escapism then this is the one thing that is inescapable. The book deals with sex and our relation to it in every chapter, in every genre, in every way possible, from the revealing and appealing outfits of superheroines or even to a time built more around sexual repression. Given Horrocks’ style there is perhaps more male gaze afforded than female gaze, but you can see where and how Horrocks attempts to include it (even if it’s not always as effective as I’m sure he’d like). But Horrocks plays with this, with misconceptions and ridiculously antiquated notions of cultural roles and gender dominance, and despite the importance of sex to the story it’s never inherently pornographic (and I’m including an orgy-based sequence in that summary). Horrocks plays with angles and moments and specific interactions of sex that literally spans eras of sexual knowledge, and in all but one sequence (in which it’s obviously geared to be different and perhaps more titilating) the emphasis is towards honest interactions between people — and that ends up being the greatest strength of the book.

Because you see, where Horrocks inevitably excels is with his characters. While as a fan of his work I can see that there’s a lot of interesting artistic progression between something like this and “Hicksville,” the most obvious improvement is in the way Horrocks draws people. I don’t mean that just in a stylistic way, either; while Horrocks certainly has a recognizable cartoonist style to him, it’s more about the little ways that he makes his cast excel: the smallest of facial ticks and foibles, the gestures towards one another, the way they stand alert and the way they relax. A contemporary comparison would perhaps be Craig Thompson; in the same ways that we can see a very emotional evolution between “Blankets” and “Habibi,” “Hicksville” and “Sam Zabel” represent a similar form of artistic growth as Horrocks puts more of an emphasis on who the people in his story are and what specifically they represent — both in relation to the stories/genres they’re pulled from and how they interact with himself as an author alongside his rather obvious avatar found in the narrative.

Never the less, Horrocks proves that with talent like his it’s often worth the wait, as his craft and care towards his work is astonishing here. As a writer Horrocks is certainly well-accomplished, but what “Sam Zabel” affords him is the opportunity to truly play around with the medium and push himself as an artist. The book is not a slave to any one style or genre; it’s a bit memoir-ish in terms of some storytelling tropes and character affectations, but it’s also an epic fantasy — perhaps, all things considered, the ultimate one. As a stand-in for Horrocks, Sam Zabel finds himself flirting in and out of classic story archetypes, from lush, foreign jungles to barren Mars wastelands, from a pirate ship sailing the high seas to a classic manga-styled high school. Horrocks has had more than a decade to perfect his craft, to experiment with styles both classical (there’s a sequence of Horrocks imitating classic artists) and modern, and it all comes together quite evenly. 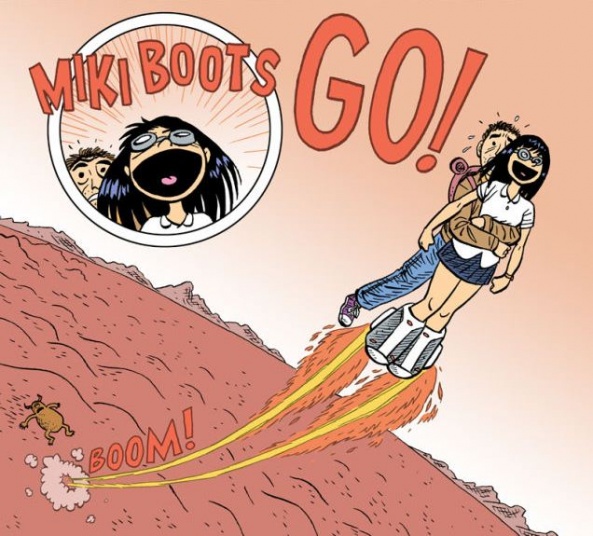 And in the end, we have to come back to one simple point: “Sam Zabel and the Magic Pen” is more about the wonder of comics as a medium than it is anything else. It’s clear that Horrocks idealizes comics, for better or for worse, and there’s certainly something interesting in his fascination with a very specific, very creator-driven iteration of comics. Horrocks is a talented and established creator, and “Sam Zabel” represents a jaunt through just about every iteration of popular comics we’ve seen — and yet I do wonder if Horrocks learned anything himself while working on the comic, in the same way it’s fairly clear that Sam Zabel ostensibly doesn’t, as Zabel’s opinions are not inherently different at the end than they are the beginning. Zabel does find a different way to grow up, but it’s almost a fairly atypical approach to the narrative arc, and I’d imagine that echoes Horrocks.

Before sitting down to read this, I felt like it had been forever since I’d read a new comic by Dylan Horrocks. This statement is only somewhat true; “Hicksville” came out in 1998 (or 2010 if you have the Drawn and Quarterly reprint, as I do), and since then a lot of what Horrocks has done has been online, some of which I’ve encountered but not all. However, having a book like this again reminds me as to why Horrocks is one of the most important cartoonists currently working in comics: his work is honest and often painful, permeating with a sense of heart and warmth and love for the medium that isn’t always so visible in the work of his contemporaries — and that’s even when he’s berating everything that comics currently are. “Sam Zabel and the Magic Pen” is a book that essentially wants comics to be better but acknowledges their shortcomings all the same, and just as “Hicksville” seemed like a warning for idealists, “Sam Zabel” almost seems like a blueprint as to how we can take the stereotypical escapism overdone in the comics and turn them once again into something of true, earnest value once again.