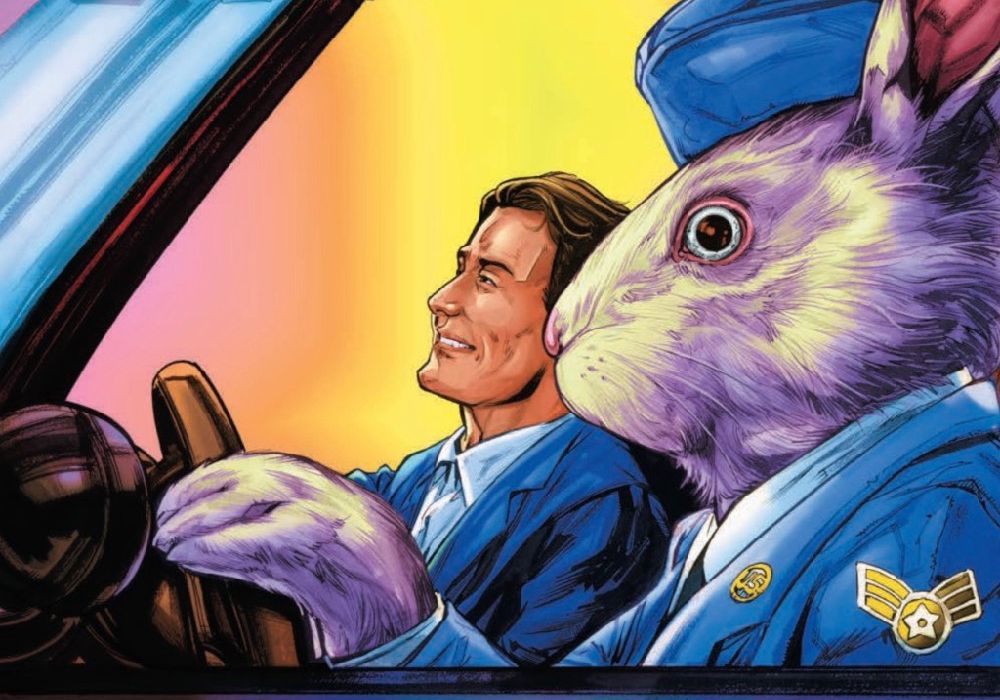 What’s the comic book equivalent of that lull in the action where you can safely get up and go to the bathroom or get your popcorn refilled? Read on, without any fear of spoilers ahead! 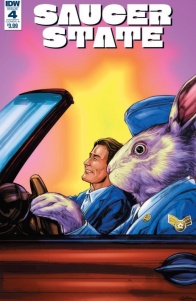 How do you use cake to summon something in the desert? Should you? Space Warfare Task Group reports back, and now Arcadia might have a gun in time. There’s a grave for someone who’s meant to be heading back to Earth. No more damned data. The Russians say something terrible. And Fausto plays the trumpet. It’s the White House vs. ufology vs. incoming actual real damn aliens. With a flying bedstead.

If you judge a book by its cover, “Saucer State” #4 would seem to have a lot more in common with Donnie Darko than The X-Files (to which it’s been often compared). I mean, just look at that gorgeous image. A large, anthropomorphic rabbit in an air force uniform sits behind the wheel of a red convertible with a spectacular, multi-colored sky in the background.

Incredible. I’m totally hooked. I can’t wait to see where the story goes.

Unfortunately, that’s pretty much the high point. Aside from that one page scene, much of this issue’s action consists of important cabinet meetings briefly interrupted by important breaking news and even more important meetings.

After a visually interesting (but by now, standard) recap that features an array of somewhat voyeuristic photos and a heavily redacted document that appears to have been hastily blacked out with a Sharpie, Michael heads off to the desert to buy some “cake.” In theory, cake is a drug meant to help Michael summon or at least make contact with the omnipresent space aliens (rendered here as boilerplate “greys”) whose intentions toward humans are still largely unknown. (Hence the urgent need to make contact.)

In reality, however, “cake” is a plastic baggie of conspicuously shaped and colored translucent bright red pills whose very existence seems to blatantly borrow from another franchise’s core mythology. So, depending on your perspective, it’s either a clever homage or a lazy bit of cribbing that serves to infuse the story with meta-layers of meaning. Or maybe not…?

Anyway, after ingesting a red pill, Michael indeed experiences a vision, but it kind of freaks him out. Helpfully, the space alien that he’s summoned agrees to leave and come back later, when Michael is better translating the “hierarchies of information” and “convergence of forms” that signify a new physics. After that, as noted above, it’s pretty much one long, important meeting after another about how to avert impending disaster until the inevitable reveal/cliffhanger on the final few pages.

Fortunately, for the most part the book’s artwork is engaging and well executed in terms of both line work and color. Illustrator Ryan Kelly’s realistic style nicely sets up – and contrasts very well with – Michael’s hallucinatory visions. The night scenes are especially effective, with colorist Adam Guzowski giving everything a wonderful, dreamlike violet cast, punctuated by hazy white stars, that simultaneously roots the action here on planet earth and in the vast, mysterious cosmos.

In terms of visual pacing, however, this issue is stuck in a rut. There are far too many pages that essentially feature the same number of panels, in slightly different configurations, with very few layouts that invite the reader to linger and soak in the details. In fact, there are only two full-page panels in the entire issue, and one of those comes on the last page where it’s both predictable and expected. Other than these two exceptions, both visually and verbally, the story rises to its semi-urgent “everything seems to be equally important” dramatic level and pretty much stays there – as best exemplified by three separate panels that appear in relatively rapid succession that show Michael melodramatically pointing at something off stage.

“Hey, you guys see that? Follow it!” he exclaims, as if his theatrically extended index finger didn’t already make it crystal clear.

Ironically, or maybe it’s because of the fact, writer Paul Cornell tries to weave together three separate narrative strands that each center on a different character: Michael, as outlined above; President Arcadia Alvarado, who’s stuck in one meeting after another; and Astelle, who appears in what amounts to a brief, throwaway scene when she arrives at Brady Corporation to begin her astronaut training.

Juggling all of the book’s primary and secondary characters and their competing story lines is no easy task for its creators, to be sure, but in the end the narrative feels simultaneously hurried and monotonous somehow. Honestly, it’s a lot of work to track all of the details and conspiracy theories and political machinations and you have to ask yourself why.

Whose story is this? Who are we even supposed to root for? Oh, and by the way, there are aliens headed this way. Shouldn’t you maybe stop holding all of these meetings and go do something to save the planet?

Final Verdict: 5.2 “Saucer State” has been described and a mash-up of The X-Files and House of Cards, but this issue feels more like C-SPAN.