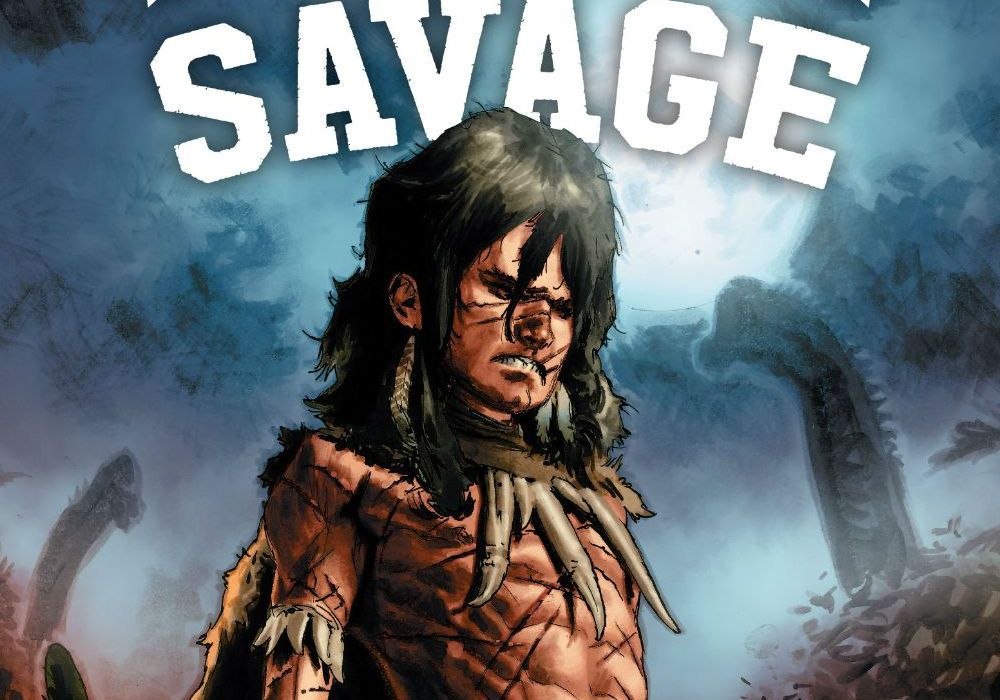 Perhaps the most offbeat book of Valiant’s 2016 line, writer B. Clay Moore and illustrators Lewis Larosa & Clayton Henry bring us a literal wild child of a protagonist and how he came to be. Let’s see how it works. 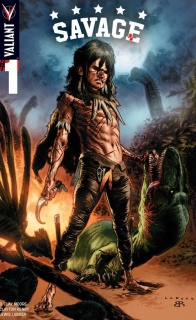 Fifteen years ago, the world’s most famous soccer star and his former supermodel wife –pregnant with their unborn child – disappeared without a trace. The world believes they are dead… But, in reality, their private jet crash-landed on a mysterious, unknown island ruled by by prehistoric creatures from another time…

This is the story of how they lost their humanity.

So, gonna be honest. This was the book that had me most concerned when I learned about it all the way back in May, when we were all a bit more innocent. Brexit hadn’t happened yet, my country hadn’t gone completely sideways (only mostly), “4001 A.D.” was just an exciting upcoming event. But even when I learned about this book, I had some doubts, mostly just because the idea of wild child devoid of human social norms could always bring up some unfortunate implications in the same vein that famous works like The Jungle Book and Tarzan had.

That being said, this issue is really interesting.

The issue begins with perhaps one of the strongest openings to a book Valiant has had. B. Clay Moore and Lewis Larosa (along with colorist Brian Reber) make a grand impact as we watch our protagonist on the prowl on the island. Capable of showing off keen skill as a hunter and sheer viciousness as he closes in on the kill. Moore makes a good choice in having no dialogue for this section, the exception being a feral yell as the boy attacks his prey. It allows Larosa’s heavily detailed work to tell everything to us. The dude has a clear passion for the drawing of dinosaurs and them getting viciously stabbed by a knife made from another dino’s talons. This is not a book for those that are squeamish when it comes to blood and gore, but it is beautiful in a grim way.

Now onto the boy himself, that Larosa designed. You know what really stood out for me? This is going to sound weird but: his teeth and nails. They’re jagged and sharp and cracked and just very ugly and I thought “Oh yeah. They wouldn’t be in good condition, would they?” They’re small details, but good ones. On top of that, they are capable of creating quite a sense of motion, something that did feel absent from Larosa’s last venture in “Bloodshot Reborn”. This boy has experience in hunting and killing and he knows it, showing off some quick tactics and even having some personality behind it with a feral smirk. Larosa and Reber are also more than capable of showing different sides to this boy. With his hunt complete and returning to his home, it’s full of small mementos, including a specific one that allows us to glimpse at the possible humanity within this poor kid.

But that is only about a fourth of the book. The majority of the issue takes place fifteen years ago, we follow the story of famous soccer player Kevin Sauvage (Aha! I, in fact, did see what they did there!), his manager wife Veronica, and their infant son, Kevin Jr. They are on a flight heading through a storm that will eventually have them crash on the island. And I have to say, Moore does a real good job of characterizing both of them. Kevin is an aging athlete with some problems with the Drink and Veronica may come off as somewhat cold, but it’s clear that they are generally decent people and do care for one another and their son.

Most of the time with them is about the immediate aftermath of their crash and art duty is taken over by Valiant vet Clayton Henry (Reber keeping on the colors). This contrast between Larosa and Henry is a great idea and the biggest reason may not seem so noticeable at first. Henry’s time at Valiant has made him more associated with the more “light-hearted” or “fun” books such as “Archer & Armstrong” and “Ivar, Timewalker”. His more expressive cartoonwork is such a natural fit for those kinds of books. Having him be the one depicting the beginning of this journey makes so much sense because these characters are only innocent humans for now. That will not last, as shown by the issue’s end when the violence and the blood begins.

Brian Reber is probably my favorite colorist working with Valiant and he gets to show off a bit in terms of tone. Sure, the scenes with the Sauvage family aren’t “happy” but it is nowhere near as grim as how the book begins. Reber’s colors manage to drift between more vibrant scenes to the sheer malicious. All the while, they feel incredibly consistent, without ever feeling like there is a filter over them like I always get with colorists like Dalhouse.

“Savage” was a book that could have gone very wrong very quick. And while it may not be out of the woods yet, keeping the cast minimalistic did it a great service in that light. It allowed Moore, Larosa, Henry and Reber to really get us to know these characters, whether through dialogue or through some really excellent and subtle artwork that isn’t afraid to push some boundaries Valiant really has shied away from since their return.