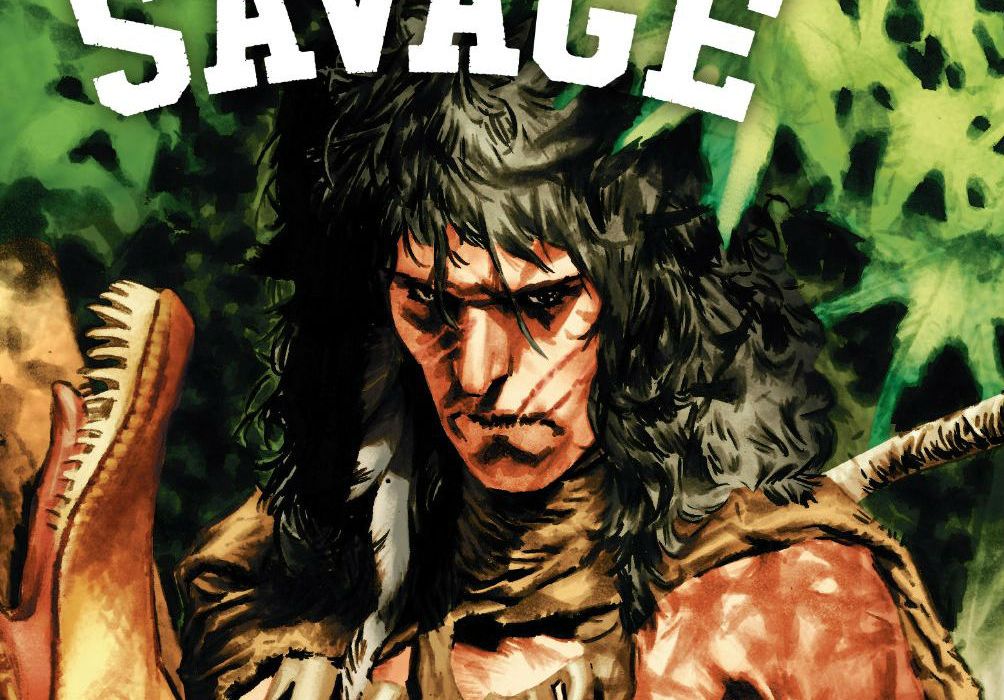 The pre-historic tale of humanity continues as the veil around young Kevin’s origins continues to be pulled away. How does it go? Let’s look. 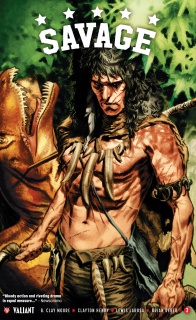 Learning to claw! On a mysterious island seemingly untouched by time, order is about to give way to instinct. Stranded with no hope of rescue, the Sauvage family must sacrifice the people they once were?and embrace the animals within! But as prehistoric monsters stalk them at every turn, will their newfound bestialness be enough to ensure survival, or will they be forever trapped at the bottom of the food chain? And when tragedy befalls the once close-knit family, will their last tether to humanity be severed once and for all? Valiant’s latest prestige-format epic slashes its way forward as acclaimed writer B. Clay Moore and luminary artists Clayton Henry (HARBINGER WARS) and Lewis LaRosa (BLOODSHOT REBORN) continue the hard-hitting origin to Valiant’s next great hero and begin his greatest trial yet!

When last we talked of “Savage”, I talked about how it was the strongest debut Valiant had all year and I still hold to that belief. This is the tragic tale of a boy that deserved none of the bad things that are happening in his life, growing up in such a harsh and humanity-breaking environment. It is also a tale of love and protecting and honoring the things we love. That while it examines those base instincts and regression of humanity, it’s twinged with the hope that we can overcome that.

Now, we are 75% into this story and I must say, it does feel like it’s taking it’s sweet time. Not so much “decompressed” (like, I don’t feel like I’m reading a Bendis comic where he manages to stretch an issue of plot to a full trade paperback) so much as just when the present story starts to get some speed, we’re yanked back into the past. Don’t get me wrong, both sides of this tale are very necessary and very intriguing, but it has had a negative effect on me. It makes for a book that simultaneously feels like a brisk read while also going at a snail’s pace.

That said, we now have a much firmer grasp on the backstory, as we learn that the Sauvage family were never alone on this island. Aside from the rampaging dinosaurs, there has been a group of people that have been stranded here as well. This issue also introduces some implications within that this place may have some connection to the Far Faraway, a sorta world outside of time that was introduced way back in Fred Van Lente’s “Archer & Armstrong” run. The mysticism is kept low-key, very Lost-esque without… you know… being bad. The encounter with this tribe also brings about our young Kevin’s last remaining innocent days before he receives a devastating emotional blow. This is the moment of transformation. This is where Kevin Sauvage Jr. becomes Savage.

Which ties the story back to the present. This is the more swift, primal, angry side to the story. The more and more we learn of the past, the more and more we get the anger Kevin has for these other humans on the island. As always, the present segments are less dialogue-heavy, but we finally do get some bits from present-day Kevin and while there is some of the wild pride he silently showed in issue #1, there is a lot more anger within him now as he confronts one of the other islanders that helped ruin his life.

But the art is where this story really has been excelling. Lewis Larosa and Brian Reber’s art is purely amazing in it’s grim tone. We get a step by step view of Kevin “saving” on of the tribesmen from a pack of raptors and seeing that precise brutality on display is a sight to behold. Every line of detail further emphasizes the brutality of this world without ever becoming overly detailed. It’s photorealism without ever sacrificing fluidity and grace that this character possesses. Speaking of realistic, I’ll give a word of caution to the squeamish: organs are on display here in vicious and vivid detailing. Beautifully drawn, but gross.

Clayton Henry and colorist Andrew Dalhouse continue work on the past portions of the issue also to great success. They implement a more traditional “house” style, but in very smooth linework and more cartoonish features. It works to the book’s advantage that they are the ones who take care of the subtle mystical aspects of this series, which wouldn’t work with Larosa/Reber’s style. While their style is cleaner, they aren’t afraid to scrimp on the violence either. The violence isn’t as gory as in the present, but they make a great use of contrasting color to emphasize emotional impact of the violence as opposed to the physical detail.

“Savage” is a book that has taken its time to build up to this moment. It definitely has the feeling of decompression (even for a four issue mini-series) but it has been a fantastic look into the dark heart of man stripped of the hypocrisies of civilization while also being able to have time for bits of heart and hope. The artwork does an amazing job of selling these themes, guided along by a very well crafted script that knows when to let that art do its job. If it can stick the landing, “Savage” may end up being a massive critical success for Valiant in the same way “Britannia” was last year.

Final Verdict: 8.3- While it feels slow at times, “Savage” is still one of the more interesting mini-series on the market.