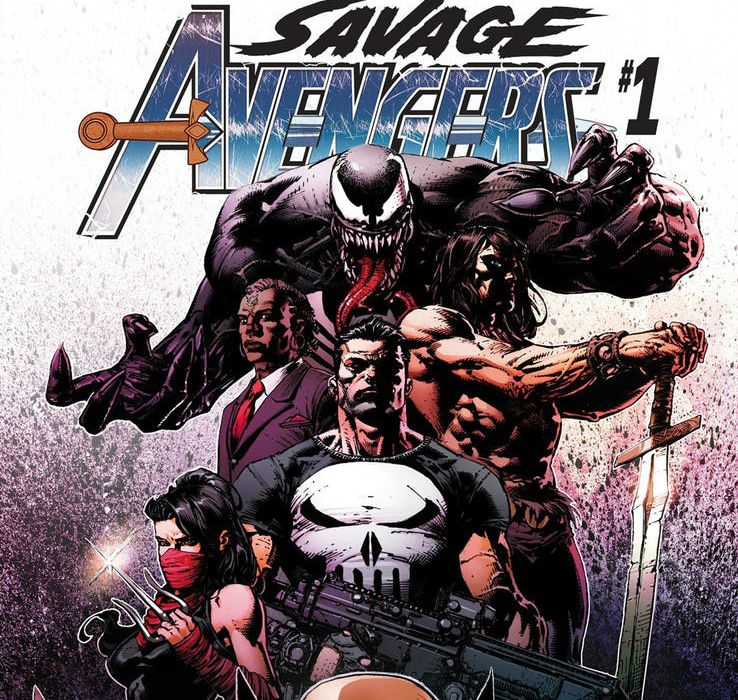 There’s a lot of sniffing in this comic. You gotta figure that any book with Wolverine is gonna have someone following their nose, but it turns out he’s not the only one. No less than three heroes use their olfactory abilities to save the day. When I try to remember what happened in this debut issue my first thought immediately goes to sniffing. Is that all that happened though? No, not exactly. Let’s talk “Savage Avengers.” 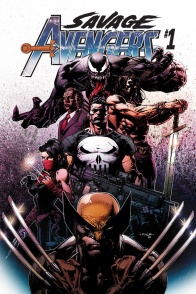 The most savage, most unkillable team of characters in the Marvel Universe is assembled! Wolverine! Venom! Elektra! Punisher! And in their midst – Conan the Barbarian! Conan has returned to the Marvel Universe and his new adventures begin here. What is the City of Sickles? Who is the Marrow God? How is the Hand involved? The roughest and most dangerous characters rumble through this new title starting with…Conan vs. Wolverine? ‘Nuff said.

Ah, “Savage Avengers.” What happens when you team up all of Marvel’s murderers plus add in everyone’s favorite Hyborean Barbarian this side of Cimmeria? You get “Savage Avengers.” And this is a weird one folks. Ostensibly spinning out of the pages of “Avengers: No Road Home,” the Barbarian who will be king is spending some time in Marvel’s Savage Land, doing exactly what he would be doing in his own time.

Let’s start with what most of this issue is about: (besides all the sniffing I mean) fights. About half the page count of this comic is devoted to fight scenes. Those fights mainly happen with minimal dialogue. Sometimes pages go by without so much as a quip, all poses, mutilations, and big sound effects. There are different camps about art heavy, dialogue-lite issues. Some people feel that the comic is less valuable- after all you’re paying an exorbitant Marvel price for what feels like half a book. On the other hand, some people really dig action heavy books, which largely use the artwork to tell the story.

Some comics can really pull off the silent (or restrained) issue thing. The incomparable Chris Samnee made it a signature. David Aja’s heavily stylized work has led to multiple issues that feature far more images than words. Mike Deodato Jr. is no amateur. He’s an artist who’s drawn hundreds (if not thousands) of comic issues. His workmanlike style is far better than some of his other prolific Marvel peers, but his work is usually simple and representational. His figures are exaggerated in terms of anatomy and costume, but they look like the sorts of people they are trying to portray. I’m not gonna say that the endless fighting in this issue is boring but… it is very conventional.

That doesn’t tank Deodato’s contribution entirely. It just makes him a poor match for the ambition of the script. When it comes to a dramatic full page character entrance, Deodato nails the lighting, the positioning, the splashiness that those moments require. When Wolverine and Conan the Barbarian are trading blows- and let’s just take a moment to acknowledge that there is something inherently awesome about that sentence. But when those two guys are fighting, the action scene is well choreographed, taking you from cool moment, to cool set-piece, to cool location. If Deodato designed an action scene in the MCU, it would be loads better than the movie is what I am saying.

But there is a page of Wolverine and Conan falling off a cliff, slashing at each other on the way down (again, awesome). If I take the time to deeply scrutinize each image, they’re actually pretty cool. Wolverine tries to use his claws to cling to the cliff, Conan drags him off, the low sun gives everything a pleasant melodramatic light thanks to Frank Martin’s colors. But on my first readthrough, nothing about the scene made me want to slow down. It’s a fast scene. When two characters fall off a cliff in a superhero book, you want to turn the page to see what happens at the bottom. You don’t want to linger on six panels of the fall.

The non-silent parts of the book are pretty awesome. Gerry Duggan does good dialogue, and Conan and Wolverine are not loquacious, making their rapport all the more impressive. (“Wizards should be put to the sword!” “You got a lotta great ideas, bub.”) Doctor Voodoo is barely in the issue, but I can’t wait to see more of him. And the bad guys are actually great. Evil wizards in a Conan story are utterly predictable, so you’ve got to infuse them with style and Duggan delivers. The mechanics of the dark summoning ritual are easy to understand, really messed up, and totally metal. Those are all good things as far as I am concerned. The evil entity they are trying to summon is called Jhoatun Lau, and seems to be some kind of Cthuloid Frost Giant who drinks bone marrow, and if you are gonna call your book “Savage Avengers” you’d best have a demonic Thor villain reject who feasts on the more obscure human bodily fluids. That’s just math.

But man there is a lot of sniffing. I guess that’s what makes the book truly savage? In the end, I had a fun time with “Savage Avengers.” Each creative team member brought something different to the table, and your Conan-meets-the-murder-Avengers expectations are totally fulfilled. Am I excited to read issue 2? Sure, this seems like it’s gonna be a good time for 8-12 issues and get unceremoniously canceled. Would I pay five dollars an issue for this series? Absolutely not, that’s the true savagery.