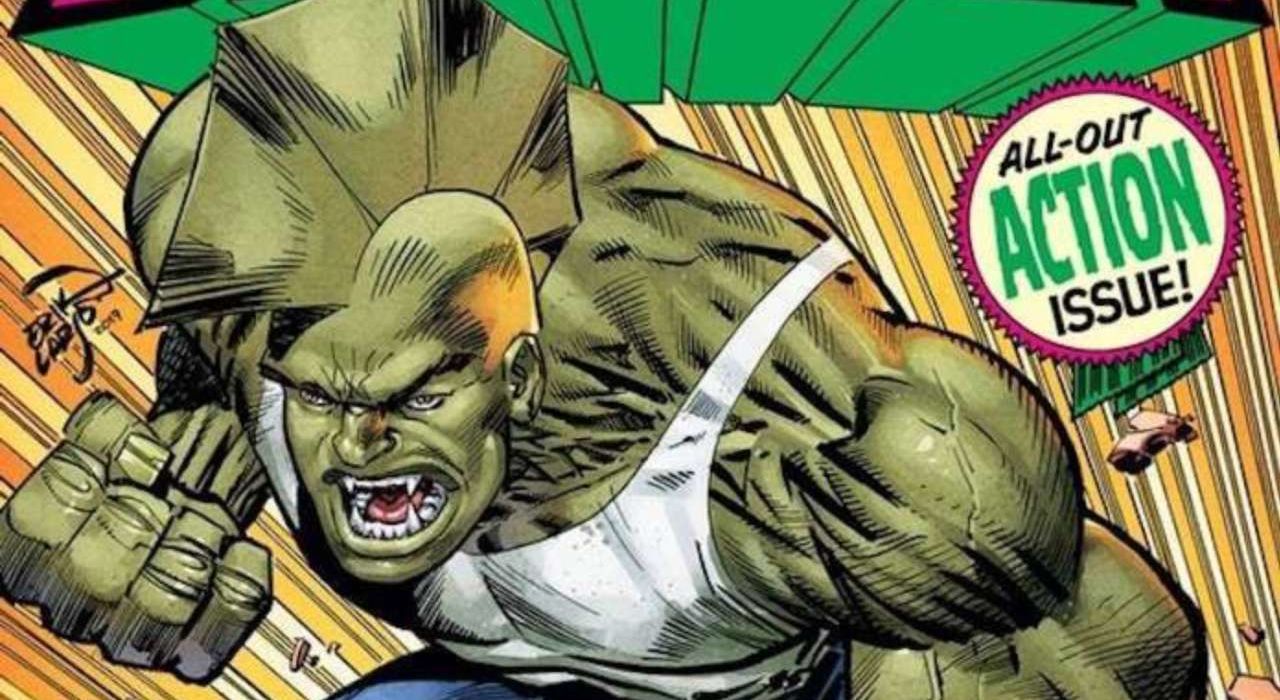 It’s nothing short of astonishing that Erik Larsen is still writing and drawing “Savage Dragon” 28 years in. This is a book that I don’t keep up with all the time, popping in and our every few years when a big milestone hits. Well, here we are with issue #250, and so what better time to catch up with the series? Be warned, spoilers for the issue follow, as well as some not safe for work talk about sex in the title. 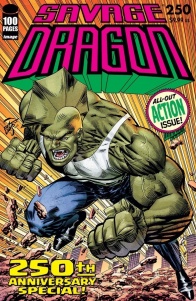 ERIK LARSEN’S SAVAGE DRAGON HITS ISSUE 250!For 28 years, ERIK LARSEN has chronicled the lives and times of the Dragon and his extended family in one of comics’ only series set in real time. This monumental oversized milestone issue is a sweeping culmination that sets the stage for the next phase of comics’ most uncompromising series with its most shocking story yet! Forces have conspired against Malcolm Dragon and his family—but is this a turning point or…THE END?! Find out as SAVAGE DRAGON becomes the second original Image title to reach its 250th issue and begins the countdown to #300!

There are two important caveats/pieces of information that are essential to get out of the way before getting into the review itself. The first is that, unlike most comics, “Savage Dragon” moves in real time, so the characters in the series are aging along with the reader. Due to that, there is a lot of backstory that I’m vaguely aware of, but likely have missed in my inconsistent reading. This makes “Savage Dragon” a really unique comic, because it is both taking place in 2020 and in a timeline that hasn’t stopped, so it can be of the moment in ways a lot of other comics can’t (like, for instance, taking place during the COVID-19 pandemic).

The other is that this book has no allegiance to anyone but Erik Larsen. This isn’t a corporate owned comic, or something where there’s an assigned editor helping keep Larsen on task. When he does anything, he’s doing it because it is his vision for the book. It is extremely rare to see a creator have that level of autonomy on a book that goes on as long as “Savage Dragon,” and should be celebrated for just how singular the vision is.

That said, the vision is problematic at times. Larsen doesn’t miss an opportunity to draw a nipple, whether it be on a robot or on Maxine, the wife of (current book lead) Malcolm. Maxine is clearly not supposed to be 15 years old, but no one seemed to tell Larsen’s pencil that, as her petite, braced-mouth look evokes a teen, or even pre-teen look. Larsen doesn’t just draw her naked a lot, he makes sure when she leans over, you see her breast, or inserts an upskirt shot for no real reason. It’s shocking that I forgot how much sex is in this comic (especially since issue #222), and even though this issue is likely more full of sex than the average, it has always been a part of the book.

But I don’t know if Larsen has always drawn his female characters this objectified and on display. Maxine has been sex-crazed for a long time, but this issue takes it to some places. I mean, and I’m warning you, this is about to get really graphic, he depicts Maxine literally dripping from her nether regions in anticipation of sex with Malcolm. This isn’t supposed to be sex shaming or knocking the dude’s artistic impulses, but it seems gross, especially in 2020, to have stuff like that in a comic when it really doesn’t add to the story at all.

There is sex in this issue that works on a much better level, and there’s even a fun joke with their robot maid hearing a battle and mistaking it for sex, but it just seems overkill, especially when considering the age of Larsen and how young Maxine appears, visually. If it were just Maxine, it could be argued that the sexualization is appropriate as Malcolm’s partner. But literally every adult female character is shown with either see-through nipples, a costume that reveals a lot of ass, or, in one case, someone shooting webbing from down below.

Because the issue is about life in quarantine, the joke is that Malcolm and Maxine are having a lot of sex, and that’s a fine plot point, but it takes up the majority of the issue without really adding too much to the story. Because it’s both an anniversary and quarantine issue, there is also a lot of check-ins with supporting characters from the past but, again, none of their conversations are particularly interesting or move the plot forward at all. In fact, the only thing that really brings the plot anywhere is the final page of the book. Again spoilers follow, so if you don’t want to find out the big cliffhanger, do not read the next paragraph.

The ‘presumed dead but not really since issue #225’ original Dragon has returned, and is visiting Malcolm. Now, this series has played with alternate timelines and resurrections before, so this isn’t all that shocking. But because it is a series that runs in real time, it also seems like the type of stunt that wouldn’t really go over at his point in its history. It is exciting to have Malcolm as the lead, and seems a bit reductive to play with that at this point, 57 issues into this status quo.

Beyond the main story, there are lots of shorts by a variety of artists featuring other Larsen creations, as well as a reprint of one of Larsen’s oldest “Paul Dragon” stories. It is through that reprint that I realized how much Larsen’s art style has changed. That reprint looked far more indebted to his influences, specifically Jack Kirby, than his more recent work does. I prefer that older approach from an aesthetic point of view, but I respect that Larsen has continued to push himself and change what it is he does.

And that’s why this is such a tough issue to review. I truly believe that artists have the right to make as close to their art as possible, without filter or censorship. If this is how Larsen wants to tell his stories, then they may not be for me, but that’s totally within his rights to make it, and mine not to read it. But the question of ‘why’ must be asked as well. Why is this the best way to tell this story? If the answer isn’t crystal clear, then maybe it’s best to approach it differently.

Final Verdict: 5.5 – A disappointing issue from a storytelling place, and a disturbing one visually.