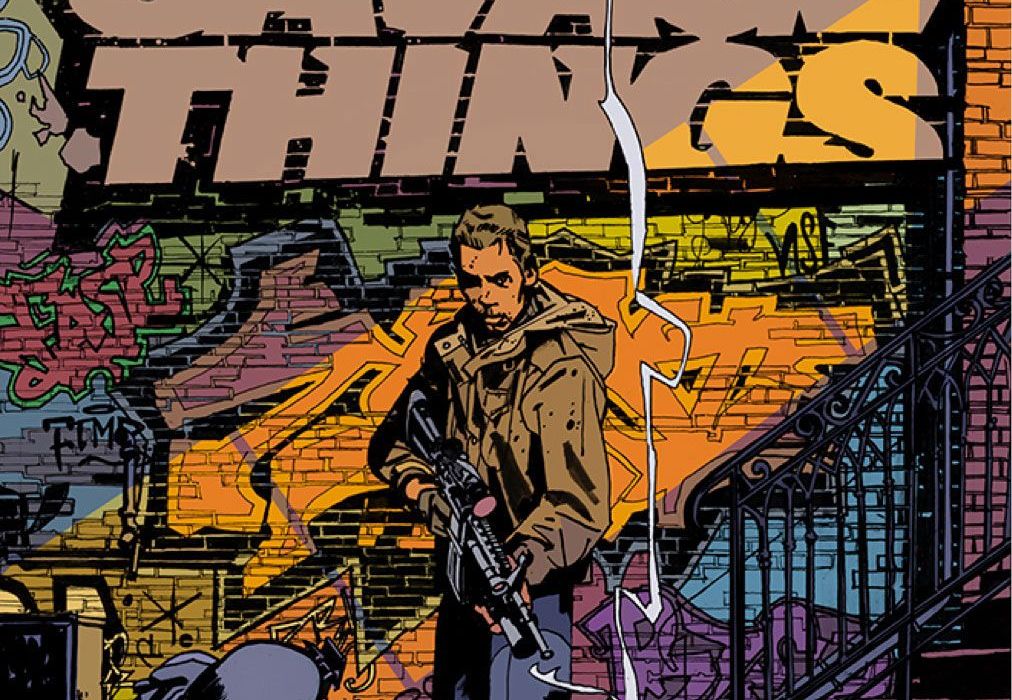 Justin Jordan and Ibrahim Moustafa fire off the bloody opening salvo to their new Vertigo mini this week. So, just how savage are these things going to get? Read on to find out if they’re shooting blanks or firing live rounds. 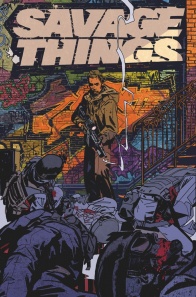 Twenty-five years ago, a secret government organization kidnapped children and trained them to be chaos agents who went on to foment unrest and execute enemies of the state around the world. When these cold and unfeeling creations proved too difficult to control, the powers that be exterminated their kill squad with extreme prejudice.
Too bad it didn’t work.

Now a rogue band of the worst monsters the world has ever known is cutting a swath of terror across the United States, threatening not just a disruption of the peace but to expose secrets their handlers never wanted to come to light. The only way to stop them is to call back the only man who ever walked away from them. His code name is Abel, and he’s not afraid of getting his hands bloody.

This new eight-issue miniseries from writer Justin Jordan (The Legacy of Luther Strode) and artist Ibrahim Moustafa (High Crimes) features the action of the Jason Bourne movies with the gruesome horror of classic grindhouse!

If Stranger Things was a throwback to those ‘80s sci-fi adventures involving kids but were never really meant for them, then “Savage Things” might just be a throwback to those ‘80s straight-to-VHS bullet-fests that were most definitely not for kids. Billed as a mashup of modern spy games and grindhouse gore, this issue spends a little too much time pulling action figures out of their boxes to really deliver the grand guignol. But Jordan meshes straight-arrow storytelling with Moustafa’s sleek artistry to ensure we know where everyone stands before things get bloody.

In fact, there’s really only one hint at the savagery to come. Moustafa splashes red across his panels sparingly, and only devotes a single page to the butchery within a New York hotel that acts as the inciting incident to the series. Even then, perspective is pulled back to a distance and panels are oriented to only catch glimpses of what happened. It’s the expression on the hotel staff’s faces as they encounter the gruesome scenes that truly captures the horrific nature of the crime.

Stories of unhinged, government-sponsored kill squads who’ve shaken off their leashes are about as common as ones involving shadowy organizations dehumanizing children to create unblinking weapons of state. Jordan and Moustafa aren’t really doing anything particularly groundbreaking by combining the two. But a comic like this is closer to a new take on an old jazz standard anyway. It’s not about the notes it hits, but how it hits them. And what will really set this book apart is the execution.

If this series’ hook is tying a slasher-flick aesthetic to black ops espionage, then that’s a novel enough approach. But it’s not really on full display yet. For now, Jordan takes his time to loosely sketch the backstory of the Black Forest unit through the eyes of one child, Abel. What sits rather uneasy with this premise is the conceit that Black Forest was created as a way to make useful those children the government had somehow pegged as potential mass murderers from an early age. There’s some heavy moral unpacking required when thinking too hard about this concept. And since Moustafa draws the kids with vacant expressions, him and Jordan really force you to reflect on those implications. In the most unsettling instance, one of the government handlers announces an upcoming test to an audience of hollow eyes, “There are forty of you in here now. This door doesn’t open again until there are twenty.” It’s really hard to tell whether to feel sorry for these children or feel chilled to the bone by them. This is about as morally grey as grey can get.

There’s a cold and distant quality to the color palette used throughout. Panels are extremely desaturated and there’s a distinct lack of vibrancy to most facet of the book. It keeps time with the unfeeling, sociopath visages on the Black Forest kids, but also implies an underlying lack of humanity from all involved. There’s something just as fundamental missing from the government agents – kidnapping and parental murder notwithstanding – who would treat troubled kids as nothing more than blunt instruments to be sharpened into knives. Even the name itself, Black Forest, is unnerving, suggesting things that most likely dead inside already.

But for all that dour outlook, the issue moves at a brisk pace, with Jordan feathering plot development and past reveals at an efficient clip that feels neither expository nor too enigmatic. And for as detached and emotionless as his artwork is during those flashbacks, Moustafa swings the pendulum violently back the other way for the manhunt of a now-grown-up Abel that closes the issue. Panel perspective ricochets back and forth between the human target and the operatives tailing him with such a regular cadence that, even though we know it’s going to happen, it still comes as a surprise when Abel jumps out from a shadow to ambush one. Jordan writes Abel’s reaction as ruthless efficiency, which finally allows Moustafa a chance to cut loose in violent revelry. And for a brief moment, as Abel fires an assault rifle up through floorboards from the basement he’s hiding in – cutting down a half-dozen agents in the process – he bares his teeth in a ferocious grimace. It’s the first we see him with any emotion cutting through that vacant exterior.

And he’s supposed to be our hero, for lack of a better word. It’s one hell of an intro. But unfortunately, it feels like a match blowing out just as it’s lighting a fuse. Overall, it’s tough to shake the impression that this issue is all backstory and introduction. It’s artfully done, no doubt, but it’s tough to sense how the overall story will take shape moving forward. Remember, what really sets a story like this apart is the execution. And while I have a pretty good guess what that’s going to look like, I don’t know for certain, and as such, things feel a touch incomplete.

Final Verdict: 7.0 – Jordan and Moustafa chamber a live round, for sure. But it will take at least one more issue to tell if they’ll hit their mark.