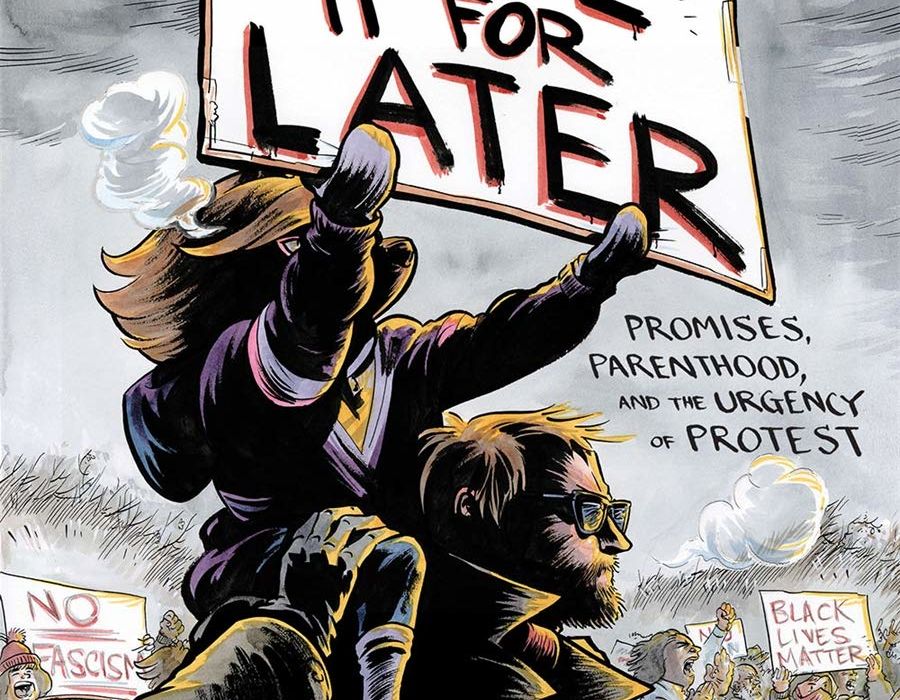 “This is NOT a parenting book OR an activist guide,” Nate Powell declares in the opening of “Save It For Later: Promises, Parenthood, and the Urgency of Protest” (Abrams ComicArts). Yet his collection of autobiographical chapters IS a testament to the fraught experiences of both in the period since the 2016 election. Both parenting and activism, desperately important endeavors, are rarely well-served by trite how-to books. Both raising children and making “good trouble,” in John Lewis’s phrasing, summon the best of us and our ideals. And so, both can leave us with a mess of questions, a yearning for sympathy, a despair of impossibility. But both parenting and activism are also powered by hope, and in Nate Powell’s brilliantly cartooned essays, hope draws its messages in large rectangles and takes its ideals fearlessly to the streets. 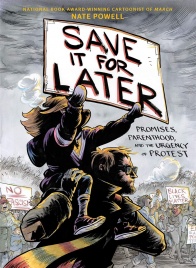 Written and Illustrated by Nate Powell

In seven interwoven comics essays, author and graphic novelist Nate Powell addresses living in an era of what he calls “necessary protest.” “Save It for Later: Promises, Parenthood, and the Urgency of Protest” is Powell’s reflection on witnessing the collapse of discourse in real time while drawing the award-winning trilogy “March,” written by Congressman John Lewis and Andrew Aydin, this generation’s preeminent historical account of nonviolent revolution in the civil rights movement. Powell highlights both the danger of normalized paramilitary presence symbols in consumer pop culture, and the roles we play individually as we interact with our communities, families, and society at large.

If you’re somehow unfamiliar with Nate Powell, his art will instantly spark recognition. The artist of the John Lewis “March” trilogy, Powell was initially a surprising, if intriguing, pick when that project by Lewis, Powell, and Andrew Ayden was first announced almost a decade ago. By then, Powell’s “Swallow Me Whole,” “Please Release,” “Sounds of Your Name,” and “The Silence of Friends” were already known to graphic novel readers, and his gift for capturing psychological depth, emotions both fraught and free, and subtleties of social and racial relationships already proven. But perhaps it was precisely because Powell was viewed as a great renderer of complex interiorities rather than a panoramic draftsperson of historical landscapes that his work on “March” fit so definitively. Something in Powell’s comics art is fiercely and defiantly subjective, not as an apologia or artifice of authenticity, but as an aesthetic candor, an assiduous striving for truth with a small “t.” It is the truth in the punk music or the blues, the best of Southern novelists, the most tenderly honest of searing biopics or searching documentaries.

I describe that tone of Powell’s art in order to explain why this book, the kind I’d buy but rarely find the mood to actually digest, turned out so meaningful to me, so therapeutic in fact, well worth overcoming my empathic exhaustion. Powell’s earnestness, as an artist, as an organizer, as a parent, as a person of political convictions and ideals, will go a long way for any reader but the most cynical. His presentation of himself as narrator and as character doesn’t pull punches. He is morally clear-eyed one minute, plagued by doubts the next. He is embittered or afraid in one scene, overtaken by inspiration from Lewis or his daughter the next. He is courageously action-oriented at times; at others, he is wading through miles of inner turmoil. All of it attests to how none of our worthwhile efforts are easy, and yet we dare not fail to act.

My admiration for Powell has grown seeing how he’s used his visibility to organize and rally local political action, to direct the energies of his comics and music communities to the civic commons where cultural rubber meets the road of human lives and stakes. “Save It For Later” bottles up the enthusiasm I’ve heard in interviews, the fierce political resistance in his arts, the vibrant amplification of needed voices in his social media.

But what crystallizes all of these energies in this book is Powell the parent. The cover of “Save It For Later” is iconic: Powell marching amid protestors with “Black Lives Matter” and “No Fascism” signs, but he’s not carrying a sign himself. Instead, his cartoon version of his daughter sits atop his shoulders, holding up a sign with the book’s title. The motivations, the inspiration, the reasons we need to fight on couldn’t be clearer.

What will stay unforgettable to me as a reader is how affectingly Powell portrays the morning after the 2016 election, when that pallor of crushing fear and anger seemed to fall on the world for many of us. Especially the lacerating sting, when our daughters asked us if they had in fact woken to a world where the US had its first woman president, as we had told them polls almost certainly predicted. And instead, to kneel and tell them the villain we explained had been exploiting the worst of us (and would never win!) was heading to the White House. How do we describe this world to our children? The sinking in the pits of our stomachs that early November. The gut punch of bigoted neighbors. The steady determination to action that had us marching. The million complex questions we weighed along the way in the days after.

How Powell captures those moments so poignantly illustrates the potency of his cartooning choices. Powell almost always employs brushy blacks and grays against white, or white text and art on heavy backgrounds of black, along with minimally boxed and ballooned lettering and panels to effectuate a richly subjective flow to his narrating. His visuals move, like consciousness, between the immediacy of his daughter or partner in front of him and flashes of MAGA crowds from the news or sordid white racist mobs of recent history, blending the presence of people he loves with the specters of brutal crowd terrorism. Subtle but striking uses of color lend shadows of soul and emotion to certain pages. heightening the vitriol of gloating Trumpers or the soft blue of intent protest. Powell’s unmistakable style mixes here with his nearest and realest experience. The sincerity seeps from every page.

For me, though, the most intriguing and effective artistic twist is Powell’s rendition of his daughter and other children with cartoon animal faces, in his daughter’s case adorned with a unicorn horn sitting above her distinctive and highly stylish glasses. There’s a simplifying power to children. Powell often shows himself mired in questions about what’s right, about his role. When his daughter asks if they will march, all becomes clear. John Lewis’ inspiration doubtless stirs Powell often, just as he is moved by the human urgency of the political moment. But repeatedly, Powell finds clarity amidst the complexity when he considers what legacy he leaves to his daughter, what witness we bear to our children.

The first chapter of “Save It For Later” is entitled “Buttered Noodles,” a reference to the comfort food Powell turns to when the world feels catastrophic. I have felt and feel a similar desperation, my life’s sequential panels covered in darkened backgrounds this year, making everything feel tight, even suffocating. Powell’s depiction of himself, aggrieved and eating buttered noodles, struck a disturbing chord of resonance with me.

The following page, though, with little time to dwell in that hollow, Powell sees his daughter’s “oblivious joy.” The subsequent pages are bathed in a sunlit orange, and the family joins a march. Powell hoists her on his back, an iconic image that indelibly speaks to why we have to persevere toward justice. Resistance to powerful forces links hands with refusal to despair. In Powell’s work and world view, there’s no time for bitterness. Our children call on us to save it all for later.