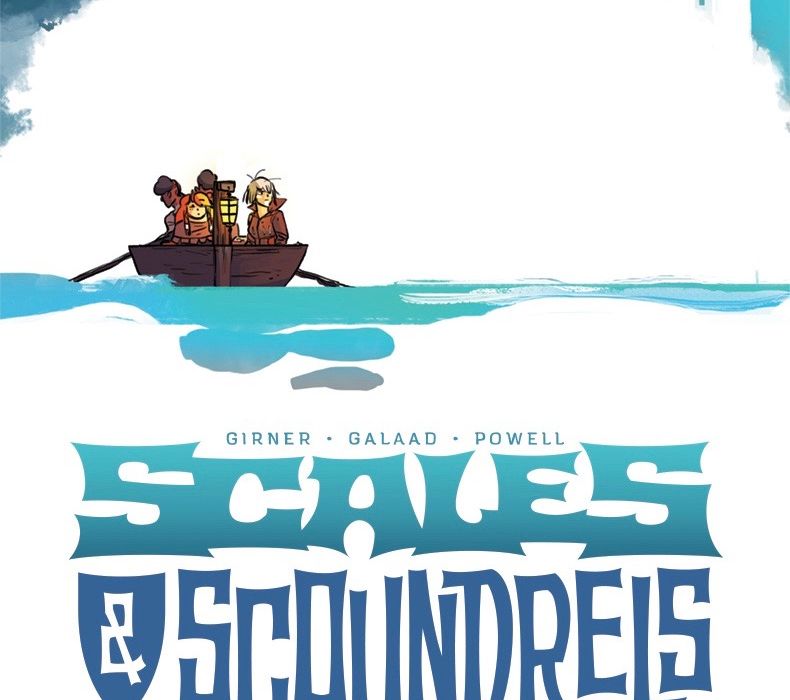 After three stellar issues, things slow down considerably as the secondary characters dig deeper into their individual backstories in the unremarkable underground city of Sogbottom. (Warning, minor spoilers ahead.) 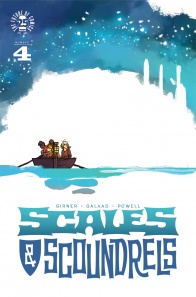 Dorma shines a light on what really motivates her journey into this darkness, and our adventurers decide to press on, down a forgotten river, to an ocean black as midnight.

From the opening pages of the first issue onward, “Scales & Scoundrels” writer Sebastian Girner (co-creator of the unbridled silliness that is “Shirtless Bear-Fighter”) has unabashedly referenced classic Swords and Sorcery tropes akin to those found in “The Lord of the Rings” and Dungeons & Dragons. Like a +2 magic broadsword found in a glittering pile of treasure, however, it’s a fact cuts both ways. On one hand, it’s super easy to pick and immediately connect with the story. On the other hand, it doesn’t really break any new ground. It’s also important to note that this is an all ages title and set your expectations accordingly, but even by those standards, S&S #4 is pretty slow. To continue the analogy above, this is either the part in Tolkien where the dwarves sing an epic song or that moment in D&D where a new player joins the game and feels compelled to share their character’s entire backstory.

Happily, as in the debut issue, the book’s opening scene is brilliant. Thanks to a bright yellow booger, a fish hook and our protagonist Luvander suddenly splashing down out of nowhere into an otherwise placid underground lake, Galaad’s gorgeously rendered, thoroughly immersive panels immediately and humorously thrust us right into the heart of the action. The inks are simple but highly effective, the colors are radiant and the pacing is pitch perfect – the exact kind of scene that readers crave and critics love, immediately whisking you away another world. Unfortunately, the magic of that scene quickly fades as the characters traipse around and chat, stop to eat and chat, and then traipse around and chat some more for fully half the book.

Granted, we learn some interesting things about Sogbottom (the underground village at the bottom of the world, “deep as any dwarf ever dug”), Dorma (a female dwarf and newest member of the party), Yaji (a very likable dwarf who doesn’t join our heroes’ quest but seems like he may return somewhere down the line) and some of the more nuanced reasons for the tension between Prince Aki and his bodyguard Koro, but that’s an awful lot of exposition to pack into a single issue without any time away for battles and skirmishes. To be sure, there are some humorous quips and subtle jabs sprinkled into the dialogue, but they’re a bit too few and far between. As the series has progressed, the comedic moments seem to have lessened and that definitely needs to change. This series clearly works best when it sticks to the basics, fully surrenders to its own childlike sense of wonder and doesn’t take itself too seriously – more boogers and less backstory.

Thankfully, once the characters finally leave Sogbottom and continue their quest “far down the River Ebony, under the Drowning Sky and through the Weeping Forest” things quickly brighten up, both literally and figuratively. Galaad’s artwork transitions from the lackluster earth tones than dominated the sluggish middle to vibrant aqua greens, pale blues and deep purples beneath a multicolored rainbow sherbet sky. Similarly, the paneling also excels, mixing an array of close-ups that focus on facial expressions with bigger, more theatrical scenes that capture the sudden drama and quickening action.

Not coincidentally, as the visuals intensify, the dialogue suddenly becomes snappier and more energetic, too. Luvander, in particular, suddenly returns to form, quipping things like, “Oh, sooo sorry, Prince Snooze-A-Lot” and “Grrr. There’d better be an extra big treasure at the end of all of this.” It’s literally a different world, almost leaving the characters breathless as they soak in their new surroundings and speculate about what lies ahead.

Ultimately, the chapter comes to a well made conclusion and the overall shape of the narrative makes total sense (with a final cliffhanger image that definitely piques our interest and leaves us wanting more), so hopefully we’ve now dispensed with all of the important exposition. The four main characters have assembled and fully articulated their individual backstories and reasons to be on this quest. We understand their motivations and overarching goals. It’s time to get back at it and focus on the prize. As Luvander said in the very first issue, “There’s a whole world out there filled with treasure. Gold and glory to those with the will to take them!”

Obviously, this is Luvander’s story. It’s great to see a cast of characters who are each well rounded and fully realized. That said, now that the others have had their moment, it’s time to recenter things on our hero’s original vision.