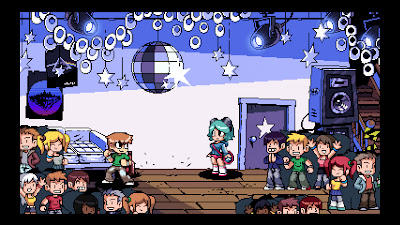 In a world faced with realistic graphics and story-laden plots perhaps it is a bit refreshing to play something like Scott Pilgrim vs. The World: The Game (whew), a game that debunks the idea that all movie games must suck – or does it – yes it does. Scott Pilgrim KO’s the conception that licensed games must be lackluster; perhaps the downloadable route is something more developers should do.

The game keeps the story to the basic framework that the graphic novels set forth but provided that you have read the books you will be surprised what the developers at Ubisoft got right – and how much they managed to stuff in.

The gameplay is a old-school (punishingly so, at times) Streets of Rage, Double Dragon style game and you would be remiss to not feel some sense of nostalgia pulling at your heartstrings on your journey through the Toronto-styled overworld.

The sprites are wonderfully animated and I often found myself wondering if I would have really been about to see a game that looked this good in the early nineties (the style that they were going for). The “cutscenes” are cutesy pictures of the outcomes of each level and every time I watched one I could not help but smile or laugh depending on what I was looking at.

The soundtrack is perhaps the best part of the game – you know, other than having a game to play it to – provided by Anamanaguchi. Particular favorites were world 1’s song and world 3’s.

The game has 4-player couch co-op where you can play as a part of Sex Bob-Omb (as a taunt). You get a rating, comparatively to the people that you were playing with, at the end of each level. There is no online co-op and though I am sure that it was an issue of time, I see this game as more fun played on the couch with 3 other friends.

Scott Pilgrim: The Game had a lot to offer: two secret characters to unlock, paths on the overworld that do not unlock during the natural progression through the game, and easter eggs galore (personal favorite was the goku sprite).

4.5 out of 5
Review based on retail Playstation Network version provided by Ubisoft.