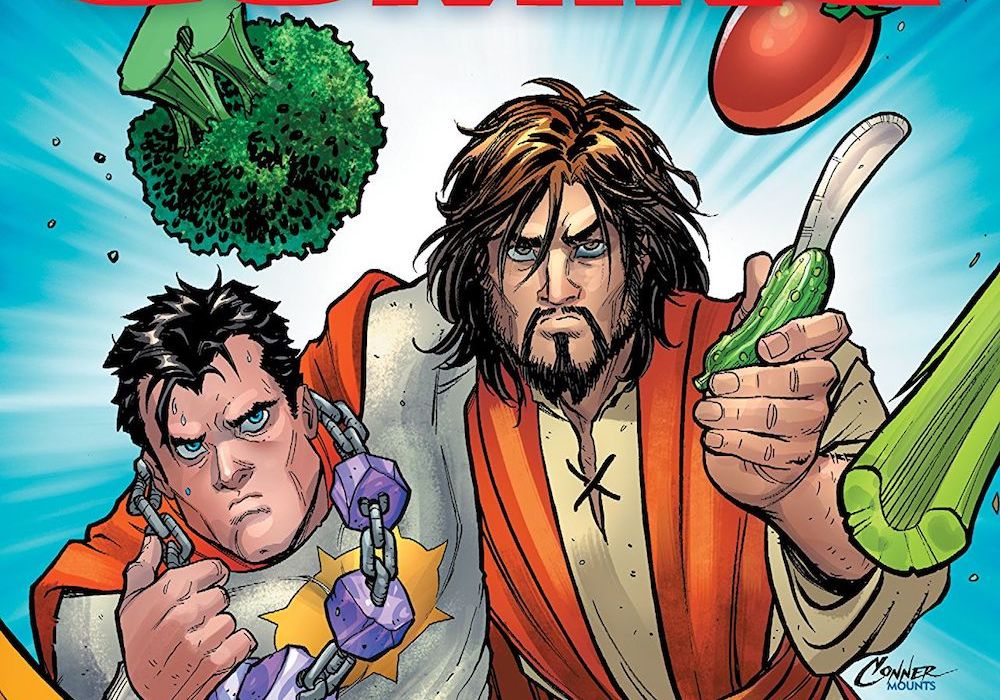 “Second Coming,” the once DC and now AHOY! comic about Jesus and a superhero, is wrapping up its first (of hopefully many) volume(s). The series manages to do a whole lot well, and pulls off an ending that feels conclusive but also open for more down the road, all the while being one of the most visually interesting books out there.

Extra-sized first season finale, featuring 30 pages of story! Sunstar and Shiela leave Jesus in charge as they go off on their honeymoon. Satan tempts Jesus one last time.

Mark Russell is as close to a sure thing as you can get in comics today, infusing each of his stories with unexpected heart, legitimately funny comedy, and a grasp of scripting that too many of his contemporaries simply don’t have. “Second Coming” could very easily be any number of things: an easy joke, an anti-religion screed, an anti-superhero comics manifesto, or simply something that never exceeds its premise.

Instead, Russell, especially in this final issue, weaves together disparate emotional elements about parenting, expectation, responsibility, and faith, and doesn’t sacrifice any of the humor that got him here. It is legitimately rare to read a story in which you feel sorry for God, Satan, and a faux-Superman, but that is what Russell has managed to do. I’ve got a degree in theology, and while Russell doesn’t exactly attempt midrash or apologetics here, he manages to find a point of focus for each of the theological characters, from Judas to Jesus, that makes them eminently relatable, and each tragic in their own way.

The book is also an embarrassment of artistic riches, with Leonard Kirk and Richard Pace each doing their very unique thing within the book. Pace’s work is less polished than Kirk’s, which adds a timeless filter to it, and fits perfectly with the Jesus sequences for which he is responsible. His work feels dusty and calloused, like the feet of those walking the desert in sandals. There is still a lot of humor in his art, but all of it is balanced with the gravity of the players at the center.

Kirk’s work, meanwhile, is both a commentary on superhero comics and a very effective superhero comic. Because of this issue’s main Sunstar stories taking place in not-Gorilla City and at a wedding, Kirk’s work gets the majority of the humor, and he is a master at the subtle integration. Whether it is Night Justice throwing up metal horns as he DJs the reception, or the facial expressions of apes getting their asses kicked, Kirk is able to highlight the ridiculousness of the situation without ridiculing the medium. It’s a tricky line to walk, but Kirk does a fine job.

This issue spends the most time of any of the six in Biblical times, and for all the bitching Jesus does about people getting his message wrong, Russell’s words in Jesus’s mouth are reasonably close to what is written in scripture. The sequence of Judas’s betrayal is given a capitalist slant, and the button at the end of it is truly heartbreaking. Removed from a religious context, it is hard to get mad at the messages of Christ, and “Second Coming” does its best to present those teachings free of the the tethers to any of the various institutions that sprung up from his teachings.

The book started out being about Jesus, but at some point, Sunstar became the focal point of the series. This final issue somewhat splits the difference, though it puts a little more emphasis on Sunstar, as his story is the one that is given the most forward momentum. The issue ends with a resolution to a plot thread introduced in the first issue, and seems likely to be the source of most of the second volume’s focus. Jesus’s story is less clear going forward, but he’s the son of God, I’m sure he’ll have a few ideas as to where to go next.

Now that the series is taking a break, it is a good time to reflect on its auspicious origins as first a Vertigo/DC title, but after pressure from various groups, was dropped and picked up by AHOY!. While there are certainly parts of the book that would offend those who can’t separate their beliefs from works of fiction, the book never really comes off as anti-Jesus, and certainly not against his teachings. God, the father, gets off less easily, but even still, comes off as more damaged than mean.

It’s hard for me to understand people getting upset over fiction, because even though I count myself among believers, I have always found it pretty easy to look at things from a detached perspective. Just as I don’t get upset when I encounter a piece of fiction or art that disagrees with my beliefs, I don’t simply celebrate something when it agrees. There is nothing more hypocritical than seeing people rallying around Kanye West for his Gospel-influenced music, ignoring all of his beliefs and positions that are far less Christian than he had before he started his Sunday Service concerts.

Look, life is hard, and religion is a tough nut to crack, even for those who happily ascribe to one. “Second Coming” acknowledges both of these realities, and creates a story that is not out to convert anyone to any one side, but rather show the humanity at the heart of the two great cultures that make up the American experience in 2020: superheroes and Christianity. The book shows you that even if you deny one or the other, they are built on the idea of being inspirational help to those in need. And, in a world where quite literal villains are taking power all over the world, we need both the forgiving love of Jesus and the Nazi-punching of Sunstar to help get us through this thing called life.

Final Verdict: 8.5 – A fine finale to one of the best miniseries of the past year.