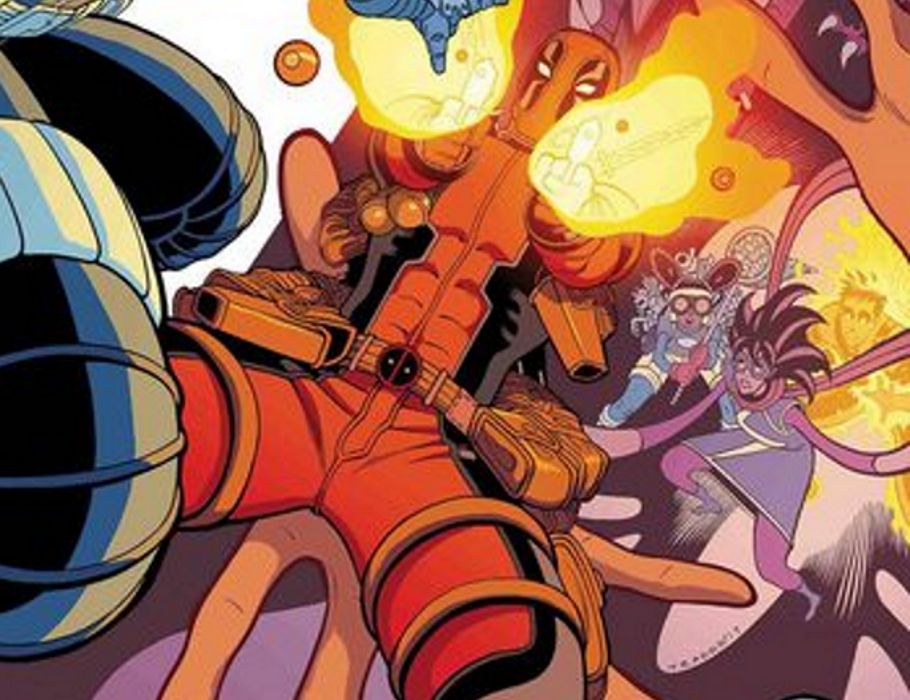 With the big push to make the Inhumans A Thing, Marvel has tried to put forward a number of books with Inhuman characters. “Secret Warriors” is the latest attempt, and follows a team of characters from wildly different books. This can easily be a recipe for interesting character dynamics, or for a a scattershot mess. Fortunately, “Secret Warriors” is the former and not the latter. 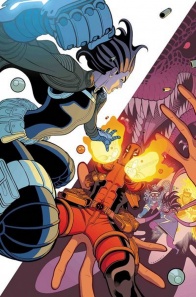 THE SECRET EMPIRE HAS FALLEN – AND NOW IT’S DEADPOOL’S TURN. During the Hydra takeover, Deadpo6ol killed Agent Phil Coulson, Quake’s mentor and close friend. So now Quake is going to kill Deadpool. But not if the rest of the Secret Warriors have anything to say about it! (I mean, Devil Dinosaur could kinda go either way. Also he can’t speak.

This latest issue has the team mostly separated, but that just gives writer Matthew Rosenberg a chance to show off one-on-one interactions. Inferno begging Moon Girl to do his sister’s college homework is a highlight, as is Karnak’s gruff handling of Inhuman prince Ahura. Quake is off on her own solo job, but her story has her crossing paths with a number of familiar faces.

Which is another thing this book does very well. For years, Marvel books have leaned heavily on recognizable guest stars. “Secret Warriors” does a great job at using some overplayed characters. Villains like Taskmaster, Bullseye, and the criminally underrated Dark Beast all get up to some villainous shenanigans, but the real surprise for me was Deadpool. I’m fairly sick of the Merc With the Mouth being inserted into every book that will have him, but here Deadpool actually kind of makes sense. Quake, herself a top level secret agent, dives into the world of killers for hire. Deadpool isn’t used as a punch line, or a lonely guy looking for friendship, but as a dangerous killer, and Rosenberg does a great job at selling it, even amidst the Bea Arthur jokes.

That blending of tones is the best part of the issue. It’s hard to imagine a story about a plucky girl genius and her pet dinosaur and a world-class superspy, but it works. Inferno is a heavy metal superhero, Karnak is a warrior monk without a sense of humor, and Kamala Khan is a regular teen with superpowers, and that friction is central to the story. No one feels twisted into knots to fit the story. Everyone feels like their own volatile ingredient, which makes the final unstable reaction all the more fun to watch unfold.

Artist Juanan Ramirez goes a step beyond house style, but his artwork is very recognizably Marvel. It would not be out of place in an “X-Men” or “Guardians of the Galaxy” title. That’s probably for the best, because he is juggling a lot of characters and locations. If he drew in a highly stylized David Aja mode, this would feel like a Karnak and friends book. It doesn’t. The lack of distinctiveness supports the tone of the book.

That being said, this is the Marvel universe, so a “lack of distinctiveness” still gives Ramirez a chance to draw Taskmaster stabbing a naked robot Dum-Dum Dugan with a Final-Fantasy-sized sword. Ramirez doesn’t stuff the backgrounds with detail, but I smiled at an ad for Punisher t-shirts (50% off), and the world building idea that some teenager is buying logo shirts of a dangerous vigilante. I felt thoroughly planted in the zaniness of a superhero world, but one that could exist right outside your window.

That “lack of distinctiveness” is also what gives the story room to thrive. All of that being said, “Secret Warriors” isn’t re-writing the book on how to tell a Marvel story, but it may be setting the standard. Sometimes it feels like Marvel is throwing out a dozen ideas and seeing which one resonates with people. Among all the events, rebranded superheroes, the push for the Inhumans, and the like-a-reboot-but-not-really initiatives, sometimes it’s hard to remember that the creators at Marvel are doing fine work. It’s a little hard to place “Secret Warriors” in the wider publishing initiative, but honestly who cares? The creators are doing fine work, mixing and matching interesting and sometimes overlooked characters.

“Secret Warriors” is the best kind of mess. It’s the book you get when you combine a lot of diametrically opposed personalities. Some people feel that there’s a push to replace the X-Men with the Inhumans. If that means telling good stories about a band of superpowered individuals who need to work together to overcome their differences, I don’t care if their powers come from X-genes or terrigenesis. That’s a great premise for a superhero comic, and “Secret Warriors” delivers where it counts.

Final Verdict: 7.6 – A fine story of clashing personalities overcoming their differences. And Deadpool is there too.