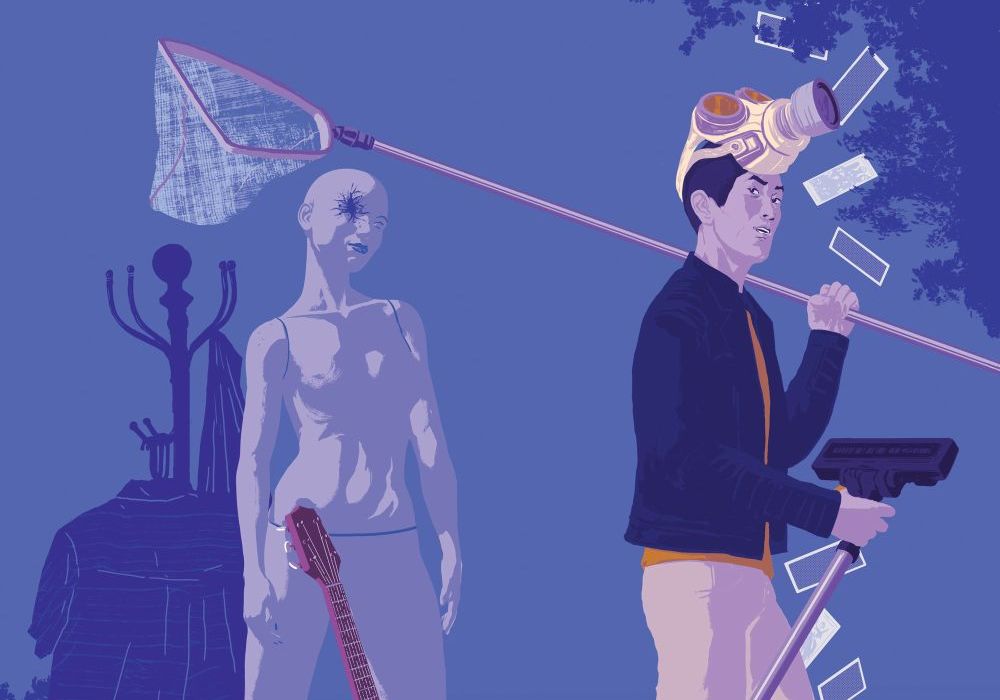 Valiant’s “Secret Weapons” mini-series may have come and gone but that doesn’t mean we’re done with them just yet. In this one-shot, Owen returns to give us a rundown of the items of his garage sale. Yeah, not my idea of an exciting issue either but hey, if it works to get me invested in this character and act as a door to the Valiant universe, by all means frame it this way. Spoilers ahead. 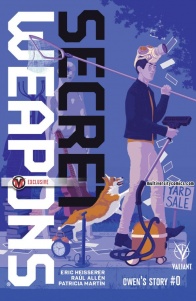 Owen Cho is a conjurer…which can be a great deal more frustrating than it sounds. You see, Owen’s “psiot” ability – unlocked at great expense and even greater danger – allows him to materialize objects out of thin air…but he can’t control what to summon or when it might arrive. But what do you do with a heap of undesirable objects conjured from parts unknown, anyway? Have a garage sale, of course!
Before the Secret Weapons take center stage in HARBINGER WARS 2 this summer, witness one of the year’s most unlikely and unorthodox origin stories as Heisserer, Allén, and Martín come together once again to recount a life lived one item at a time in “Owen’s Story”!

Having not read any of Valiant’s “Secret Weapons,” I don’t know how well this does as a prequel to Owen in that series or what insights that gives into his arc for that mini. What I do know is that Heisserer does a fantastic job of introducing us to Owen, his powerset, his attitude towards these powers while also widening the greater Valiant universe ever so slightly. For anyone who wants to get into Valiant, as I do, this is the type of story that will bring you in.

It’s a tightly focused character piece that offers easily accessible information about relevant pieces of the Valiant universe, such as Harada and Psiots and their role as powerful outcasts ala mutants-but-not, and tying it into events that I’m sure are explored in the main series without overburdening new readers. Heisserer, Allén, and Martín accomplish a lot of this through the semi-atemporal presentation of events and the repetition in panel layout.

The layout choices are what stuck out to me the most. Allén and Martín go all out on the garage sale theme, reflecting it in the paneling and in the pacing of the story. Price tags act as scene breakers, much like in a Priest story, and price tag shaped panels bookend the issue itself. Something that shouldn’t be surprising as this whole issue acts as a self-contained scene for the greater “Secret Weapons” series that preceded it.

The fragmentary nature of each page, which is littered with panels, as well as the literal focus on going item by item, is reflective of the hodgepodge found at a garage sale. It makes sense to the seller but, to anyone else, it’s just a collection of items. This also acts as a simple and easy way to clue the audience into how Owen’s powers work without the big expository scenes. Moreover, the unity of the paneling across the central section of the story creates a rhythm for the reader. It helps keep us focused on the seemingly disconnected events and to pick up on what is important in each scene as well as dividing the book up into its three distinct parts: Owen attempting to understand his powers, the attack on the institute and the garage sale.

That being said, these decisions, while intellectually sound, don’t translate perfectly into an easily read story. I know I said that this is a great starting point, and it is, but the comic itself is very dense with panels. Most of the pages are at least nine panels, with four on top and bottom and one in the center. Other have more. In going for this paneling layout, the artwork gets squished into these tiny boxes. That would be fine for shots of inanimate objects or close-up but most of these panels are full-body shots or shots with two or more people in them.

Because of this, people, Owen especially, feel small. Even in the large central panel, people are placed receded into the background so that the location takes up most of the panel space instead of the characters. The characters are still expressive and distinct and the pacing between panels is always a great balance of decompressed and fast paced scene changes, which is a testament to the artist’s skills. However, in a character piece, feeling distant to the main character is a problem.

And that is my biggest complaint here. While I feel that this is a fantastic introduction to Owen, that’s all it feels like, an introduction. It is constrained by being set before the main “Secret Weapons” mini and can only do so much with Owen’s character and the larger events around him. I don’t know why Psiots are hated and, if I hadn’t read the intro page, I wouldn’t have even known how Psiots come to be. Heck, I know very little about the other characters that show up.

This is “Owen’s Story” however and as such, the others do not matter to this narrative beyond their interactions with him and his strange item creating ability. Still, the story itself was engaging thanks to the warmth of the art and the naturalistic writing. The narrative took its time to let us get to know Owen and now I have another character to look out for when I’m reading Valiant books.

Final Verdict: 6.9 – A great entry point to Valiant and a wonderful character issue that is held back by a cramped layout and the constraints of it being a character focused prequel. So, what you’d expect from a zero issue for a series that already exists.