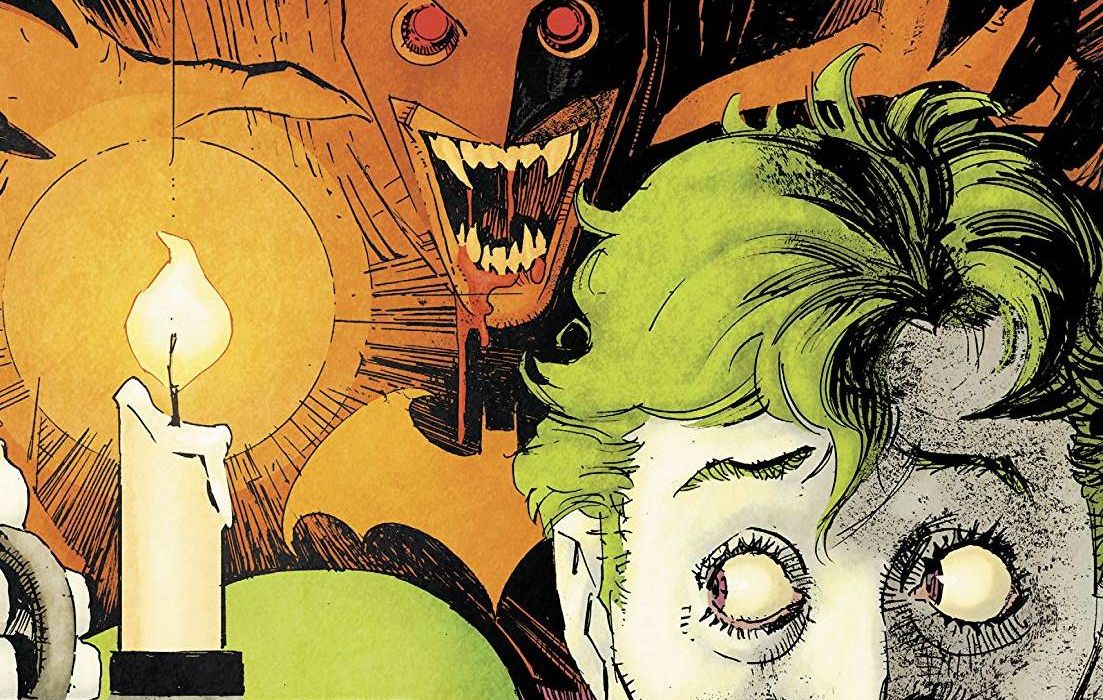 DC Comics jumps right into the Halloween season with a new anthology of terror. Eight nightmarish tales to chill your bones on a windy Autumn evening. Minor Spoilers Ahead! 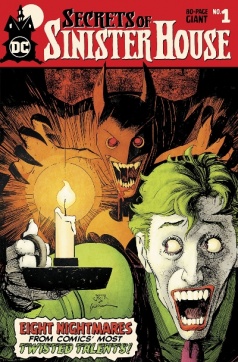 Just in time for Halloween, DC Comics looks to the past to bring us “Secrets of Sinister House.” This one-shot is a giant, 80 page horror anthology that takes inspiration from older titles like “Vault of Horror,” “Creepy” and even their own “House of Secrets” for its format while bringing in a wide variety of styles from the horror genre to fill its pages. As the DC multiverse is no stranger to magic, the paranormal, and all sorts of unbelievable scenarios, it should be no surprise that it is rife with possible horror stories.

A laundry list of writers and artists coming from the wide world of comics come together to deliver us eight stories spanning multiple horror sub-genres to frighten us during the spookiest time of the year. So sit back, turn off all the lights but the one you’re reading by and enjoy this massive collection from some of the best creatives in comics.

The first story is ‘Nightmare Mist.’ Taking us to Earth 43, fans of the Red Rain Batman will be excited to return to this alternate reality. A world where a vampiric virus has ravaged Gotham City and many other places – Bruce Wayne is dead, but the Batman remains. It gives us a further look at how Batman operates as an immortal monster. It is clear that his motives haven’t changed much; having to face an agent of the Court of Owls to ensure the safety of an old friend’s child. With Rafael Albuquerque co-writing and illustrating this tale, there is a clear kinship to “American Vampire,” with his version of this Batman taking on many of the physical traits of the bloodsuckers in that title. It is a well done action/horror short to kick off this book, with plenty of sweeping darkness and violence to keep things truly harrowing. Albuquergue’s pencils and McCaig’s colors make for a wild yet sleek Gothic style spilling right off the pages.

‘The Footsteps of Old Worm’ works on two levels: As both a supernatural and psychological terror sweeps into the life of The Atom – Ryan Choi – protege of Ray Palmer. Asked by a renowned entomologist for assistance with a case involving a sweeping bout of madness seemingly tied to some earthworms, Ryan uses his Atom powers to help investigate. What he doesn’t expect is to be pulled into something inexplicable that could leave him with terrible after effects for the rest of his life. Told mainly in the style of epistolary narrative from a journal entry, this is a truly disturbing story that will have you thinking about what evil lurks out of sight and how easily one can slip into madness. Watters gives us a story that is equal parts Lovecraft and King, and is quite possibly the most effective tale in this collection. The artwork serves the story just fine, but there isn’t anything terribly exciting outside of a few panels that really get into some of the horror. That isn’t the fault of either Kumar or Kalisz, this is very much a ‘show don’t tell’ kind of story and that’s part of why it works so well.

‘Calling Dr. Bonkers’ is one of the sillier stories. On October 30th, Zatanna comes across Harley Quinn hitchhiking on a desert highway and the unlikely pair head to Vegas, where Zatanna is set to perform on Halloween. Along the way a storm hits and they’re forced to stop at a motel for the night – a clown themed motel. Things go from quirky to scary very quickly and the two must band together to survive the night. Mildly fun, but a lot of the humor doesn’t land and it isn’t particularly scary, so it feels a little lost. It also leans too hard into trying to make clowns scary and the two leads don’t do anything intersting. Far from Dini’s best, but it isn’t a total loss. On its own it would mean very little, but nestled amongst these other stories it keeps in tone with the overall creepy vibe.

The next story, ‘Out of my Skin,’ goes for scary sci-fi, and because Martian Manhunter is the hero he feels right at home. Opening up with something that would feel right at home in a “Swamp Thing” comic, animals are being found without any skin. When a man is found murdered and skinned, the police are brought in and Detective John Jones is on the case. Realzing something otherworldly is the culprit, Jones sheds his human guise and the Manhunter tracks the monster down. Showcasing a horrific creature that looks like something Cronenberg and Lynch would dream up and try to raise as their own, this has some icky and wild imagery. Lopez’s story is decent, but would truly work better fleshed out in a longer issue. It tries to tell too much and not enough at the same time. Drawn in a more realistic style, this could have been a truly disgusting story to read, but Hester’s softer, cartoonish style keeps it reeled in for a broader audience. Cox’s color work is excellent and somehow balances a palette that is both “Justice League Dark” and “Scooby-Doo.” Though set at night, most of the pages are bathed in light; and while the shadows really add a dynamic contrast to it overall, some of the details could have been hidden even more to keep things a little murkier.

Robbie Thompson writes ‘Dreamweaver,’ a Detective Chimp story poised as a “Justice League Dark’ mystery and it works in that way quite well. With the team missing, Detective Chimp must work his way through the clues, or lack of, and finds that nothing is as it seems. Its strongest quality is using the character in a smart way, moving him through various settings and situations quickly on his journey. Unfortunately there isn’t much to care about here. It is all a bit too bonkers and meandering for its own good. The artwork is fine and works best when focusing on Bobo and some of his past adventures in early panels.

‘House of the Dead’ is the only Sinister House original and focuses on a family moving into an old home with a dark past. John Layman gives us a classic haunted house story that has it all: murder, occultists, creepy dolls, and people only the couple’s young child can see. It’s a string of tropes, but it works. There is a cameo from a DC hero, but I won’t spoil it here. You’ve seen it all before, but horror fans will get a kick out of it. Fornes’s artwork is loose and sketchy from afar and finely detailed as he moves in on certain things. The spooky bits are left in the shadows. Bellaire uses a beautiful muted palette that keeps things timeless and anchored in reality so when the supernatural stuff comes into frame they truly pop.

‘Fear 101’ is the other sci-fi/horror story in this book and it follows the two newest Green Lanterns, Jess and Simon, as their breakfast is interrupted by a distress call from a deep space freighter. Jess must faces demons on every page, those of her own mind’s making and some flesh and blood monsters, hellbent on ripping her apart. Che Grayson brings new readers into the lives of these Lanterns just enough to understand them, even without any prior reading. There’s horror straight through between Jess fighting her anxiety and doubts, and battling the creatures that took over the starship. Mendonca’s pencils illustrate an effective blend of superhero and horror story with nice color and ink work from Crabtree. Overall this story works best as a hardships and horrors from one’s own mind with the creature feature element falling to the side.

Closing out the book is ‘Hell is for Dreamers’ starring everyone’s favorite angry Brit – John Constantine. Haunted by an old Hollywood starlet looking for the man who murdered her, bringing her life and stardom to an early end. This story has the classic ‘Hellblazer’ tone with Constantine doing what he can, by any means necessary, in a quick and unforgiving manner. It would have been great to see this done in a more 1940s L.A. style, but there is enough of that to at least get a taste. Overall, this is a great little ghost story that jumps right into a revenge tale. Fans of Constantine will definitely enjoy this. It’s simple and scratches all the itches.

The stories that work best are the simple ones. As with all short stories, stick to what’s important and most effect, and leave the rest behind. The various creators pulled in to compile this book all bring something good-to-great to the table. While it may not all work, this book is a fun and spooky trip from cover to cover, and surprisingly worth the $9.99 cover price. Whether you like it all or not, there is no denying the talent on display here. The format is really just a collection of stories with no connective tissue attempting to make this more like “Tales From the Crypt.” While the use of a storyteller character is a tried and true element, it really isn’t needed here and it is nice to see not blatantly try to be something it’s not.

Final Verdict: 8.0, “Secrets of Sinister House” #1 is a mixed bag of terror and suspense that covers a decent amount of spooky genres that will appeal to all kinds of horror fans