The first issue of this eight part mini-series gives us a glimpse into the shadowy world of the 1%, as Peter Milligan and Leandro Fernandez explore just how far some people will go to maintain the crown of capitalism. 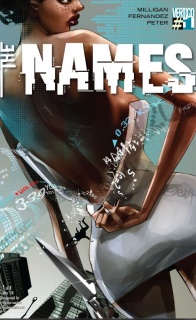 Katya Walker takes on the hidden power structure in the world of Big Money to find out who killed her husband, and why. No matter what it takes. No matter who she has to kill.

There’s a lot to be said about the power of an opening scene. Regardless of the format, an artist’s first connection with the audience needs to be powerful enough to convince them to step over the threshold from the real world to the one they’ve created; to paraphrase one of the most famous posters in TV history, they have to want to believe.

Milligan and Fernandez take a no-holds-barred approach to achieving this, beginning their story with a deadly dialogue between two strangers that gets the reader’s blood pumping and leaves them with a head full of questions — and that’s just the first few pages. Conscious, perhaps, of the limited run time at its disposal, this first issue barely takes its foot off the accelerator for its entire run. We’re made privy to a meticulously planned murder – a crime that is clearly going to be the driving force of the narrative – introduced to Katya Walker, a strong, female protagonist with a cynical approach to the ineptitude of the homicide squad, and given some time with an illuminati-esque collection of villains with all the means in the world, but no clear motive for the death in hand.

From here it’s really just a matter of time until our femme fatale meets the so-called ‘Names’ and a reckoning of sorts occurs.

While there’s nothing wrong with such a straight-forward plot structure, I do feel like this story’s set-up suffers a little from pacing issues and relying quite heavily on well-known character tropes. The opening death of Trader Kevin Walker is high-octane, but the speed at which it plays out limits any kind of meaningful character development. The proceeding pages are then left to display the classic motif of ‘widowed lover’s very believable concerns about the inconsistencies in their lover’s suicide are played off as grief’ as well as setting up Katya as a sensitive women/fully licensed badass in pretty much the same panel. Then, as we first meet the ‘Names’, they’re quipping to one another about a bloody uprising in Macedonia that occurred as a direct result of their manipulation of the stock market. Their callous attitude to the blood on their hands, coupled with their flashy, capitalist exteriors pins them immediately as the story’s villains. They’re painted so monochromatically that, while none of them actually has a moustache, you get the feeling that if they did,it’d be black and they’d be twirling it while laughing manically.

Fernandez’ arresting artwork is definitely one of the most notable features of this first issue. Heavily stylised and dynamic, Fernandez forgoes strict realism in favour of a more emotive portrayal of characters. The face of assassin/henchman The Surgeon has a grotesque grimace that solidifies him as a psychopath from the first close-up, while Adam, the billionaire conduit of the ‘Names’, is so similar to a caricatured Alan Rickman that you can practically hear Professor Snape’s sneer through the pages. Fernandez’ manipulation of the human frame extends to his bodies, and his execution of Katya is a well balanced mix of sexuality and strength. This double threat is sure to be a recurring theme throughout the story, and Fernandez’ sweeping style really sold me on the idea that his protagonist had the ability to kick ass and (excuse the pun) take names.

Fernandez’ artwork works alongside the writing to highlight the difference between the ‘good’ and the ‘bad’ in this issue. The villainous ‘Names’ are just as shadowy and indistinct as their machinations, lit mainly by the lurid tones of computer screens and strip lighting, while Katya and other more friendly characters are backed by warmer, more natural tones that quickly establish them as vastly different from their foes. In this, too, there is a certain element of melodrama that I’m hoping will be thinned out as characters are developed further through the plot as the lines between right and wrong begin to blur.

All that being said, there are some interesting elements in this opening issue that I’m looking forward to finding out about it more detail. The ‘Names’ drop reference to the Dark Loops, a species of ‘transmuted parcels of sentient information’ that they seem to rely upon, but not entirely control. We also get a glimpse of Kevin’s son/Katya’s stepson Philip. A child prodigy and social recluse, Philip’s talent with mathematics is surely going to play a vital role in the dismantling of the Names, if only Katya can get to the root of his unorthodox relationship with her and his father. These more unique narrative elements help “The Names” to deviate from the more traditional path of upper-middle class vengeance narrative that it seems to be heading down and I really hope that Milligan does more than glance down these other avenues as the story progresses.

While the twin concepts of an evil corporation and a spurned lover on the warpath are hardly ground-breaking, Milligan and Fernandez have managed to breathe fresh life into their new venture and have concocted a stylish mixture of sexuality and hyper-violence that leaves the audience breathless by the end. This opening issue asks a lot of questions, but it remains to be seen if the answers the series provides will prove a payoff that a cutthroat capitalist would accept as a decent trade-off.

Final Verdict: 6.7 – A decent start to what could end up being a very satisfying series