The sporadic but spectacular “Sex Criminals” is back, with an issue that rounds up the third arc and reminds us why Fraction and Zdarsky’s characters are so frustratingly fascinating. 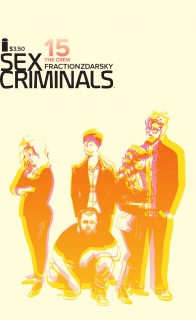 “Sex Criminals” is simultaneously one of the easiest and most difficult books to describe that I’m reading at the moment. While the strapline ‘an action comedy about a couple who stop time when they orgasm and use their powers to rob banks’ is probably enough to get most casual readers to check it out, trying to sell ‘a refreshing, nuanced, and surprisingly honest account of first one, then many, couples’ sexual and social relationships as they try and overcome their own prejudices and insecurities to make it work in the modern world’ is a bit more of a mouthful. What’s more, while both descriptions can be applied to parts of this book, it’s the slick, stylised, and self-aware way that Fraction and Zdarsky smash them both together that makes it such a compelling read.

That oddly satisfying conceptual dissonance is on full display in “Sex Criminals #15, as Fraction wraps this arc up and leaves the door to the next open, with the promise of even more sexually superpowered people entering the fray and threatening to disrupt Jon and Suzie’s semblance of calm.  As Jon, Suzie, and Dr. Kincaid have the world’s second most awkward breakfast (while, across town, Rachel and Robert snatch the crown with a meal of their own) Jon’s psychiatrist reveals that he’s been sleeping with Myrtle Spurge (still one of the best comic book names I’ve ever heard) and that she’s copied and stolen Jon’s personal files. Jon, Suzie, and the Doc, come clean to Jon’s shrink in a fantastically meta non-exchange, before Jon’s sucker-punched by an all-new sex criminal to see out both the issue and the arc.

While it sounds like a lot is happening in this issue, it’s definitely slower than most of its predecessors. Fraction takes his foot off the gas here to explore a single day in more meticulous detail than this book usually offers, and it gives us a chance to remind ourselves of just how each of our characters feel about one another. Plus, more importantly, it allows Jon to finally drop the L-bomb that he’s been fumbling around with for the past few issues. Safe to say, it could have gone better. Fraction injects Jon’s loving revelation with so much awkwardly relatable emotion that it’s a truly toe-curling start to the issue. Zdarsky executes the exchange perfectly, with two pages of almost identical, painfully decompressed panels of Jon and Suzie in a post-coital haze. Zdarsky’s skilfully subtle facial expressions offer up a plethora of mixed emotions without outright ‘saying’ anything, and really offers up a believable window into the miscommunication that plagues even the most solid of relationships.

This issue also feels a little less pacy because, in an attempt to wrap up the loose ends of the latest arc, it spends more time than most issues with secondary characters. most notably, we get a more in depth look at Robert (Rainbow, the ‘Pussy Doctor’) and Rach’s relationship as it begins to spiral. Fraction’s indie work has always pushed the boundaries of traditional scripting, but he really excels himself with Robert’s insecure and introspective musing over brunch in this issue. As Rach starts talking about nothing in particular, her text bubbles morph into simply ‘small talk small talk small talk’, and Zdarsky chimes in with an oppressive (or impressive, depending on your worldview) amount of phallic objects interjecting into Robert’s peripheral vision. There’s nothing particularly ‘super’ about this, or many of the interactions in this issue, but Fraction and Zdarsky’s honesty and insight help this issue step past traditional ‘genre’  tropes and towards something akin to real, visceral drama.

“Sex Criminals” is one of the weirdest, most quixotic books out there at the moment, constantly sidestepping convention in favour of keeping its readers on the back foot. The care and attention that Fraction and Zdarsky pay their well-realised characters belies the potentially juvenile nature of the content, and this third arc ends just as strongly as the first issue began. While there’s no end in sight for the flashy, sexually charged main narrative of “Sex Criminals”, I’d be just as happy to read about these fantastic, flawed, characters without the trappings of their libidinous escapades. Luckily, it looks like, with the introduction of yet more sex criminals, and Fraction showing no sign of stopping probing into the most intimate nooks and crannies of sexual (and non-sexual) relationships, we’re going to be blessed with more of both before too long.

Final Verdict: 8.0 – Fans of this series so far will find nothing not to like about this intimate and immersive end to the latest arc.