The second arc of “Shades of Magic” opens with blood spilled in the streets and danger looming around every corner. Prince Maxim Maresh is about to find out that the Pirate Queen was only the beginning of his problems. 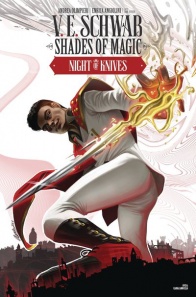 A new chapter begins for the hit fantasy comic, as New York Times bestseller V.E. Schwab continues to explore the world of her acclaimed fantasy novel series: Shades of Magic. Maxim Maresh has a target on his back. Every thug and thief on the Blood Coast is out to get the exiled prince of Red London, and his soldiers think he’s just another spoilt brat. Yet opportunity knocks – for the Night of Knives is here, an annual trial sure to prove his mettle. The only problem? No-one survives the night… Illustrated by with magical lustre by hit art team Andrea Olimpieri and Enrica Eren Angiolini.

I should open this review with a personal disclaimer: I have no experience with this writer or title, but I love fantasy, and both the Shades of Magic books and this comic book series have been recommended to me by people with good taste. So, while I can’t speak to how well this comic series fits into V. E. Schwab’s universe from the novels, I take it as a good sign that she’s also the writer on the comic book series.

What I can offer is the perspective of someone who is jumping on the “Shades of Magic” comic book series right here, at the start of this 4-issue arc, dubbed the ‘Night of Knives.’ As that person, I appreciate the “Story So Far” section in the issue’s credits page. Without the context of the events from the first arc, it’d be easy to feel lost at sea reading this issue.

Schwab doesn’t spend much time reintroducing us to characters or asking us to fall in love with them, possibly because we’re jumping on the series after the train’s already left the proverbial station a while ago. Readers looking for that build-up may want to catch up on the first volume of “Shades of Magic” before reading issue #5.

“Shades of Magic” #5 reads almost like a superhero comic set in a fantasy realm. There’s that feeling of a return to calm that comes after a major conflict is resolved, common for the beginning of new arcs, like this one. We get a couple of skirmishes this issue, as if following the rules of balance between action and exposition set forth in superhero comics, but they don’t feel like they carry the same amount of weight as a major battle that could actually endanger our protagonist.

Yet, even with a quieter issue with lower stakes for Prince Maxim Maresh, “Shades of Magic” #5 draws you in with gorgeous visuals and astounding detail. Illustrator Budi Setiawan gives the city a coarse, filthy, claustrophobic treatment you might imagine seeing in London during the Industrial Revolution. Setiawan’s detail extends to the rest of the panels, adding depth and texture to every scene that makes each leap off the page. The amount of detail shows Budi Setiawan’s vision of a city that has been around for a very long time and is showing its age.

Setiawan takes over for “Shades of Magic’s” original illustrator well. Like Andrea Olimpieri, Setiawan brings a sense of drama to the page, playing with shading and point of view. Quieter scenes tend to be framed head-on, roughly eye level, with shadows cast over faces. More dynamic sequences are often angled, bringing a wild or intimidating sense to the characters the panels portray. Enrica Eren Angiolini builds on that foundation, filling a background with red or orange to signify danger and highlight the silvery glint of a weapon.

Angiolini’s palette for “Shades of Magic” is softer, a little desaturated. It gives the sense of a fantasy world viewed through a haze. Gold, red and stark white pop against it, but most colors are a blur of browns and grays that blend together into a Medieval-ish soup common seen in fantasy. When magic is used, however, it breaks the palette with vibrant oranges or ethereal blues that feel jarring and alien against the world’s muted tones. It’s effective, considering how strange and jarring magic use would be in reality.

Almost as if meaning to slow the reader down and get them to absorb all of Setiawan and Angiolini’s lovely art, letterer Rob Steen often places word balloons across the page from one another. Their positions force the reader to zigzag across the page, slowing the reading experience down and ensuring the reader takes in each element in the panel before moving onto the next one.

Sound effects seem to take a backseat in “Shades of Magic.” Whether that’s a stylistic choice on the part of V. E. Schwab, or all the creators or just Rob Steen’s is anyone’s guess, but the few effects in the book were downplayed and small. They did all seem like they were from the same style of fonts, so points to Steen for establishing a very particular sound effect style for the book, and bonus points for bringing back thought bubbles!

So, to circle back to how I started this review, I don’t think you need to have read V. E. Schwab’s series of novels to enjoy the rich world of the “Shades of Magic” comic book series. While it would help give the comic a little more context, reading the series’ initial story arc would do loads more to get a grasp of the characters and the story’s setting. But even without that background, “Shades of Magic” #5 scratches that fantasy itch with plenty of swords and magic, danger and mystery for old readers and new ones, alike.

Final Verdict: 6.9 – Fantasy fans will be enchanted by “Shades of Magic” #5…so long as they’ve read the first four issues.