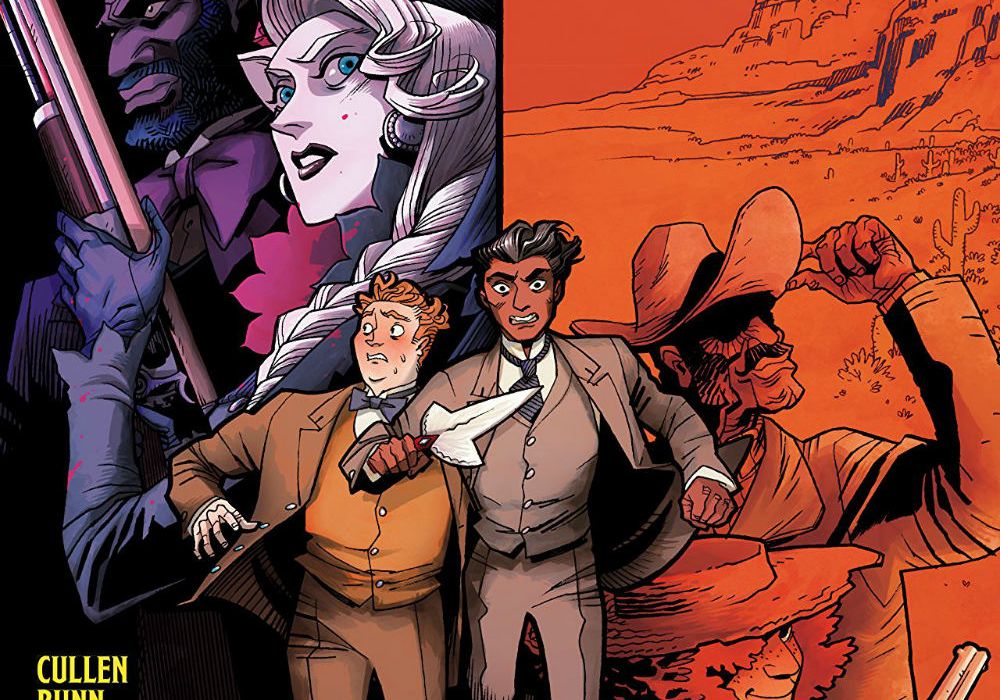 “Shadow Roads” #1 is the first issue in the sequel series to Cullen Bunn and Brian Hurtt’s “The Sixth Gun” series, and like its predecessor, continues in the vein of a supernatural western. Read on for our review, but be careful, as there will be some minor spoilers. 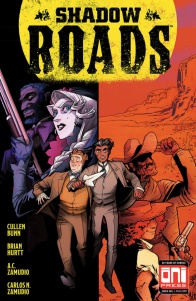 The world is thinnest at The Crossroads, a mythical plane that serves as a doorway throughout the universe. It is here that a band of adventurers throughout the Wild West gather, brought together by Gord Cantrell and Abigail Redmayne with a singular purpose: to fight back against the creatures that would endanger the sanctity of all creation.

SHADOW ROADS is the set in the world that remains after the conclusion of Cullen Bunn, Brian Hurtt and Bill Crabtree’s critically-acclaimed series, The Sixth Gun.

Before really getting into this review, I should probably say that I’ve never read any of “The Sixth Gun.” So, there may be some context for this series that I am missing, and there may be some deeper meanings to the story that I wasn’t able to catch. However, considering that I went into this issue knowing nothing about the world, “Shadow Roads” #1 was still a very entertaining and interesting read.

Bunn and Hurtt make it easy for new readers to jump on with this issue. In fact, if “The Sixth Gun” wasn’t mentioned in this issue’s solicits, I probably would have assumed that this was a standalone, entirely original series. The issue begins with an American Indian man named Henry, in England, going through an exhibit on his people, listening to a short, fat man talk about noble savages. The museum has exhibits featuring real, living Indian Americans put on display like dummies. While in this exhibit, Henry is confronted by an old, Indian man who gives him a ceremonial dagger and tells him that he must return to America.

This scene setting works as both a way to show the time at which this series takes place, and the world that Henry has to try to exist in. He is an outsider, someone viewed by most of his fellows in the college he is attending as just a curiosity, not an actual person. The script for “Shadow Roads” #1 is able to capture Henry’s feeling of being outside of the world in a very normal, human way. And it perfectly sets the stage for him being pulled out of the world in the more supernatural way later on.

Henry’s story is intertwined with the story of a black man in the American west, who is putting together a crew of people to fight some kind of monster. While this story doesn’t have much of a pay off in this issue, it does seem like important stage setting for the series as it goes forward. And it makes it clear, in more subtle ways that Henry’s story in London, that this is a series that understands it’s place in history, and ways race effected people’s lives at that time.

The art, from A.C. Zamudio, has a slightly cartoonish style to it, especially in character’s faces. There is an exaggeration of many of the character’s facial features, especially the white, oafish buffoons that Henry deals with in this issue. Henry’s face, by contrast, is kept relatively realistic. The contrast between these characters and Henry makes him seem like the most normal, natural human in the issue. It’s one of the ways that the issue centers itself around Henry and his experience with the world, and Zamudio does a great job with it.

The colors by Carlos Zamudio do a wonderful job creating tone and setting for the issue. The scenes that take place in west are colored all in burnt oranges and tans, colors that evoke the feeling of the desert and the wild west. In Henry’s portion of the story the colors are softer and more varied, making it feel, at least at first, like his story takes place in something closer to our own world.

While much of the story is in a more realistic mode, once Henry and his companion leave the exhibit and board their train home, the issue does take a serious turn toward the supernatural. The train they are riding passes into what seems like some kind of other place, and they are attacked by creatures. Carlos and A.C. Zamudio also a good job on the action sequences in the issue. They are able make the train car feel extremely claustrophobic, and there is a moment later in the issue where the lights go off on the train, and the art is able to do a lot with mostly black panels, and just a few flashes of light from Henry’s ceremonial dagger. All that is to say, while the art does a good job at portraying the very human interactions that make up much of this issue, it also able to create fun, dynamic action sequences.

As far as first issues go, “Shadow Roads” #1 works to get the reader invested in where Henry’s story is going. It introduces you to the world that he exists in, the way in which he already exists outside of society, even before he encounters the supernatural. This is a series that is worth checking out, if you’re at all interested in supernatural westerns. “Shadow Roads” #1 is a book worth looking into, and I can’t wait to see where the series goes in the future.