Brian Hurtt both scripts and illustrates this issue as “Shadow Roads” kicks off its second arc. 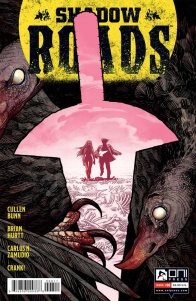 Finding themselves at loose ends following their defeat of the Hunter, the shootist Isabella and her traveling partner, Ghost Eyes, are made an intriguing offer by Deputy Marshal Karloff of the Black Stars. Meanwhile, Henry begins his mystical training under the tutelage of the eccentric medicine woman, Buzzard Wife.

In ‘The Crossroads,’ the first arc of “Shadow Roads,” readers were introduced to a host of new characters and locations. Yes, the arc had connections to Cullen Bunn and Brian Hurtt’s “The Sixth Gun,” but it was a loose connection. A few characters carried over, but for the most part it stood on its own and was completely new-reader friendly.

In ‘The New World,’ we get our first hard look at the threads that connect the two series with several callbacks to moments from “The Sixth Gun” ongoing series and its spin-off titles. “Shadow Roads” is framed in the greater context of the previous series… and it was like coming home. I love the mythology of “The Sixth Gun” and it’s fantastic to see it alive and growing here in “Shadow Roads.” And it does so in a way that I don’t think undermines any of “Shadow Road’s” autonomy. For anyone that’s only reading “Shadow Roads,” I don’t think they’ll feel like they’re missing a part of the story. (That said, I sure hope new readers feel compelled to pick up “The Sixth Gun,” because it’s one hell of a ride.)

“Shadow Roads” #6 features the series’ first guest artist… although given the artist is also the co-creator and writer, I’m not sure “guest” is quite the right term. Brian Hurtt drew forty-seven of the fifty issues of “The Sixth Gun,” and considering this issue’s links to the past, having him on art duties for this and the next issue is a rather appropriate choice. When “Shadow Roads” #6 touches on Abigail’s past and the fallout from the ending of “The Sixth Gun,” Hurtt’s art brings with it a weight of memories.

But at the same time “Shadow Roads” is a book that was established through A.C. Zamudio’s art. She introduced us to this new world and its characters, and with a different artist on the title, there’s always a bit of a shift. Things just feel a little different. Most notably, I find Isabella reads as a sharper character the way Zamudio draws her, whereas Hurtt’s version is softer, less spiky. It’s a small thing, but I think it speaks to what a powerful impression Zamudio made with the first arc that I think of her version of Isabella as the definitive version. However, other characters feel like the two artists are so in sync that all I see is the character—Abigail Redmayne is simply Abigail, never Zamudio or Hurtt’s version of Abigail. It reminds me how well Hurtt and Zamudio worked together on “The Sixth Gun: Valley of Death.” They share certain storytelling sensibilities.

There’s a lot humor in “Shadow Roads” #6, especially that humor that works best through body language, something both artists excel at. In these moments of humor I can feel Hurtt channeling his work on “Table Titans,” a series that’s first and foremost a comedy, but still has to be able to summon up the mood of The Fallen Veil’s world, which can be dark and threatening too. Throughout his run on “Table Titans” Hurtt had to rapidly switch between moods, often doing several at the same time, and that experience shows in “Shadow Roads,” especially in the sequence with Henry and the Buzzard Wife. The scene is small and intimate one moment, then large and epic, then playful and fun, and there’s no grinding of gears in these transitions.

Of course, it helps that Hurtt, Bunn, and Zamudio created such a strong cast for “Shadow Roads.” There’s a sequence in this issue with Izzy, Ghost Eyes, and Anton sitting around a table and talking, setting up the plot for later. It’s a scene that could be mechanical or plain, and yet it ends up being exceedingly memorable simply because of the way the characters play off of each other. These characters are so vividly alive on the page. With the cast they’ve put together, I feel like you could grab almost any two characters and put them together and something interesting would happen.

Abigail Redmayne steals the issue though. I suspect this is because I’ve already read so much about her in “The Sixth Gun,” especially the miniseries ‘Days of the Dead.’ I’ve got to be honest, ‘Days of the Dead’ is my least favorite story from “The Sixth Gun,” primarily because it’s so unrelentingly brutal to Abigail, and the way it ends, she felt like victim, a fridged character used to highlight Jesup Sutter’s pain. She’d been so utterly hollowed out by the end of that miniseries and I didn’t like how much that trauma defined her. Here in “Shadow Roads” #6, that material is revisited, and while there is clearly still pain there, it was satisfying to see it was also a source of strength for her.

And this strength didn’t come from nowhere either. Even though she didn’t speak about it in ‘The Crossroads,’ she wore it in her attitude and the way she interacted with other characters. In “Shadow Roads” Abigail has never read as a victim; she reads as formidable. Even when she died in issue #5, it was an act of strength and heroism.

“Shadow Roads” #6 was a great read, although admittedly, my enjoyment was greatly enhanced by it tapping into my “Sixth Gun” nostalgia. But even if I set that aside, the cast of characters is immensely engaging. “Shadow Roads” is an absolutely worthy successor to “The Sixth Gun,” able to serve as a stand-alone title while still building on existing mythology.

Final verdict: 9 – A grand stage has been set for future stories… Oh, this is going to be fun!