With the previous volume of “Shadowman” loosely redefining the character, Valiant Entertainment has another chance to bring back the hero and better establish him for the modern incarnation of Valiant. The publisher still utilizes Jack Boniface, the original hero of the series, as well as the rest of the core cast members from the initial volume, so how will the new Shadowman stand out from the rest of the pack. What approach will Andy Diggle and Valiant staple Stephen Segovia take to with the script and artwork? 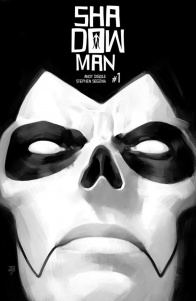 DON’T FEAR YOUR DEMONS… FIGHT THEM!

Orphaned as a child and raised on the margins of society, Jack Boniface never knew his place in the world. Until he discovered it waiting for him… in a darkness far older than the reign of men…

Unbeknownst to him, Jack was fated to become the next in a long lineage of Shadowmen – mortals bound to violent voodoo spirits of immense power – that could safeguard our world against incursions from realms beyond.

For years, he struggled to control the loa’s murderous urges – a battle he eventually lost.

But now, after years of self-imposed exile, the man once known as Shadowman is returning home to sharpen the weapon within…and unleash a reckoning on the evils of our world that will soon send shockwaves through heaven and hell alike…

In the epic tradition of X-O MANOWAR and BLOODSHOT REBORN, Shadowman storms to the forefront of the Valiant Universe – more powerful, more terrifying, and more relentless than ever before – in an adrenaline-fueled ongoing series from superstar writer Andy Diggle (Green Arrow: Year One, The Losers) and high-octane artist Stephen Segovia (Action Comics)!

After being lost in the Deadside, Boniface has returned just in time for a new incarnation of “Shadowman,” a comic book superhero story taking place in New Orleans. Unfortunately, Jack doesn’t show up until the halfway through the debut issue, when a portal magically opens. Diggle spends a lot of time redefining Boniface’s relationship with Alyssa, and her new status, that there isn’t much time for much more content. At times, Diggle’s script and dialogue between Jack and Alyssa also feels as if it has forced conflict for the sake of giving the two characters something to argue about and justify the amount of time both of them have on the page.

Thankfully, the scene with Jack and Alyssa arguing eventually gives the two characters a chance to confront a more supernaturally-based threat. The idea of Alyssa becoming a mambo is an innovative one and ups the ante with an actual conflict. It was also a solid idea when it came to Boniface: getting the chance to see a surprise villain in a different circumstance is also enjoyable. Unfortunately, the cliffhanger on the final page introduces an element difficult to witness in today’s political climate.

“Shadowman” #1 is a sleepy, subdued affair, only offering the slightest tease at what is to come. The issue does not contain the focus and vision to bring Shadowman towards a more cohesive direction. The idea of a superhero based in New Orleans using powers linked to voodoo is an inherently good idea but with so many comics creators having little exposure to either factor making the character interesting, “Shadowman” ends up falling into the trap of being a by-the-numbers superhero story doing little to truly set it apart from its contemporaries. Having so many superhero titles on store shelves makes it really difficult to stand out in this space.

Artist Stephen Segovia turns in solid, concise work which can look slightly too minimalistic at times. Segovia does a good job with the juxtaposition between the normal and supernatural elements of the comics as he mixes the final battle with a harrowing confrontation of mystical and grounded elements. Segovia’s core strength lies in his depiction of the horror elements as beautiful smoke billows out of villain Baron Semdi’s cigar and the final page features a big reaction from Alyssa.

“Shadowman” #1 is a mixed bag, not leaving me hopeful for the future of the series. Without a core direction for Boniface or a solid idea changing the way he views the world around him, the title stumbles out of the gate. The forced conflict in earlier scenes also fails to show why this character is special or who Jack Boniface is as a man. The idea of Alyssa turning into a mambo and taking a more central role in the story is a good one, but she still doesn’t quite get much to do in the narrative and the final page plays into some of my worst fears regarding the character and direction of the story overall. After putting the hero into retirement for so long, I had high expectations with where Valiant would take Boniface next, unfortunately, this issue fails to live up to those impressions.