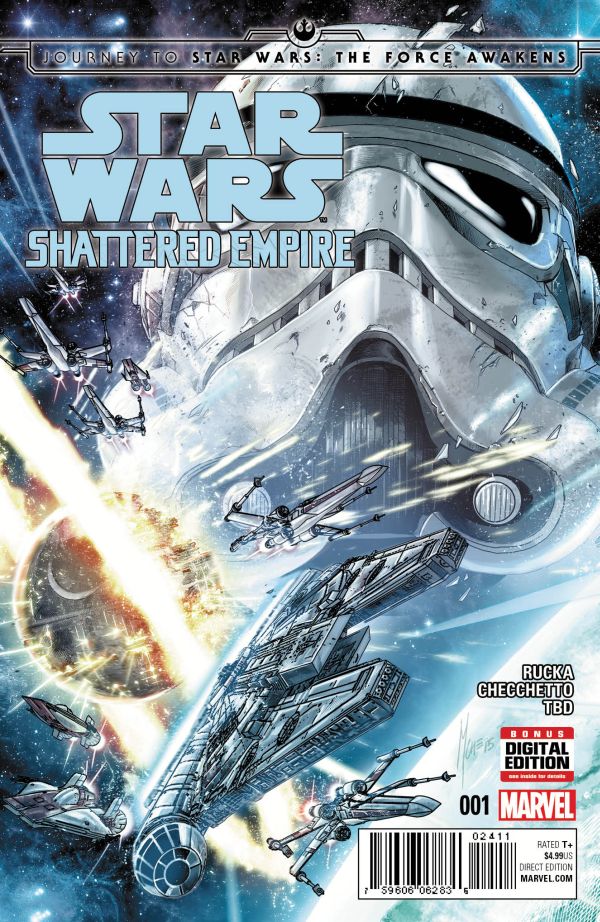 After much waiting and much teasing, the post-Return Of The Jedi world is finally taking shape. Greg Rucka and Marco Checcheto present us with what the end of war looks like through the eyes of people who aren’t named Han, Luke or Leia in “Journey To Star Wars: The Force Awakens: Shattered Empire” #1. Read on for our review but be warned, there are mild spoilers. 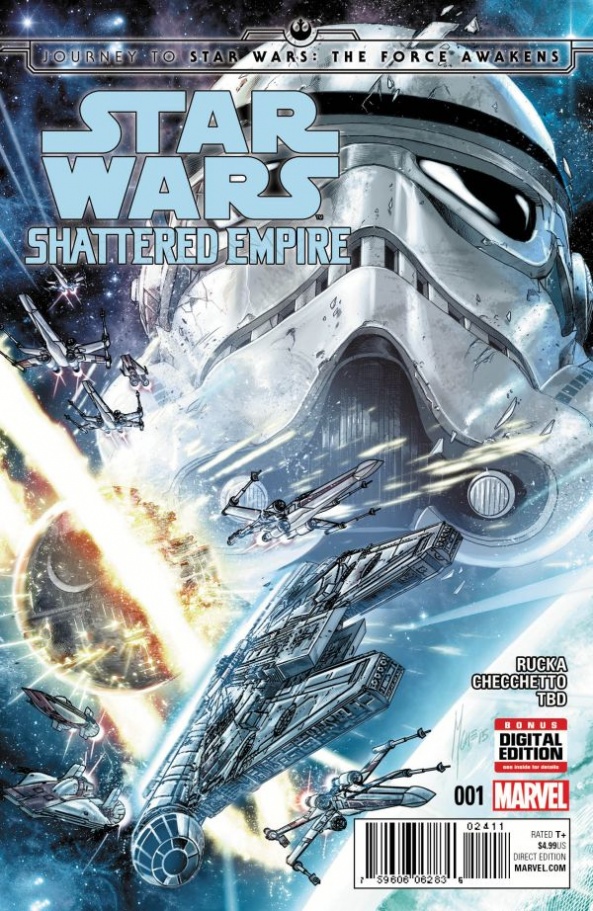 Written by Greg Rucka
Illustrated Marco Checcheto
For the first time in the new Star Wars canon, journey with us into the time after the end of Return of the Jedi! Writer Greg Rucka (PUNISHER, WOLVERINE, Gotham Central) and artist Marco Checchetto (AVENGERS WORLD, PUNISHER) take us past the destruction of the second Death Star into the chaos of a Shattered Empire.

Marvel’s “Star Wars” books haven’t been terrible but they’ve heavily relied on already established characters and an established mythology. “Shattered Empire” really feels like the start of something new and with the movie only a few months away, it becomes one of the most intriguing and potentially most exciting stories within Marvel’s “Star Wars” universe.

“Shattered Empire” #1 begins at the end of war. Palpatine is gone, Darth Vader is dead, but in the air, the Rebels are still fighting off an Imperial ship. After an exciting fight, we’re introduced to Shara Bey, a pilot for the Rebels who comes back to the base to search for her husband Kes Dameron, a member of a different strikeforce. Things go the way of the films with everyone celebrating until something happens and they realize that just because Darth Vader is gone, it doesn’t mean the war is over.

Greg Rucka, writer of the just released novel “Smuggler’s Run: A Han Solo & Chewbacca Adventure” is proving himself to be a great fit for the Star Wars universe. The most appealing things about “Shattered Empire” are the new characters. As much as I love the original characters, I believe there’s only so much story that can be told about them within the confines of their established history. Han Solo, Lando and Chewbacca are featured early on and Rucka does a great job giving them their distinctive voices. However, it’s with the new characters that he does his best work. Shara and Kes allow us to see the rebellion from a different perspective and this perspective is one much more grounded to the smaller parts of this universe. There’s a wonderful detail early on where the characters talk about the loss of soldiers.

With Star Wars, we tend to only see the major characters who are a part of leading the rebellion but they don’t necessarily fight in all the fights. Rucka makes it a point to show that there’s this sense of loss in this great victory because all those who were in the sky fighting, aren’t coming home to see the world after the Empire falls. Shara isn’t concerned with the fall of the Empire immediately because something more important was on her mind – her husband, a person she cares about deeply. It doesn’t diminish her character at all and offers us a new romance to get behind.

Speaking of romance, this is where the mild spoilers come into play. “Shattered Empire” is seemingly setting up one of the new film’s most important characters – Poe Dameron. Little is known about him but given his last name, you probably wouldn’t look too silly guessing that these are his parents. Without spoiling the meat of this comic, “Shattered Empire” may end up being a crucial piece of backstory for the upcoming film and this is why I’m more excited for this story to unfold than any of the other series currently ongoing.

As good as Rucka’s writing is, Marco Checchetto’s art is phenomenal. From the very first page I was blown away by the scope of everything Checchetto does. The opening is a big double page splash featuring the end of Return Of The Jedi. Luke and Vader are locked in battle and surrounding this is a massive aerial fire fight. It’s a beautiful spread that immediately draws you back into the world of Star Wars. Checchetto handles all of the action heavy scenes in the same detailed and careful way as the opening splash page. The shots of the ships flying through space, thanks to the angles, feel like they’re moving and even when the focus is Shara, Checchetto does not let up and features well defined backgrounds to help establish how much danger she is in.

The character designs are excellent as well. Shara and Kes have different uniforms that easily align them visually with different group within the rebellion. Helmets, jackets and consoles on the dashboard feel almost tangible and panel space is used perfectly. At certain points, Checchetto features ships breaking out of the panels at bit and it adds to the proportional differences between the ships. The characters are expressive and there’s a wonderful tinge of Old Hollywood romance when Shara and Kes are together. Andres Mossa’s colors truly bring Checchetto’s to life thanks to the layered levels of grey. The ships don’t feel washed out or static and the light off the lasers adds a cool effect to the aerial fights. Mossa does something truly stunning with the coloring of debris. He uses different shades for different pieces of broken ships and it makes “Shattered Empire” feel fully immersive. A Star Wars comic book relies heavily on art, moreso than any other licensed property and Checchetto and Mossa deliver the goods.

“Shattered Empire” is going to probably end up being the most important of all the Marvel “Star Wars” series thanks to it’s foreshadowing to later events and characters. The first issue is an exciting read that anyone looking forward to the movie, cannot miss.

Final Verdict: 8.4 – “Shattered Empire” #1 is a great start to a series that feels like it’ll mean something for the new film.