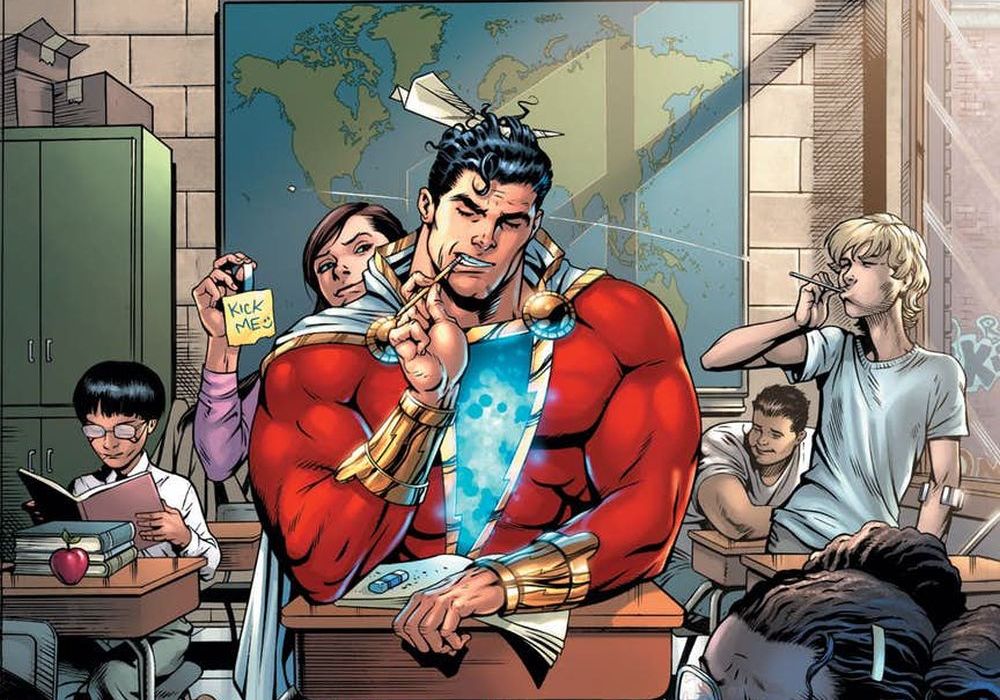 It has been a very long time since the last ongoing, in-continuity, Captain Marvel/Shazam series. The final issue of “The Power of Shazam!” was released when Bill Clinton was President of the United States, cell phones were still a novelty, and the #1 song on the Billboard charts was “Angel of Mine” by Monica. Since then, there have been miniseries, one-shots, back-ups, an all-ages title, and team appearances, but no book you could count on, month in and month out, for your Marvel Family kicks in the DCU.

That all changes this week, with “Shazam” by Geoff Johns and Dale Eaglesham hitting shelves. Does it live up to the hype? Has it been worth the wait? Keep reading for our spoiler-free review. 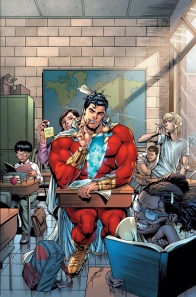 The superstar team of writer Geoff Johns and artist Dale Eaglesham reunite to launch the first all-new SHAZAM! monthly title set in the DC Universe in almost 20 years! (What took you guys so long?!)

Teenager turned super-hero Billy Batson struggles to balance school and superheroics! (Guess which one is more fun?) But when Shazam unlocks a shocking secret deep within the Rock of Eternity, it challenges everything he knows about the worlds of magic and his family’s future as its champions! Also, witness the bizarre team-up of Dr. Sivana and Mr. Mind as they set off to build a society all their own! Don’t miss the start of an epic run in the making as “Shazam and the Seven Realms” begins!

Following up a year or so after the events of the New 52 “Justice League” backup, “Shazam” #1 brings readers directly into series with minimal catch-up required. Geoff Johns and Dale Eagleshame do just about everything they can to make this a cohesive experience for the reader, from a short prologue to a few scenes introducing the extended cast. While this might sound excessive, there is minimal exposition happening on the page, especially when considering that, aside from Billy himself, none of these characters have been seen in five and a half years. Obviously, the book works better if you are familiar with the aforementioned “Justice League” backup, but almost all the information you need is found in this one issue.

The issue also feels really true to the history of the character without, for one panel, being nostalgic. The driving force of this is Dale Eaglesham’s art, which is bombastic and fun, the two key elements of any good Marvel Family story. Shazam (I’ll never get used to not saying Captain Marvel) is literal wish fulfillment for kids: say a magic word, stop the bad guys. His best adventures feel fun, because a kid would have a blast being able to fly and be super strong. Eaglesham’s art never forgets that, and shows Billy smiling ear to ear while beating up common thugs.

Eaglesham also does some important refining of the Shazam costume. Gary Frank’s initial version in the “Justice League” back-up was overly complicated, and muddied one of the cleanest, most iconic costumes in comics. Eaglesham keeps the basics of that redesign – glowing lightning bolt, full length cape, more traditional hero’s belt – but simplified it a bit and allowed it to not be so ostentatious, though that glowing bolt still looks goofy.

Johns works hard to give all the members of the Shazam Family – and they’re right, they do need an actual name for their group as well as individual codenames – a brief moment to shine, and establish the dynamic between the foster siblings. As mentioned earlier, this issue rarely feels nostalgic in its approach to the Marvel Family, but instead continues to push a new narrative that is similarly hopeful. The Vasquezes are presented as simply good people, with no agenda other than to help kids. The siblings had some growing pains initially, but a year in they seem to be gelling as a family at home and in the superhero game.

That may sound boring, as conflict drives good stories, but there are other types of conflict than just intra-team/family conflict, something a lot of poor team book writers tend to forget. Marvel Family stories were always about finding family in unusual places, and that continues here and, hopefully, Johns will continue to push that narrative.

There’s a cliffhanger at the end of the issue that pushes against that very idea and, while borrowing a visual trick from “Kingdom Come,” puts an interesting twist on the traditional Billy Batson story. If there’s a criticism of the story to be had here, it is that, aside from the kids finding a new area of the Rock of Eternity, that moment is really the only part of this issue that acts as forward momentum in the issue. This is very much an introductory issue and, after five plus years, it is necessary. But without that last page reveal, the issue may have felt a little too cornered off from what will come next.

With no offense to Eaglesham, the best part of this issue is the back-up by Sen. A fan artist who did a lot of Marvel family drawings on Twitter, Sen and Johns tell a side story about Mary’s arrival in the Vasquez home, and then jump time into the main story. Sen’s art is clearly manga-influenced, and the look is absolutely perfect for this story. The story is, both in text and visuals, much more personal than the Eaglesham-drawn segment. That is a superhero story; this is a family story.

The artwork carries with it empathy, emotion, joy, and an amazing surprise last page. (This issue loves its last page reveals, doesn’t it?) The pairing of these two styles is extremely effective, and allows the issue to scratch multiple itches. It also allows the book to feel like the opening of a door to an entire world, not just the titular character.

That also pairs well with the newfound focus on magic in the DC Universe as of late. “Justice League Dark” is a title that seems like a logical crossover point somewhere in the future, and there are plenty of other places where this crew can fit in throughout the DCU. It will be really interesting to see how the character of Billy is treated versus the other five members of the family in terms of integration. For instance, could Darla be integrated into the Teen Titans without the rest of the family?

But that’s what is so intriguing about the title: it is a team book, but not. It’s a superhero comic, but not. It’s bombastic, but personal. It’s lighthearted, with a sad undercurrent of abandonment. It feels modern, but doesn’t stray far from the classics.

Final Verdict: 8.5 – A solid debut with a stunning backup, that promises a lot for the future.