“Shazam!” #3 continues to expand the new mythology around Billy Batson and his family, as they transverse the seven realms of magic. And while the art is astounding, the plot is not breaking any new boundary. 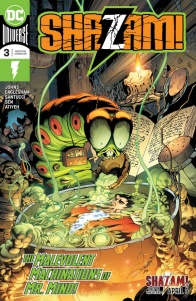 “SHAZAM! AND THE SEVEN REALMS” continues! Billy Batson’s world is turned upside down by a figure from the past while Mary, Freddy and the rest of the Shazam Family enter a realm of endless amusements, candy factories and friends in the Funlands! But what’s the catch? Plus, a shocking development within the Library of Eternity!

The return of a regular series for Shazam has been one long gestating within DC and one much anticipated by fans of the current interpretation introduced by Geoff Johns during the ‘New 52’ era, as well by those more aligned with the classic Captain Marvel moniker from back in the day. Such a series, with any ambition to accommodate readers with so diverse backgrounds and links with past versions of the character, was sure to have a challenge balancing tone, plot and art. For the most part, “Shazam!” #3 succeeds on that topic more than it fails, even if it means compromising any ground-breaking plot introduction so far.

Making some comments clear out of the bat: the art, mostly by Eaglesham, with contributions by Santucci and Naito, with colors by Atyeh, is a marvel (pun intended) to look at. Talking about Eaglesham first, the sheer level of detail, layers, background information, without sacrificing any sort of narrative flow clarity, is incredible. This is particularly valuable in situations like the one shown on the current arc, where so much world building is happening. It is almost as if these pages become gateways to these new realms, so effectively, that it alleviates a lot from the writer’s prerogative to explain what is happening through narration or other expository devices. It is simply there for the audience to take in.

Another point worth of notice, is how Eaglesham’s art has evolved over the years to accommodate body types different than the usual super-heroic trope. Longtime readers of “Fantastic Four,” for instance, might recall complaints about Mister’s Fantastic overly bulky frame, one unusual and unrepresentative for that character. Not so on “Shazam!” #3, which is critical for a book featuring so many kids and teens. These body frames are typical of their age and growth, which reinforces the contrast of when they go through their transformation into their super-bodies.

Santucci and Naito contribute on specific sections of the book, either because they take place in other physical places, or during other periods of time. While jarring when used incorrectly, this combination of artists work really well on “Shazam!” #3, with the baton being passed apparently effortlessly among them. It accentuates the strengths of each of them, making them unique and well-suited for their piece of the story.

While all of this is happening, colors by Atyeh tie it all together, by reinforcing that consistency. It also links the art to the broader tone of the plot, that of a bright, cheerful even, adventure, with incredible places and situations.

Where “Shazam!” #3 is a bit of mixed bag is on Johns’s overall plot. While one can argue that all comic book stories have been told, the approach and script of this story does feel generic and predictable in a number of ways. Travels through dimensions or realms that are thematic in some shape or form, local tyrants and despots that are adverse to change, the inherent nature of protagonists clashing with those of these places. Perhaps what is missing from this particular story is an unique angle, an unique perspective to keep it fresh. Instead, readers (and not necessarily not only those of the old variety) will probably guess the twists and turns coming their way from miles in the distance.

Not all is at a loss, though. The interaction among the Shazam family is very heartfelt and endearing, with no one acting out of place or in a forced manner. Instead, these kids and teens react to the situations around them as one might expect of them and their age, seeking comfort, help and support as naturally as presented to readers. And while some attitudes do seem archetypical (Mary acting like the surrogate wiser “mother” is a good example), it does avoid most of tropes pitfalls unscathed. Finally, the ongoing subplot back at the “real world” is the silver lining in terms of unexcited and mysterious situation, providing some anticipation for what comes next.

All in all, “Shazam!” #3 is not a bad comic book – and far from it given its incredible art – but one that readers might feel they’ve read too many times over. Without an obvious component to make it unique, it seems satisfied to revisit past situations.

Final Verdict: 6.9 – “Shazam!” #3 fails to present compelling new reasons for its purpose, but its gorgeous art and some sub-plot interest should keep the audience moving along.