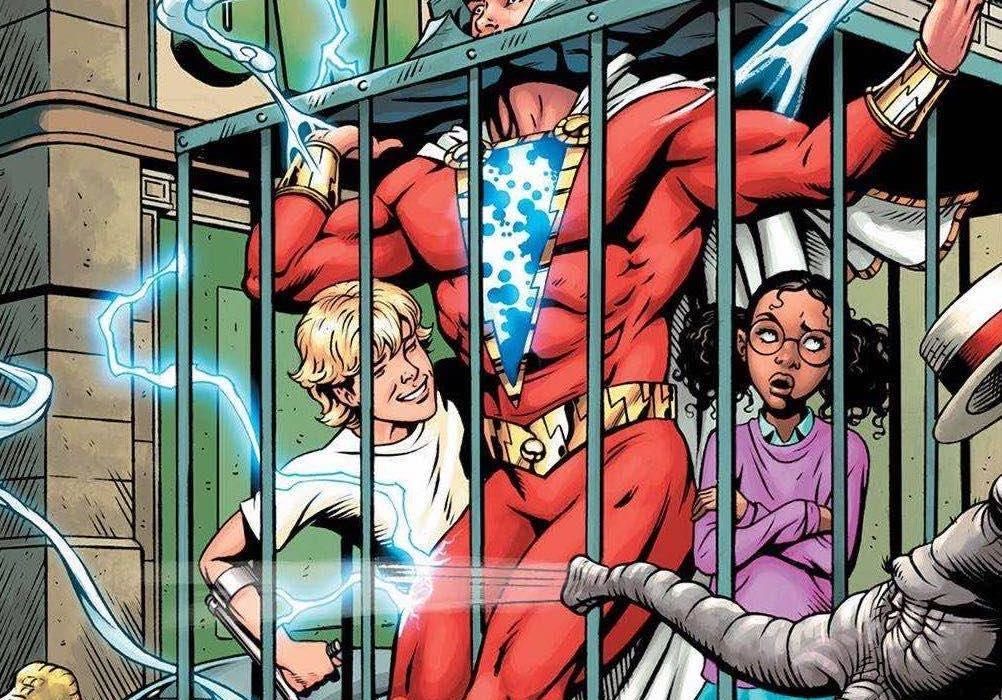 With a huge film only a few weeks away, DC’s “Shazam!” has never been more in-demand as a property. In a nice exercise of synergy from the publisher, “Shazam!” as an ongoing series has carried a fantastic burst of enthusiasm and optimism to-date. The series has continued the adventures of Billy Batson following the New 52 interpretation of the hero. Batson comes from a broken home drifting from foster family-to-family before he finally manages to find one perfectly suited to him. Writer Geoff Johns and artist Gary Frank’s new interpretation of the character proved controversial when it was first introduced. Since then, the hero has gone on to serve the film origin of the character as well as this brand new ongoing series that recognizes how Billy has grown as a person. With the wild new adventure into the Magiclands on the itinerary, will “Shazam!” be able to keep up the momentum from past issues? 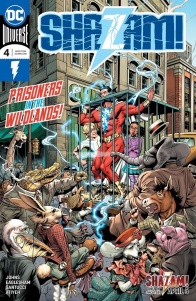 “Shazam and the Seven Magiclands”continues as Billy Batson and the other foster kids are lost in the dangerous Wildlands! A realm where animals walk like humans…and where humans live in zoos! When Freddie and Darla are captured and paraded around like oddities, it’s up to Billy and the others to rescue them from the greedy Crocodile Men! Plus, the shocking ending to issue #1 could up end Billy’s new family…or make it stronger than ever.

Readers have been clamoring for a truly fun spin on the core “Shazam!” title since before DC’s Rebirth initiative began in 2016. “Shazam!” has proven to be the positive reinforcement instrumental to DC’s publishing line as an ongoing series. Now that readers are emotionally invested in the cast of characters, Johns has gone headfirst into some world building of the title as a whole. “Shazam!”#4’s greatness is in all of its firsts. Readers get to see extended looks the Gamelands, Funlands, and lands of fall shapes and sizes.

Johns has certainly hinted at the direction for the “Shazam!” title but never before has he embarked on such an ambitious script for the series. The comic switches between nearly half-a-dozen storylines at leisure, imbuing the narrative with an incredibly manic pace. Now that Billy has met some peace with the rest of the cast, it is incredibly wise of Johns to give the script a breakneck pace with plenty of new villains and heroes. Johns introduces some beloved existing Batson characters that will get longtime fans of the character incredibly excited for what comes next.

The opening gag in the script introducing a new land is one of the best pieces of writing in the title thus far. Johns introduces a wild comedic element to the series soaked in irony and visual gags. Getting a Mark Russell-inspired approach to a “Shazam!” comic book from Johns with this cast is a wild prospect that is executed incredibly well. The issue has a slightly difficult job trying to mix all the genre elements of the comic book together in addition to keeping up the tension with each storyline. Pedro and Eugene’s Gamelands adventures barely get started before it is time to flip the script and head over to the next scene.

“Shazam!” has done an excellent job mixing up the artists for each issue and Marco Santucci’s contributions to the title are no exception. Santucci’s dreamlike pencils carry a manic tension almost as potent as series regular Dale Eaglesham’s pencils. Over the past few years, Eaglesham, in particular, has refined his pencils with a sleek horror aesthetic. The pit of slaves in the Funlands are a perfect outlet for his insane take on the property. As if the slaves weren’t frightening enough, Eaglesham’s clowns continue to inspire the nightmares within my dreams. The opening sequence is also a great example of showing and not telling within the issue and another creative art choice in the issue.

“Shazam!” #4 has a wonderfully inspired visual direction that matches the irreverent tone of the script. There are a couple of pages from Santucci that don’t carry enough detail which does slightly detract from the experience. The bold approach to the colors and linework give the issue a great visual cohesion even when the title is switching line artists and settings. “Shazam!” #4 takes a lot of risks directly with setting and location with the title. While not as irreverent and horror-influenced, I want to see going forward how Santucci develops as an artist and what readers can expect to see from him next.

In the context of modern creators, it is astounding how many characters Johns has added to the DC mythology thanks to the Green Lantern property. However, Johns continues that same sense of experimentation with “Shazam!” #4. When readers were worried that Johns scripts were going to take on a more formulaic nature, “Shazam!” #4 throws the conventions out the window mixing several lands into one singular arc and even issue. Watching so many groups of characters and ideas come to a head in just one sole issue proves that “Shazam!” can be developed past an origin story outside of the battles between Billy and Dr. Sivana. Also, the last page bringing a Johns-friendly character back to the DC Universe is a welcomed addition to the line. It also doesn’t hurt that Shazam continues to look beautiful from cover-to-cover.

Final Verdict: 8.0 – “Shazam!” #4 takes huge risks with the structure and ideas within the property that makes the issue feel like something special.