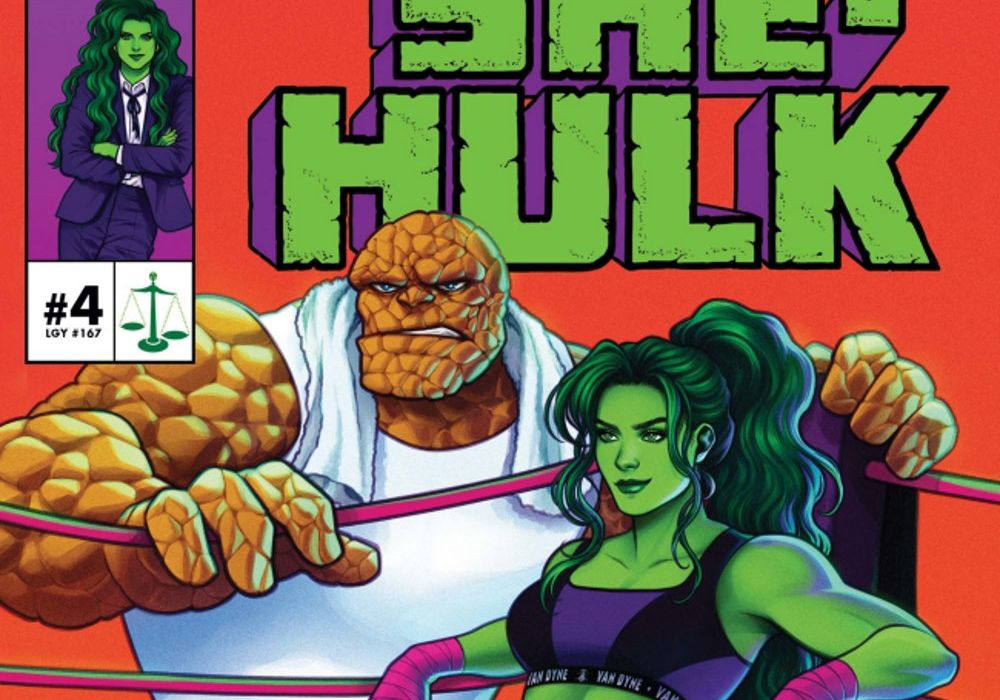 A “She-Hulk” series is can’t miss for me. She’s just one of my characters. Fortunately, Jennifer Walters is one of those characters who has been blessed with more good series than bad ones. That is all to say, I was an easy mark when they announced a “She-Hulk” series by novelist Rainbow Rowell. I’m also very critical of writers who cross over to comics from other media. That’s not always an easy transition to make. But through wonderful collaboration with artist Luca Maresca and colorist Rico Renzi, “She-Hulk” #4 is a breezy issue and a delightful read. 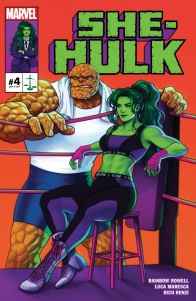 Super Fight Club is here and She-Hulk isn’t going to break the rules. Good thing Rainbow and Rogê are going to break the first rule and talk about it just for you. Jennifer Walters never promised (us) not to break rules at her day job. Rule #1? No super hero clients. She did promise her boss, though, so…

So I just flipped through the entire issue again and yeah, it’s clear and simple. You open an issue of “Saga,” on most pages you’ll find a six-panel grid. You open up a ponderous prestige book over at DC, and the pages will be filled with nine-panel grids. The average panel count on a page of “She-Hulk” #4 is maybe four? I count a lot of three panel pages as well. That’s easy for a reader to follow, and easy (well, easier) for an artist to draw.

But what does that mean for the story? You’re in for a slow issue. It’s leisurely. More than half of it is taken up by a conversation between Shulkie and Jack of Hearts. If you’d asked me, I would have told you that Jack of Hearts could stay dead and gone for all I cared, he’s a boring character with a weird look. But that’s where the slow pace works in the comics’ favor. We’ve spent quite some time sitting with the newly revived Jack of Hearts, and watched this everyday moments where he tries food for the first time, or appreciates the joy of flying. In most Marvel books, you’d get that for a scene. In “She Hulk” you get that for four very decompressed issues.

There’s not a lot of kineticism in Luca Maresca’s art. He draws poses much better than he draws action. There’s arguably a fight in the first couple of pages but most of the blows happen before the story starts or between the panels. And then it’s mostly meetings and sitting and walking. The thing is, all of that plays to Maresca’s strengths. His faces are really expressive so he can rock a subtle close up, and his landscapes have a lot of character. He captures details in Central Park like he’s pointing a camera, finding cool angles and textures. I recognized specific corners in the background in the Brooklyn scenes.

Rico Renzi makes it all sing with some lovely autumnal colors. Comics come out monthly, but the story has committed hard to orange leaves and turquoise skies and looks all the better for it. And when the star of your story is big and green, you want a colorist who knows which green to use. Plus Jack of Hearts has that aforementioned weird design, but seeing him in a baggy t-shirt helps mitigate things. Now his weird appearance is incongruous to something, instead of just going unnoticed.

All of this proves to me that Rowell is a good collaborator. Writing a novel is more of a solo experience, but Rowell shows that she’s great at writing scripts to her artists’ strengths. On top of that, she’s one of my favorite working novelists and her dialogue is a joy. The decompression serves to make “She-Hulk” more of a romantic sitcom, and that’s not exactly an over-represented genre in Marvel. Rowell’s books are some of the sweetest romances around, and it’s lovely to see modern comics embrace stories that work in books.

What brings it all together is, I love Rainbow Rowell’s Marvel universe. For a Nebraska girl, she does a great New York City. I love her character voices. Reed Richards shows up for a second in this, and makes me seriously want to see what a Rowell “Fantastic Four” series reads like. And she brings in some deep continuity, like Titania’s BFF Volcana, and that time Spider-Man taught the Beyonder how to poop. Rowell manages to to show off her love for Marvel trivia while making fun of it a <i>little</i> bit, and moving the story forward.

It’s not a perfect issue. Rowell’s last page cliffhangers really leave me cold. But the rest of the issue is a fun, simple, readable comic. More than that, it’s the kind of superhero comic you don’t see nearly enough of. Read “She-Hulk” because it’s a good comic yes, but also read it because it’s different than any other Marvel superhero book on the stands.

Final Verdict: 9.0 – A good series gets even better. I want to see Rowell’s takes on every Marvel character ever, and that’s a huge compliment!