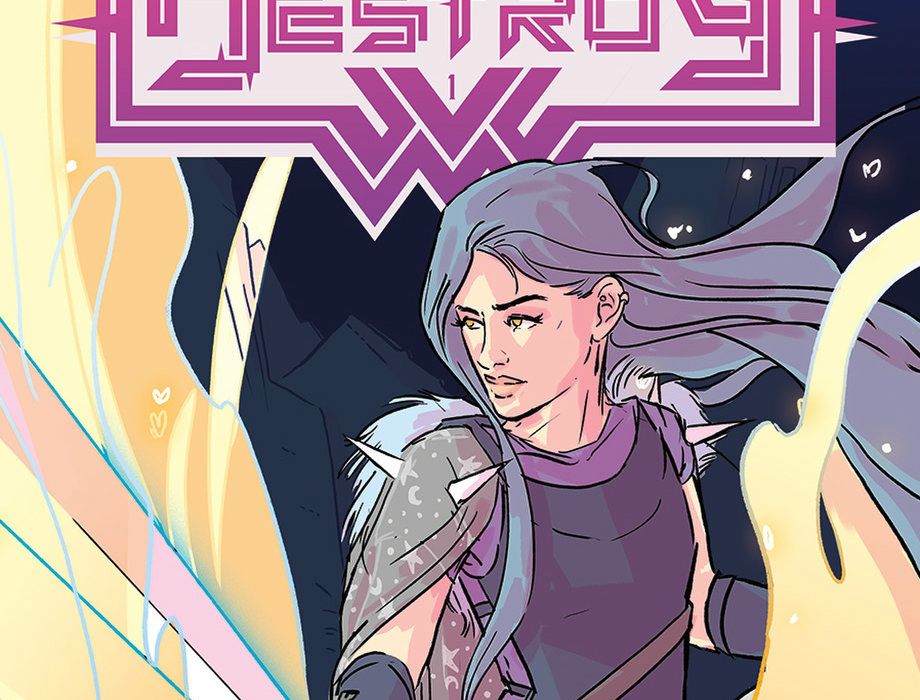 “She Said Destroy” #1 tells a story of gods, faeries and humans caught in between with some nice visuals and storytelling stumbles. Warning: minor spoilers ahead. 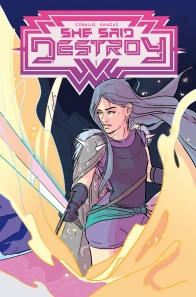 Cover by Liana Kangas
Written by Joe Corallo
Illustrated by Liana Kangas
Colored by Rebecca Nalty
Lettered by Melanie Ujimori Over millennia, Brigid, Goddess of the Sun, has conquered and converted the entire solar system into worshipping her and her alone, save one space colony. The witches of Fey are the last believers of The Morrigan, Goddess of Death, Brigid’s sister and the only other God left. As Brigid’s forces prepare for one final battle, The Morrigan prepares to do what she does best: Destroy!

“She Said Destroy” #1 has its origins in the current magical girl/fantasy zeitgeist in comics. It’s easy to see echoes of the works that came before, from “Saga” to the concurrent “Blackbird” and “The Wicked + The Divine,” and creating more of the same, or similar, storytelling isn’t necessarily a bad thing. Completely original content is hard to come by, and a unique main character or authorial voice can shed new light on well-trod narrative paths. Unfortunately, “She Said Destroy” pairs a relatively familiar concept with thin characterization, and the first issue doesn’t pack the punch it should.

“She Said Destroy” opens with off-screen narration from the Morrigan, who’s the last god alive and remembered other than Brigid, her fascistic sister. Brigid’s slowly converted or conquered all of civilization in the solar system to her worship, and now seeks to wipe out the Morrigan and her small knot of devoted worshippers. The first page features a slow zoom in on the capital city, while the Morrigan fills us in on the premise. This immediate reliance on narration instead of visual storytelling is jarring, as the next page introduces Winona. Corallo uses the Morrigan’s point of view unevenly throughout the issue, and it often feels overbearing when there’s other action on the page. Additionally, Corallo’s dialogue throughout issue #1 is largely expository, with very little interiority to give the cast distinct personalities or up the stakes in this cosmic struggle. There’s one moment in particular in which Brigid repeats a phrase that feels like an authorial mistake instead of authentic voice or character building. We’re told explicitly that Winona is the favorite of the fairies, but we’re not shown why in any meaningful way, and most of the plot points are delivered via dialogue that fights with the Morrigan’s narration. With no clear way into Winona’s character, quick cuts between the background cast and not enough consistency from the Morrigan, this first issue can’t clinch world-building or interiority. Unfortunately, it’s pretty easy to bounce off as a result.

Kangas’s art is airy and delicate, with a loose line and spare facial details that add to the dreaminess and wonder of the book and sustain visual interest as the plot falters. Some of the action in “She Said Destroy” feels too loose and unchoreographed, however. Jackelyn’s scene features some explosive panels with odd angles and perspectives that slow the conflict’s pace. There’s also an occasional layout issue, as when Jackelyn breaks her knife and the eye doesn’t necessarily follow the motion down to the effect in the panel below. The intent here is to transition smoothly between Jackelyn’s spellwork and its effect, with each action building tension as Brigid’s soldiers close in, but it’s not always clear where we should be reading next or what’s going on. Kangas’s interior scenes and Winona’s journey into the forest play much better, as there’s less dynamic action to capture and more lovely background details to feature.

Nalty’s colors enhance Kangas’s art pretty well, with an occasional choice that feels a little too pastel or gentle to carry the oomph it needs in an action scene. Nalty also chooses some bright backgrounds for a few inset panels that are too harsh to complement the overall palette, and they can jump off the page for the wrong reasons. However, Nalty’s work overall sells this world as one made by a goddess of the Sun and the fairies, with bright backgrounds and pastels that fade into deeper blue greens as Winona travels through the forest. If the Morrigan and her followers will be more active in subsequent issues, as the end seems to suggest, some darker tones would be welcome to help contrast Brigid’s eternal sunshine, and Nalty has the chops to deliver that tonal shift.

Ujimori picks borderless balloons for dialogue and a lovely narrative box for the Morrigan that blend well into Kangas’s and Nalty’s bright pages. The font is clear and perhaps a bit too blocky to sell the dreaminess of the book, but it’s readable and adds a little style and gentleness to some of the more stilted dialogue. The Morrigan’s font is distinct, but Ujimori doesn’t add too much additional flair. There’s just enough to distinguish it and make that thread feel a little otherworldly, which is exactly what’s required.

Overall, “She Said Destroy” feels too packaged and sanitized to support its chaotic premise. There’s a lot going on in terms of plot on the surface, but the characters don’t feel deep enough to hook readers in a first issue or mysterious enough to keep reading. By the time the cliffhanger hits, there’s very little edge or conflict established to earn it. “She Said Destroy” features some lovely visuals and a delightful color palette, but the action scenes falter because the storytelling doesn’t have enough drive to propel us through, or enough depth to merit an extended dive into the chosen story beats.

Final Verdict: 5.0 – “She Said Destroy” #1 features a nice visual style, but can’t penetrate its characters or its plot enough to deliver a compelling story.