In comics, sagas unfold over dozens of issues. It is far rarer for creators to deliver a hyper-condensed story on par with the famous flash fiction above, that is exactly what Ryan K Lindsay and Chris Panda do with this first volume of “SHE”. While it is only 44 pages long, “SHE” Volume 1 manages to introduce the core cast, send the titular character on a mission she arguably shouldn’t have accepted, and deal with its galaxy-spanning consequences. Lindsay’s dense writing plays off of Panda’s neon stylings and striking character designs to shoot the reader with equal doses of thought-provoking moral questions and explosive action that is riveting from cover to cover. 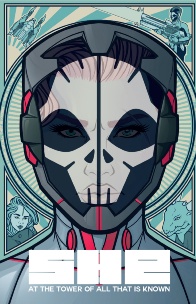 Written by Ryan K. Lindsay
Art and letters by Chris Panda
“SHE” Volume 1 follows an She, an intergalactic espionage agent, as she embarks on her latest mission to extract information from a pair of complete unknowns. The onboard computer for She’s ship attempts to get She to grapple with her past trauma, but She dives headfirst into the mission, assuring the computer that everything is fine. It most certainly is not.

The character design for titular character She draws the reader in from the cover page. Chris Panda brings She to life in a manner that befits her life story – cool, confident, and collected, but with a prominent facial scar to mirror her embattled profession and personal history. Panda shows great care in the designs of the few characters present in the book, from the calming, lumbering Murdoch, to the inquisitive and caring computer, to the targets of She’s mission, and beyond. There are some immersive blur effects in the segments devoted to She’s memories, making them look like they’re playing on an old VHS tape, with sections conveniently lost to time and corruption. Panda plays with panel layouts and effects in order to allow “SHE” Volume 1 to be visceral, contemplative, and everything in between, sometimes within the space of a couple of pages. The only aspect that occasionally faltered were the sound effects. While they were mostly on point, with one particularly gut-wrenching ‘SCHRIP’ the highlight for me, there were some occasions where an effect felt too generic for “SHE” Volume 1’s particular world. This was most evident when the same ‘THOOM’ effect was used in panels that immediately followed each other. Perhaps they were used in this way as a form of dramatic repetition, with the same sound accompanying different images to show that they have the same cause, but I would have appreciated even some slight distinction between the effects. On the whole, though, Panda’s linework and color palette meld to give “SHE” Volume 1 a neon-lit, futuristic aesthetic that helps to lighten the cerebral beginning of the book and keep it from becoming bogged down in grand concepts.

In line with a large portion of Ryan K. Lindsay’s work, grand concepts form the core of “SHE” Volume 1. The first page that has posits that ‘[t]here’s a galaxy of f***ed up obstacles and problems between knowing the truth and understanding it.’ She wrangles with a past littered with decisions she has made with varying levels of morality and care, and tragedies that befell both She herself and those she impacted as a result. She has to justify taking on the mission at the core of the comic to an artificial intelligence controlling her ship. On the mission itself, She is faced with a choice which could impact the entire metaverse. These are heady sci-fi notions, and Lindsay and Panda handle them masterfully. They present the ideas and concepts to the reader without feeling preachy or overly academic, and woven into the visual narrative seamlessly. “SHE” Volume 1 is the story of a woman with a history that should have broken her coming to terms with herself and the universe in the way that she feels most suits her. It may not sound like a book that can simply breeze by, but “SHE” Volume 1 does just that.

The way that it can do this comes down to Lindsay and Panda’s ability to distill every aspect of the book down to its essence, and only show what is entirely necessary to the story. They trust the reader to fill in the unexplored details. We don’t need to know what She and Murdoch are drinking at Black Hole Party. We don’t even need to know the names of She’s targets. In other stories, these facts might be essential, but in “SHE”, they would only hamper the momentum of the book. They would cloud the clarity that Lindsay and Panda have so carefully crafted. “SHE” Volume 1 is not looking to create a Tolkien-esque universe where everything is explored and explained in minute detail. It exists to evoke feelings, illuminate paths for further intellectual exploration, and kick some ass while doing so, and at this it emphatically succeeds.

“SHE” Volume 1 is a comic that I can see myself coming back to regularly. With each read, I see new shadows, new wrinkles in all aspects of the book, and the condensed nature of the narrative means that the journey of “SHE” is neither a long nor arduous one. The creative team have announced their intent to return to She and her adventures, and this first volume of “SHE” gives readers reason to be tremendously excited at this possibility.

Final Verdict: 8.7 – “SHE” Volume 1 is a finely-distilled sci-fi graphic novella crammed with both visual and intellectual delights.